Japan looks set to blow past its previous best gold medal tally at the upcoming Tokyo Games, an analyst's prediction showed Tuesday, with a projected 26 Olympic titles giving it 10 more than the nation's previous high.

If the country can achieve that level of success by the time the games close on Aug. 8, sports data and analytics provider Gracenote Sports forecasts it will finish fourth on the medal table, its highest position in 53 years. 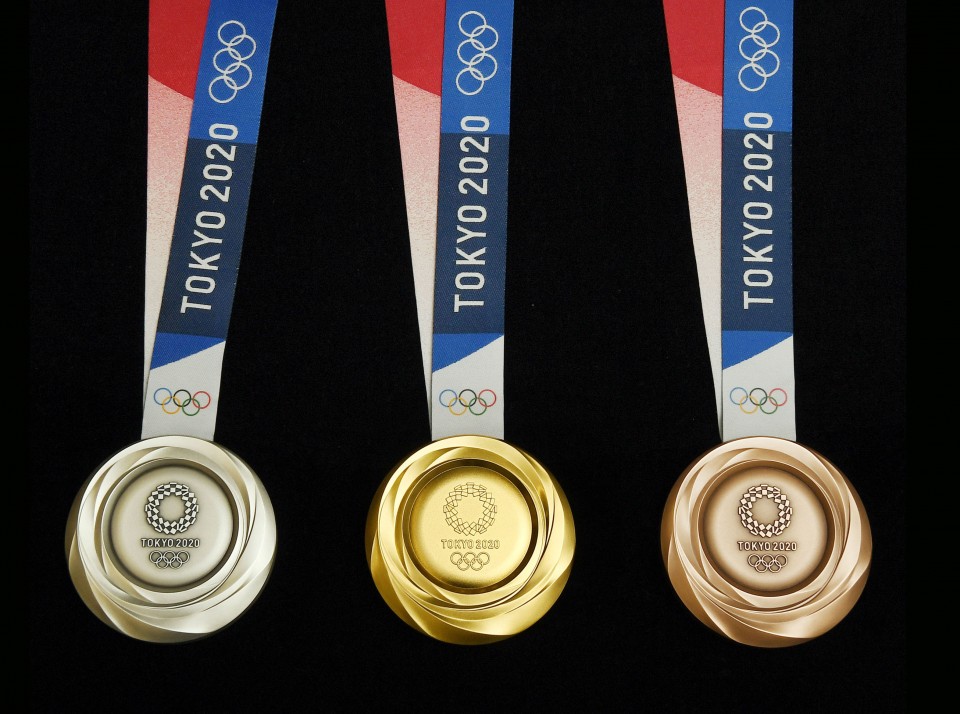 File photo taken in July 2019 shows (from L) the silver, gold and bronze medals of the Tokyo Olympics. (Kyodo)

A 26-gold medal total would be more than Japan collected at the Rio de Janeiro and London Olympics combined, and would best the 16 it won at both the 2004 and 1964 games, the latter the other time Tokyo played host.

The prediction game is far from simple at these Olympics, however, with pandemic-necessitated cancellations complicating calculations.

"This Olympics is even more unpredictable than usual," said Simon Gleave, Gracenote's head of sports analysis.

"Many events were canceled in 2020, and although they have been replaced with events held this year, athletes from some countries like China have not competed in those more recent events."

"In general, the medal totals for most of the top nations are not too far removed from what we would expect based on previous Olympics."

As for the overall medal count, Netherlands-based analysts' "virtual medal table" slots Japan behind the top-ranked United States, the Russian Olympic Committee, as Russia will be known at the games due to doping-related sanctions, and China.

If the firm's projection of 60 medals holds up, Japan will destroy its previous record of 41 set in Rio de Janeiro in 2016.

Gold medal headliners include some of the nation's most high-profile athletes, as well as some that may soon be known in households across the archipelago.

Tennis superstar Naomi Osaka is expected to return from her mental health break to take women's singles gold on her Olympic debut. While after 13 years off the Olympic program, Japan is tabbed to take both the baseball and softball crowns, a single-games feat only managed before by the United States in 2000 in Sydney.

If the predictions go to plan, Daiya Seto will emerge from the games as Japan's most awarded athlete. The 27-year-old is predicted to take the men's 200 and 400-meter individual medley -- Japan's only forecast swimming gold medals -- as well as a silver in the 200 butterfly.

The new sports added to the Olympic Games in Tokyo are a big reason why Japan might reach new medal-winning heights.

In the other two new sports, Tomoa Narasaki is tabbed to clamber to men's sport climbing gold, and Ryo Kiyuna is bound for the podium's top step in the men's individual kata karate.

Japan has never won an Olympic gold medal in any type of cycling, a run of futility that looks likely to end in Tokyo with the emergence of track stars Yumi Kajihara and Yuta Wakimoto, the former anticipated to take gold in women's omnium and the latter in men's keirin.

With the retirement of a number of big-name freestyle wrestlers, Japan's long history as a powerhouse in the sport looks set to end. Gracenote predicts it will win no golds, a significant drop off from the four it won at each of the past two games and the first time it will be without an Olympic title since 2000.