A group of citizens in Japan sought a court injunction on Friday to halt the upcoming Tokyo Olympics and Paralympics, arguing that going ahead with the games during the coronavirus pandemic violates the constitutionally guaranteed right to live.

The four citizens filed with the Tokyo District Court demanding that games organizers cancel the sporting events, saying the organizers have not provided grounds in which the global sporting events can be held in a "safe and secure" way to protect people. 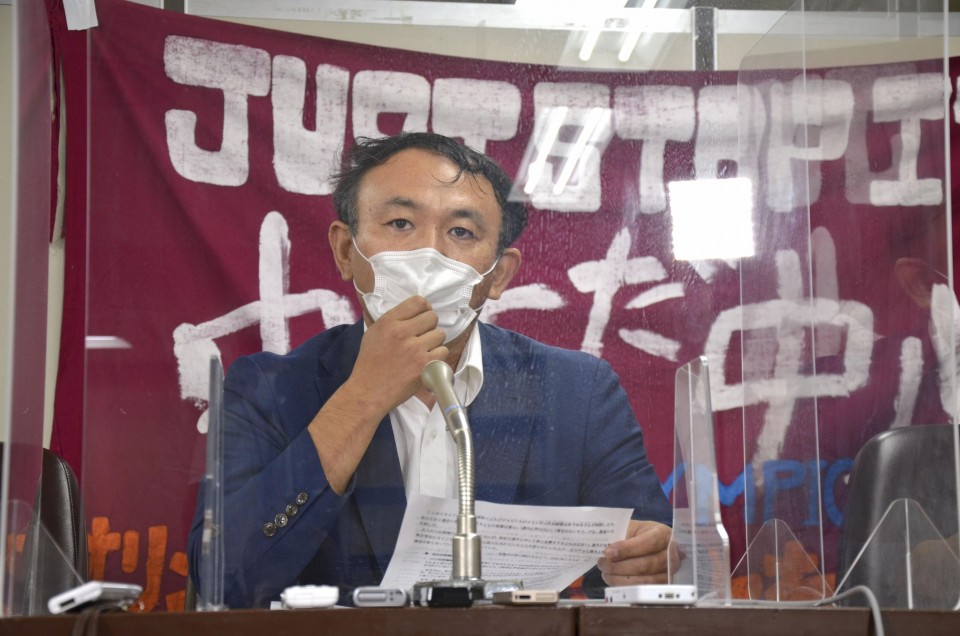 Satoshi Horiuchi, one of the citizens seeking a court injunction to cancel the Tokyo Olympics, speaks at a press conference in Tokyo on July 9, 2021. (Kyodo)

They also argued that the Tokyo Games cannot be operated without interaction with others, thereby increasing the risk of the virus spreading, according to the written complaint.

The move comes even though the organizers decided Thursday that no spectators will be allowed in almost all venues due to a surge of coronavirus cases.

Satoshi Horiuchi, who is among the four and belongs to an anti-Olympic civic group in Nagano Prefecture, said at a press conference in Tokyo that people coming into the country for the games, slated to begin July 23, could potentially worsen the spread of infections.

"It is clear that life is more important than a gold medal, so I want to push (the organizers) into canceling the games," the 50-year-old said.

The Tokyo metropolitan government declined to comment, saying it has not received the citizens' complaint.

On Friday, the Olympic torch relay started in the Japanese capital with a small-scale ceremony, a day after the government decided to put Tokyo under a fresh state of emergency covering the duration of the games.