People who volunteered for the Tokyo Olympics and Paralympics but whose stints have been canceled due to the coronavirus pandemic have joined a project to sing the anthems of 204 countries and regions taking part in the Summer Games.

Under the initiative, organized by the Nippon Foundation Volunteer Support Center, 1,318 volunteers, their families and friends are seen singing their hearts out in videos uploaded to YouTube to cheer the athletes as well as their fans overseas who could not travel to Japan due to the pandemic.

"We want to tell the world that we are cheering for the athletes" even though the games are being held under severe restrictions, said the support center, which launched the "Yell for one" project after many volunteers said they still wanted to play a part in the games. 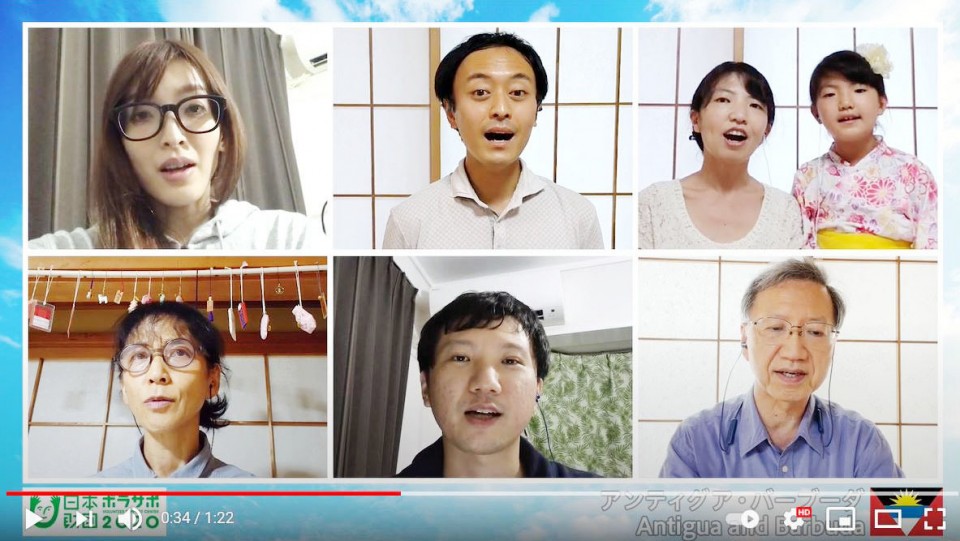 Screenshot of a video shows Akiko Shinoda and her family singing the national anthem of Antigua and Barbuda. (Kyodo)

Around 80,000 volunteers were set to take part in the Tokyo Olympics and Paralympics, but around 10,000 resigned due to concerns about the coronavirus as well as scheduling conflicts following the postponement of the games by one year.

Many of their activities were canceled after organizers decided to bar foreign and domestic spectators from nearly all of the venues.

They would have provided information to domestic and foreign tourists at airports, major train stations and sightseeing spots.

Among them was Akiko Shinoda, a 37-year-old resident of Chiba Prefecture near Tokyo who said she was "sad and very disappointed" that her volunteer activities had been canceled.

Shinoda studied English and sign language for the past two years so that she could communicate with visitors for the games. Her volunteer uniform remains unused with a tag attached to it.

She was supposed to guide visitors at Kaihinmakuhari Station, the nearest train stop to Makuhari Messe Hall, the venue for the wrestling, taekwondo, fencing and goalball competitions.

Though her hope was dashed, she decided to take part in a different way. Shinoda was joined in the singing project by her parents, who she could not meet due to the pandemic, her husband, daughter and brother.

They sang the national anthem of Antigua and Barbuda after it was assigned by the support center.

Shinoda initially did not know where the Caribbean islands are located. She practiced the song by hearing it over and over in her car and by posting the lyrics, written in Japanese in katakana characters, on the wall of her living room.

For the one-minute recording of the anthem, her 7-year-old daughter Yuwa wore a flower-printed yukata, a traditional outfit, and stood in front of "shoji" wooden sliding doors to promote Japanese culture.

"I couldn't work on the ground but I could do what I can for now and convey the spirit of hospitality. I hope the athletes will enjoy it," Shinoda said.

Yuwa said she "wants to visit" Antigua and Barbuda when the pandemic is over.

The videos of volunteers and others singing the anthems can be accessed at https://www.volasapo.tokyo/volunteer-info/yellforone/