Cities hosting the Summer Olympics are usually abuzz with anticipation in the buildup to what is the world's largest sporting extravaganza, with excitement reaching a crescendo as the curtain gets set to rise.

But on a hot and sunny Friday morning in Tokyo, hours before that evening's opening ceremony, enthusiasm was less evident than lament and regret that the athletic feats will happen largely behind closed doors with no spectators permitted as Tokyo battles a renewed surge of coronavirus infections.

While some 11,000 athletes from around the world have converged on Japan's capital, the games have effectively become a TV-only event with the city under its fourth state of emergency over the virus. 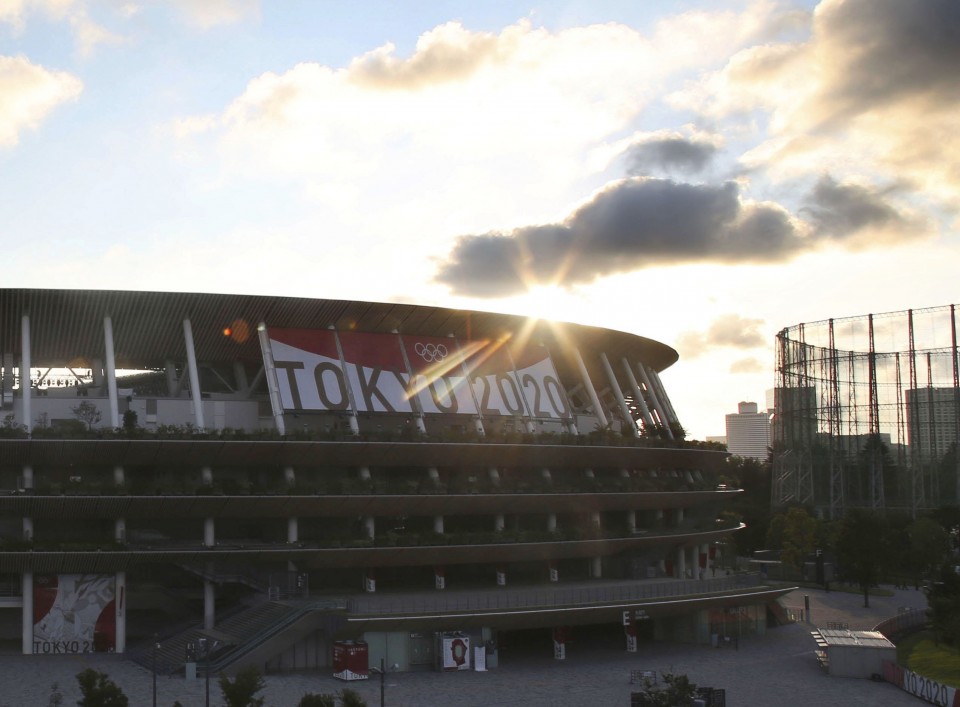 National Stadium in Tokyo is pictured in the morning of July 23, 2021. The opening ceremony of the Tokyo Olympics is set to take place there later in the day. (Kyodo) ==Kyodo

And with opinion polls continuing to show high levels of public unease over hosting the games during a pandemic, some on the streets of the capital said the event should not be taking place at all.

Yoyogi Park in central Tokyo was originally scheduled to host free live games broadcasts for large crowds but it is now being used as a mass COVID-19 vaccination site.

Walking among the many morning joggers and cyclists, Tetsuya Imai was on his way to get inoculated.

"I wish I could have watched the games here," the 52-year-old said wistfully. He now plans to watch the games on TV at home with his family.

Living near the athletes' village on the other side of town in Tokyo's Harumi waterfront district, he says he is well aware of the level of opposition to the games given the frequent protests near the site.

"I'm not so excited because there isn't an atmosphere of fun among the public," he said. "I hear protesters chanting outside every morning at home. Sadly, people are so divided over the Olympics."

Near Tokyo Stadium in Chofu in western Tokyo, which will host competitions in several events, including soccer, some residents were taking photos in front of the entrance.

"I came here just to see what the atmosphere is like," said Machiko Oyama, a Chofu resident. "If you consider the feelings of participating athletes, I think it was good that they decided to hold the games, even without spectators. Quite frankly, however, I wanted to watch the games live in a stadium."

The stadium hosted some 2019 Rugby World Cup games, and the 47-year-old recalled the lively sights and sounds as large numbers of foreign fans congregated in the area.

The contrasting somber atmosphere of the Olympics, she said, may leave the participating athletes from abroad "feeling somewhat unsatisfied."

The Japanese public's support for the games nosedived after the coronavirus pandemic began. According to a nationwide survey conducted by Kyodo News earlier in July, 87.0 percent of respondents said they were concerned about a potential spike in infections as a result of Tokyo hosting the games this summer.

Later on Friday afternoon, many people gathered in various locations around Tokyo, including the iconic Shibuya scramble crossing, to get a glimpse of the Japanese air force's Blue Impulse acrobatics team draw the Olympic rings in the clear blue sky over the National Stadium. 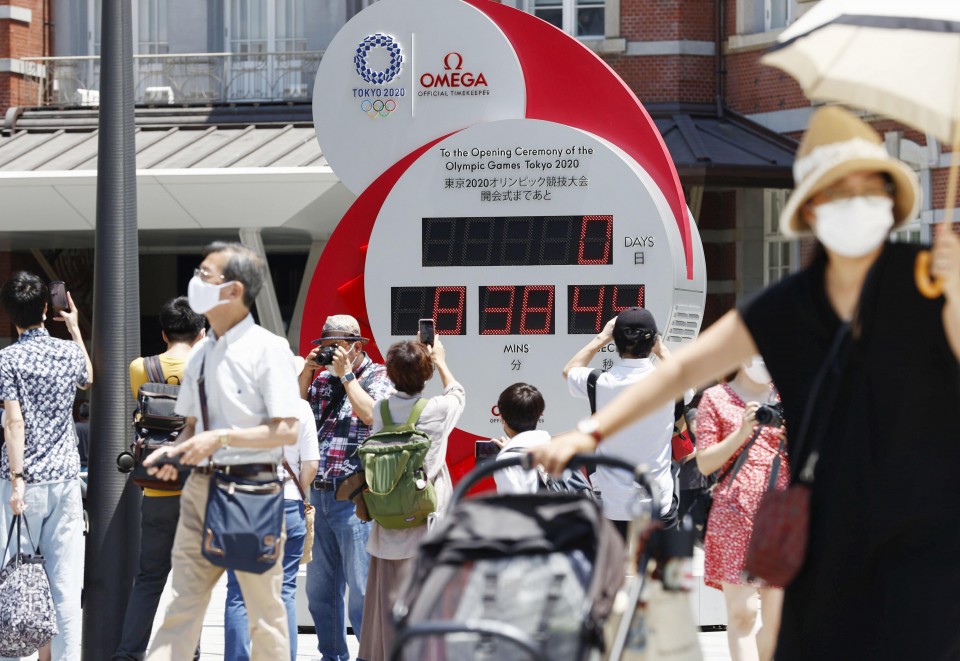 People take photos of a countdown clock in front of JR Tokyo Station on July 23, 2021, ahead of the Tokyo Olympics opening ceremony to be held later in the day. (Kyodo) ==Kyodo

Naoko Nakashima, a 43-year-old resident of Yokohama, brought her 10-year-old son to the crossing in the hope he might also see the performance.

She saw it in May last year when the jets took to the air in support of front-line COVID-19 health workers. Although she was moved by the flyover, she said it was "disappointing" she was only able to witness some of the show this time.

At Shinjuku Station in central Tokyo, Ayumi Miyagi, 41, and her mother from Tokyo's Nerima ward, were among the throng that formed to see the pilots perform.

"I've been refraining from going out as much as possible, but this time, I just wanted to feel a little happier," Miyagi said. "This is the first time to see the Blue Impulse live, and I was very moved," she said.

She had won a ticket through the lottery for a track and field session and been looking forward to watching, but said, "It can't be helped, so I'm rooting for all the athletes through TV, because I believe they've spent their lives readying for this."

Elsewhere, Yui Iwakura, a manager of a sports bar in central Tokyo, said he has mixed feelings about the Olympics being held. "I don't feel like the Tokyo Olympics are starting today," the 37-year-old said. "As I was born and raised in Tokyo, I was looking forward to it."

Since the government declared the current state of emergency in the Japanese capital, his bar has been closed due to a request from the Tokyo metropolitan government to temporarily do so as part of efforts to stop the spread of the virus. 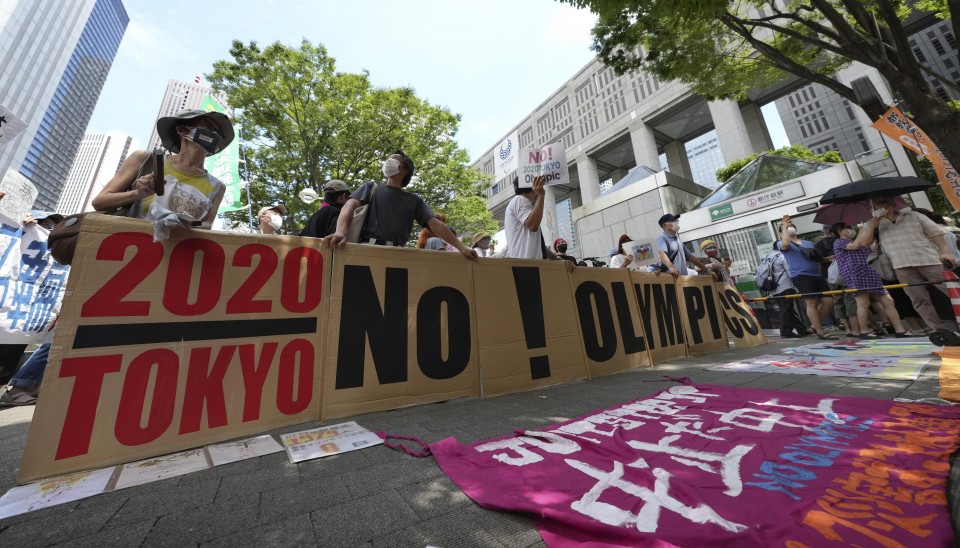 People gather near the venue of the Tokyo Olympic flame arrival ceremony in the Japanese capital on July 23, 2021, calling for the cancellation of the Summer Olympics. The opening ceremony is set to take place later in the day. (Kyodo) ==Kyodo

His bar is usually a place for foreign tourists, residents and Japanese sports fans to gather and watch games on large screen TVs. "I was expecting the Tokyo Olympics would bring many customers in, just like during the 2019 Rugby World Cup and other international sporting events." Now, instead of working at a busy bar, he plans to stay at home and watch the games with his family.

"Although we cannot watch the games at venues, I still think the Tokyo Olympics will be a good inspiration and encouragement for my kid," he said.

Meanwhile, dozens of people surrounded by police officers gathered in front of the Tokyo metropolitan government office earlier in the day. Protesters chanted "Extinguish the Olympic torch" and held banners bearing slogans such as "No Olympics" and "Global crime against Japan."

While Tokyo wrestles with COVID-19 infection numbers at their highest in six months, the 17-day games will conclude on Aug. 8.

One of the protesters, Kenichi Nakamura, said, "Fukushima is still in the progress of recovery and now we are facing this global health crisis." The 39-year-old said, "We cannot host the Olympics under such circumstances."

(May Masangkay, Keita Nakamura and Ami Takahashi contributed to this story)