Mai Murakami rebounded from a difficult start at the Tokyo Olympics to post the best ever finish by a Japanese woman in the individual all-around gymnastics on Thursday, placing fifth behind gold medalist Sunisa Lee of the United States.

In a competition missing defending champion Simone Biles, Lee claimed a four-round total of 57.433 points at Ariake Gymnastics Centre, followed by Brazilian silver medalist Rebeca Andrade with 57.298 and Russian Angelina Melnikova, who took the bronze with 57.199. 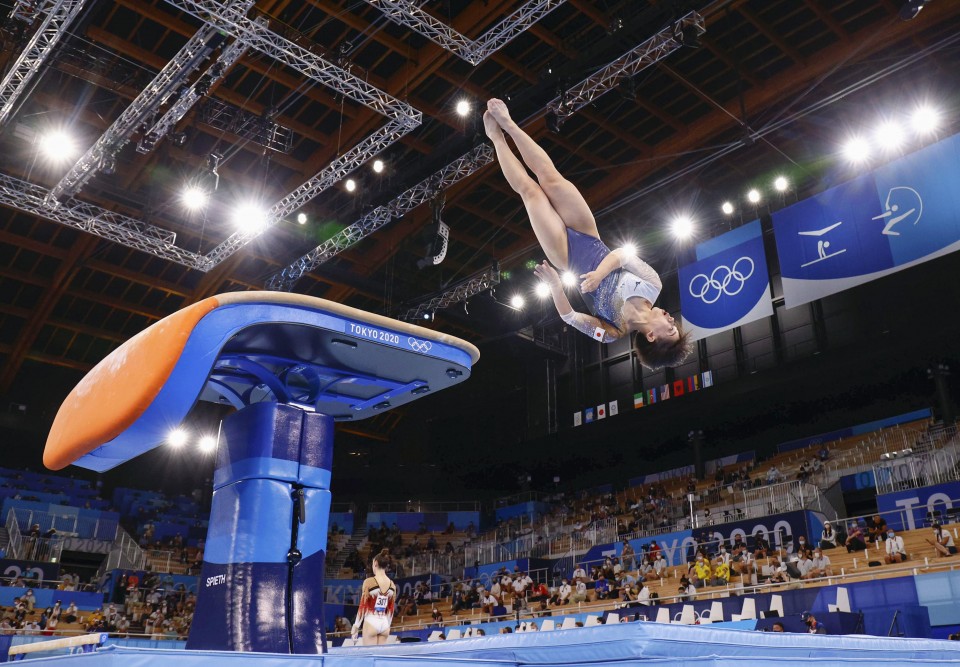 Japanese gymnast Mai Murakami performs on the vault in the women's all-around final of the Tokyo Olympics on July 29, 2021, at Ariake Gymnastics Centre. (Kyodo) ==Kyodo

Lee's gold was the United States' fifth straight, the Americans having won the event at every Olympics since the 2004 Athens Games.

Murakami, who qualified for the 24-woman final with the 23rd-highest score, performed all four routines without any major errors, while sticking a tremendous landing on the vault en route to 56.032 total points.

"I wasn't able to reach the podium, but I was able to execute as usual," she said, referring to disappointing performances in the team event and in qualifying.

Her fifth-place finish was one better than Keiko Ikeda's sixth at both the 1960 Rome Olympics and 1964 Tokyo Games.

Although Murakami had a solid start on the balance beam, she was 10th after the first rotation. But from there, she vaulted up the leaderboard.

The 24-year-old, the 2017 floor exercise world champion, delivered a dynamic performance. She landed her signature "Silivas" move, a double twisting double tuck somersault, with ease and led the field with a 14.000 on the apparatus.

She concluded her event with a flawless routine on the uneven bars, and tears flowed as she stepped down from the mat. She afterward said she was competing with an elbow injury and was unsure whether she would be able to compete.

"But I didn't want to give up because I've been doing gymnastics in order to compete in Tokyo (at the Olympics). But the pain prevented me from feeling too nervous and I was able to perform the way I wanted," she said.

As Biles watched from the stands, the 18-year-old Lee wrapped up her night with a solid routine on the floor, right after she nearly fell from the balance beam in her third rotation.

Biles, who top scored in qualification, pulled out of the event in order to focus on her mental health. She also withdrew during the women's team event on Tuesday in which the U.S. team finished second.

The American, who won four golds at the Rio de Janeiro Olympics, opened up at a press conference about the pressure she has been feeling, casting light on and inspiring discussions about mental health issues faced by athletes. 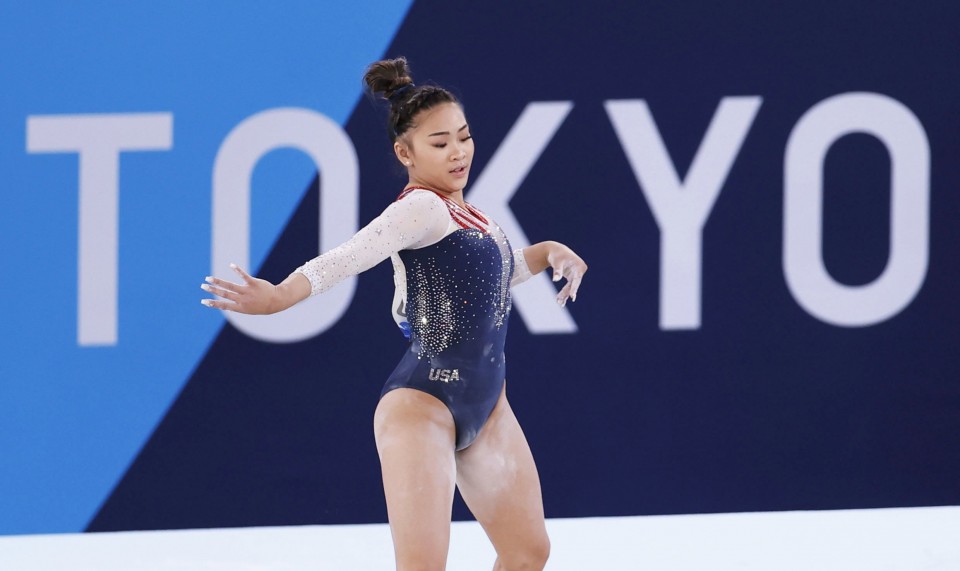 U.S. gymnast Sunisa Lee performs on the floor in the women's all-around final of the Tokyo Olympics on July 29, 2021, at Ariake Gymnastics Centre. (Kyodo) ==Kyodo