The foreign ministers of Japan and Guatemala, which has diplomatic relations with Taiwan, agreed in a meeting in Guatemala City on Friday to cooperate in upholding open and rule-based international order as tensions continue to rise across the Taiwan Strait.

Japanese Foreign Minister Toshimitsu Motegi's meeting with his Guatemalan counterpart Pedro Brolo came as China has been increasing its clout through COVID-19 vaccine diplomacy and infrastructure investments with Central American and Caribbean nations. Guatemala and eight other countries in the region maintain diplomatic relations with Taiwan. 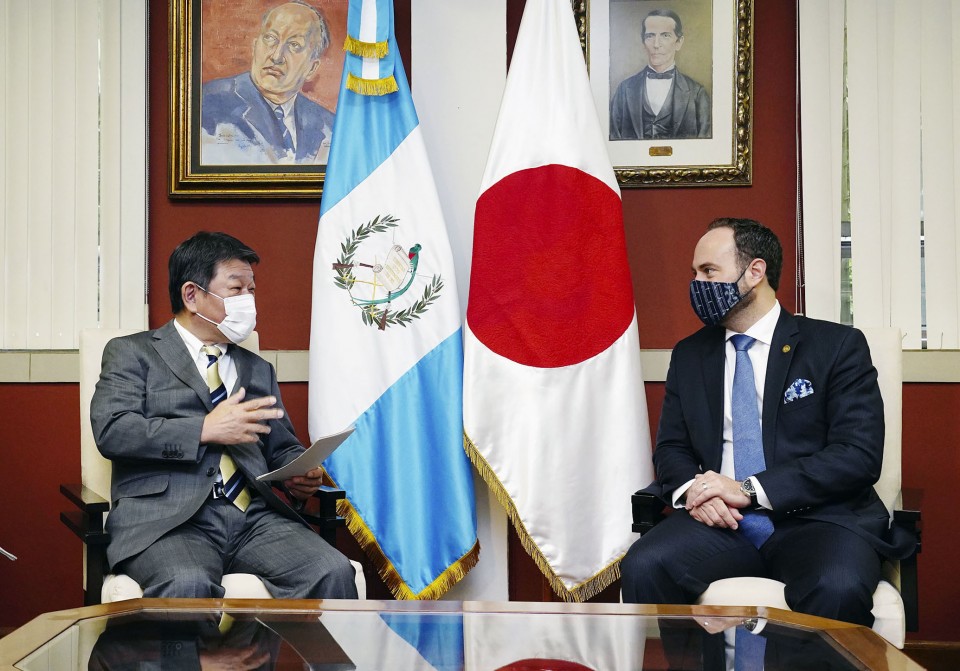 Communist China and democratic Taiwan have been separately governed since they split in 1949 as a result of a civil war. Beijing regards Taiwan as a renegade province awaiting reunification, by force if necessary.

"I hope to further strengthen the bilateral partnership with Guatemala," which shares universal values such as the rule of law, democracy and the respect for human rights, Motegi said at the start of the meeting.

Motegi later said in a joint press conference he and Brolo shared a view that strengthening their countries' ties is important especially when the international power balance is rapidly changing and becoming more complex.

Brolo said in the press conference that Japan-Guatemala relations are strategic and that there is room for growth in bilateral trade.

Motegi also announced the provision of $2.8 million in emergency aid to Guatemala to assist in its reconstruction from hurricane damage last year.

The Japanese minister also held talks with the foreign ministers of the Central American Integration System -- an eight-country regional bloc that aims to boost economic integration -- of which Guatemala currently holds the rotating chair.

The bloc members showed their understanding toward the Japanese government's decision to release treated radioactive waters from the crippled Fukushima nuclear power plant to the Pacific Ocean, according to the ministry.

In a separate meeting in Guatemala City, Salvadoran Foreign Minister Alexandra Hill told Motegi the country is eager to deepen its ties with Japan in addressing global issues and thanked the Asian country's support in the fields of poverty, public safety, infrastructure development and human resource development.

The Japanese minister will also visit Panama and Jamaica before returning to Japan. His planned trip to Cuba on Monday was canceled, Cuban and Japanese officials said. There have been a series of anti-government protests in Cuba recently.

The latest tour follows Motegi's visits in January to the Latin American countries of Argentina, Brazil, Mexico, Paraguay and Uruguay.

His visit to Guatemala marked the first such trip to the country by a Japanese foreign minister in 34 years, the Japanese ministry said.