Prime Minister Yoshihide Suga may have been counting on the Tokyo Olympics to buoy public sentiment before calling a general election this year, but the games could turn into his biggest liability with the recent surge in COVID-19 cases.

Olympic organizers agreed Thursday to ban spectators at venues in and around the capital after the government decided to declare a fresh state of emergency through Aug. 22. 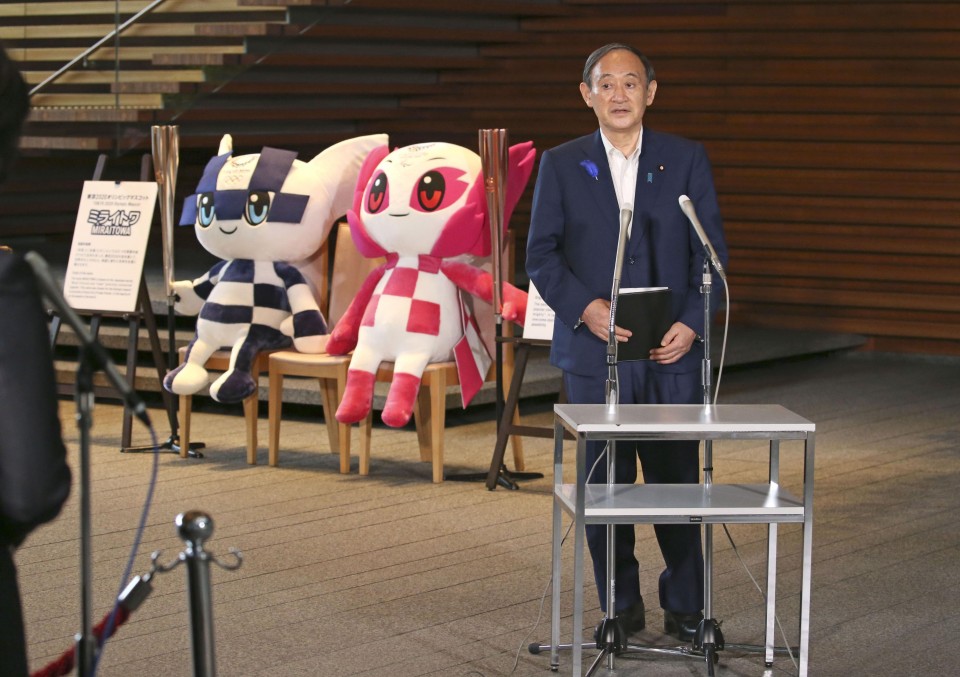 Prime Minister Yoshihide Suga speaks to reporters at his office in Tokyo on July 9, 2021. (Kyodo)

The Olympics, due to begin July 23, were already going to be held under extraordinary circumstances -- they were postponed by one year due to the coronavirus pandemic, parts of the nationwide torch relay have been taken off public roads, and athletes and staff are being subject to rigorous quarantine and testing rules.

Following the decision on a fourth COVID-19 state of emergency for Tokyo, Suga reiterated his mantra at a press conference that staging the Olympics and Paralympics this summer would represent humankind's triumph over a health crisis that has taken millions of lives and upended the global economy.

But not being able to have spectators in the stands is a particularly severe blow for the prime minister, who had hoped to allow up to 10,000 people per venue before the sharp rise in infections essentially took the decision out of his hands.

Upon taking office last September, Suga's strategy had been to vaccinate the population against COVID-19 as quickly as possible, stage a successful games to get a boost in public sentiment, and dissolve the House of Representatives for a general election to consolidate his grip on the ruling Liberal Democratic Party.

"And that may actually still work, particularly if Japan happens to get a big medal haul," said Hitoshi Komiya, a professor of Japanese political history at Aoyama Gakuin University in Tokyo. "People won't have anywhere to go because of the state of emergency, so there will be a lot of them watching at home on TV."

But Suga is facing criticism for going ahead with the Olympics even as restaurants are being banned from serving alcohol and told to close early under the state of emergency.

"Why are the Olympics being given special treatment? He needs to explain the reasoning better," Komiya said.

Infectious disease experts including Suga's own COVID-19 adviser, Shigeru Omi, have warned the Olympics could become a launch pad for infections to skyrocket, especially considering the spread of the highly contagious Delta variant of the virus first detected in India.

Omi on Thursday said that while serious cases were declining among the elderly thanks to the rise in the vaccination rate, they were climbing among people in their 40s and 50s, a trend not seen in previous waves.

An outbreak at the Olympic athletes' village, for example, or at venues outside the Tokyo metropolitan area where some spectators are allowed could be disastrous for Suga, who faces an LDP leadership race in September.

The 72-year-old leader is already under fire as being too slow to impose business restrictions under a state of emergency in the past and too quick to lift them, and for a vaccine rollout that has progressed in fits and spurts.

About 60 percent of respondents in a Kyodo News poll conducted in June said they do not support the government's COVID-19 response, compared with about 36 percent who do.

The public dissatisfaction came to a head in this month's election for the Tokyo metropolitan assembly, where the LDP and its coalition partner Komeito failed to win a majority of seats despite forecasts for a solid victory.

The current four-year terms of members of the powerful lower chamber of parliament end Oct. 21. Casting a long shadow over the general election is Tokyo Gov. Yuriko Koike. 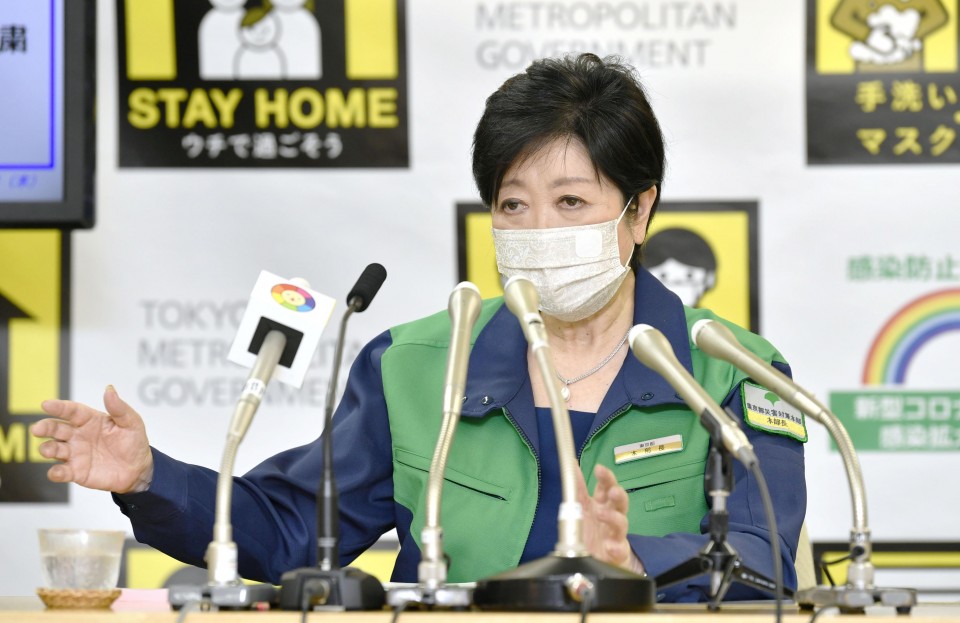 Tokyo Gov. Yuriko Koike attends a press conference at the metropolitan government headquarters on July 8, 2021, after the central government decided to place Tokyo under another COVID-19 state of emergency until Aug. 22, covering the duration of the Olympics in an effort to arrest a recent surge in infections. (Kyodo) ==Kyodo

The regional party she founded, Tomin First no Kai, did unexpectedly well in the metropolitan assembly election, fanning speculation she may attempt a return to national politics.

Koike said at a press conference Friday she has "absolutely no intention" to do so, insisting she is committed to the capital's response to the pandemic.

But if she changes course and chooses to run in the general election, she could become a powerful challenger for prime minister, Komiya said.

"Mr. Suga may want to wait until Ms. Koike's current wave of popularity dies down, or for her to make a misstep, to call the election," he said.

Meanwhile, opposition parties are ramping up their criticism of the government's trudging ahead with the Olympics, with Yukio Edano, leader of the Constitutional Democratic Party of Japan, on Thursday lambasting the Suga administration as "unfit to govern."

But bad blood between the Japanese Communist Party and the Democratic Party for the People will likely prevent the opposition from forming a united front against the ruling coalition in the general election, making a change in government unlikely, Komiya said.

"Ultimately, the LDP has nothing to worry about," he added.