Land prices in Japan fell 0.5 percent on average in 2021 from a year before, down for the first time in six years due to loss in demand by foreign visitors amid the novel coronavirus pandemic, government data showed Thursday.

The data released by the National Tax Agency showed that land prices as of Jan. 1 fell in 39 of the country's 47 prefectures, with metropolitan areas of Tokyo, Osaka and Aichi, and 10 other prefectures suffering a setback after rising in the previous year. 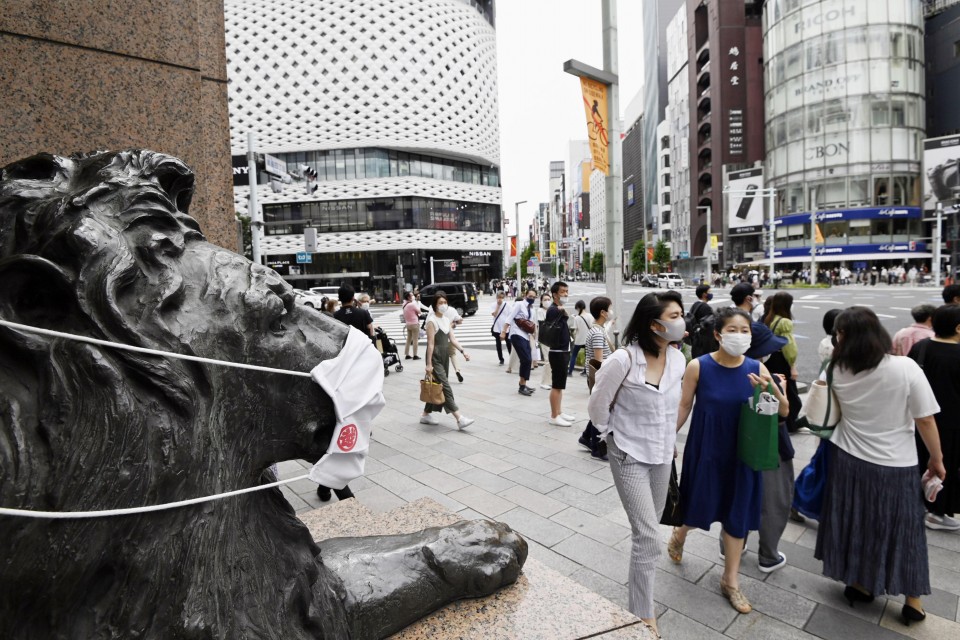 People wearing masks to protect against the coronavirus walk in Tokyo's Ginza area on June 26, 2021, the first Saturday after the COVID-19 state of emergency was lifted in the Japanese capital at the end of June 20. (Kyodo) ==Kyodo

Shizuoka saw the steepest decline of 1.6 percent, followed by Gifu and Ehime, both down 1.4 percent. Many other prefectures expanded their margin of decline.

Land prices in seven prefectures rose, down from 21 prefectures last year, with the margins of increase narrowing.

Fukuoka saw the biggest rise of 1.8 percent. While prices in Okinawa climbed 1.6 percent, the margin of increase shrank steeply from a 10.5 percent hike last year.

Of the 47 prefectural capitals, prices fell in 22, compared to one last year, particularly at tourist spots and downtown areas usually popular with inbound travelers.

The Omiya street in Nara saw a fall of 12.5 percent, Sannomiya Center Gai shopping street in Kobe a drop of 9.7 percent and Midosuji avenue in Osaka a decline of 8.5 percent.

Land prices in eight capitals rose, down by 30 from a year before, supported by development projects. Seventeen remained at the same level.

A plot in Tokyo's Ginza shopping district, in front of Kyukyodo stationery store, marked the most expensive piece of land in the country for the 36th year, fetching 42.72 million yen ($384,500) per square meter.

But the price represented a fall of 7.0 percent from the year before, the first drop after rising for seven consecutive years.

Land designated as evacuation zones in parts of Fukushima Prefecture following the 2011 nuclear disaster continued to show no value in the data.

The tax agency's annual survey of prices per 1 square meter of land facing major roads as of Jan. 1 covered about 325,000 points across the country this year. It is used for calculations of inheritance tax and gift tax.