Great Britain made history on Saturday by winning the first-ever Olympic gold in the triathlon mixed relay, with the United States securing silver and France bronze.

The Japanese team of Yuko Takahashi, Kenji Nener, Niina Kishimoto and Makoto Odakura finished 13th out of 16 teams that completed the fast-paced race, a four-person event featuring two men and two women from each country. 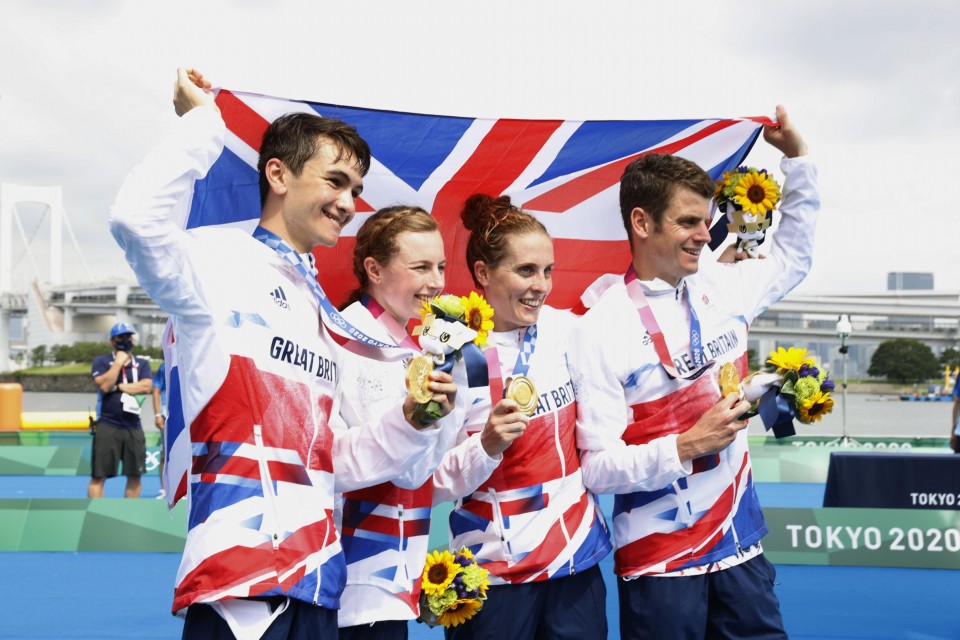 Britain's team members celebrate after winning gold in the triathlon mixed relay at the Tokyo Olympics on July 31, 2021, at Odaiba Marine Park in Tokyo. (Kyodo) ==Kyodo

"Racing a new event was fulfilling and fun. We didn't get the result we hoped for, but we all did our best. I have no regrets. There's joy in being a part of a relay team and I was motivated to do well," said Odakura.

In a high-octane Olympic debut for triathlon mixed relay at Tokyo's Odaiba Marine Park, each athlete completed a supersprint distance consisting of a 300-meter swim, draft-legal 6.8-kilometer bike and 2-km run before tagging off to the next teammate.

Japan, who finished 3:21 behind Great Britain, received a costly penalty after Nener and Kishimoto tagged off outside the exchange zone in the second transition. The 10-second penalty was served in the fourth leg and potentially cost them one place in the race.

In the men's race which was held on Monday, Nener finished 14th and Odakura was 19th. In Tuesday's women's race, Takahashi finished 18th and Kishimoto did not complete the distance.

"I felt the gap between (us and) the rest of the world. I want to raise my level before the Paris Olympics. I experienced disappointment in the individual race so I was determined to put everything out there," said Kishimoto.