A man believed to be a Ugandan athlete who went missing last week from his pre-Olympic training camp in western Japan has been spotted on a surveillance camera at JR Nagoya Station, about 200 kilometers from where he was staying, a police source said Monday.

Julius Ssekitoleko, a weightlifter who was staying in Izumisano, Osaka Prefecture, went missing Friday after leaving a note at his hotel saying he wanted to work in Japan as life in his home country was difficult. The city and his team have been looking for him with help from the police.

He purchased a shinkansen bullet train ticket to Nagoya on Friday morning, Izumisano officials said. He had a mobile phone but his passport was kept by the Ugandan team, which arrived in Japan on June 19, about one month ahead of the opening of the Olympics.

A man resembling Ssekitoleko was captured walking around inside the station on a security camera, said the source, without disclosing on which day. Nagoya is the prefectural capital of Aichi, where about 150 Ugandan people -- the second-largest Ugandan community in Japan -- were living as of late last year, according to government data released Friday.

Ssekitoleko, who is in his 20s, and his coach were due to return to Uganda this week after the athlete missed out on a spot for the Olympics, according to city and team officials.

On Friday, the weightlifter was not at his hotel when an Izumisano official attempted to receive his sample for coronavirus testing at around noon. He was last seen at around 12:30 a.m. that day by a teammate.

The note he left behind also asked members of his delegation to give his belongings to his wife in Uganda, according to the city. 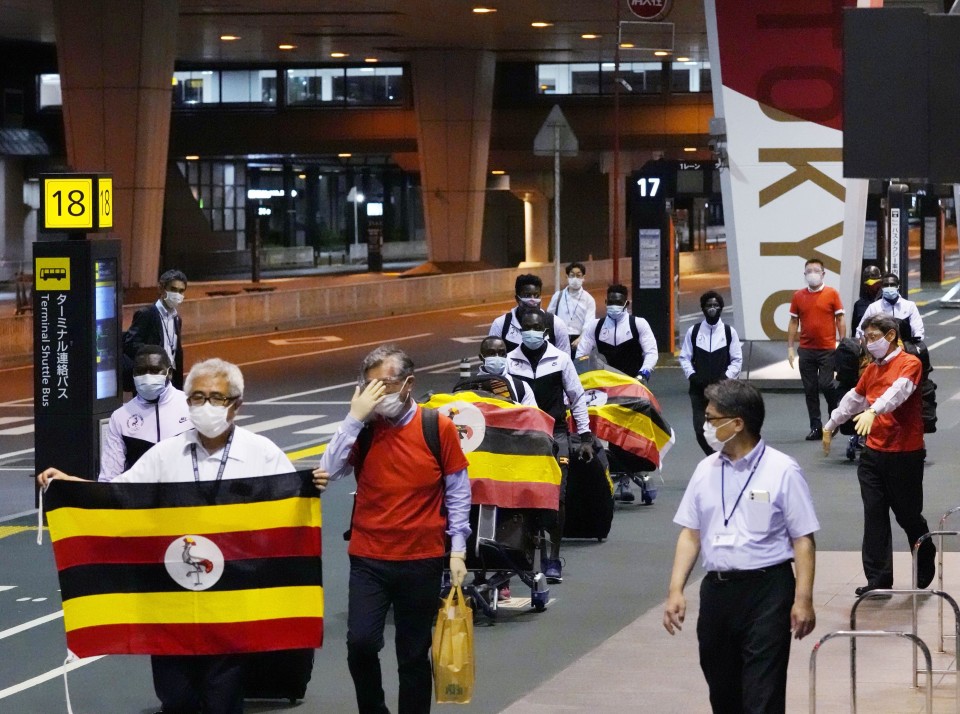 The first group of Ugandan athletes who arrived in Japan for the Tokyo Olympics prepares to leave Narita airport for host city Izumisano, Osaka Prefecture, in the early hours of June 20, 2021. (Kyodo) ==Kyodo

Under the anti-virus measures put in place by the games' organizers, athletes are only allowed to go to a limited number of locations, such as their venues and accommodation, and must avoid contact with the public.

The Ugandan's disappearance from his training camp has raised further questions about the safety of the Olympics, which is to be held amid the coronavirus pandemic, and whether the virus measures will be followed by participants and workers of the games.

Since arriving in Japan, two members of the Ugandan delegation have tested positive for the virus. The first, a man in his 50s, was found to be infected upon arrival at Narita airport near Tokyo.

The remaining eight members traveled to Izumisano, but a second person in their 20s was found to be infected, fueling concerns over Japan's border control measures.

Izumisano has declined to disclose whether Ssekitoleko was the member who had tested positive for the virus, citing privacy reasons. But it has said a COVID-19 test using the weightlifter's sample taken on Thursday came back negative.