Japan's daily total of COVID-19 cases reached 12,342 on Saturday, a record figure for the fourth straight day, triggering concerns about an explosive surge in infections while the Olympics are held in the capital.

The nationwide tally of cases included 4,058 in Tokyo, which had confirmed over 3,000 new cases the past three days each, and record daily infections in 10 prefectures including Kanagawa, Saitama and Chiba near the capital, which logged 1,580, 1,036 and 792 cases, respectively.

The capital saw a total of 44,034 new coronavirus cases in July, topping its previous monthly record of 40,367 infections in January. The number of COVID-19 patients in Tokyo quarantining at home has hit 10,392, topping 10,000 for the first time.

The government of Prime Minister Yoshihide Suga has decided to add the three prefectures near Tokyo as well as Osaka to areas under the current COVID-19 state of emergency, which already covers the capital and Okinawa, from next Monday through Aug. 31.

The capital's seven-day rolling average of cases has risen to a record 2,920 per day, up 117 percent from the previous week.

Although foot traffic in downtown areas has slightly decreased, the surge in infections comes amid the spread of the highly contagious Delta variant of the coronavirus.

Suga on Friday indicated a new goal of having 40 percent of the country's population of 126 million fully vaccinated by late August, and 60 percent receiving at least one shot by then.

The government, which has ramped up COVID-19 vaccination programs following criticism over a sluggish rollout, is aiming to complete inoculating all who wish to get vaccinated by November.

According to the latest available government data, 28.3 percent of the population had been fully vaccinated against COVID-19 as of Friday, with 39.0 percent having received at least one shot. 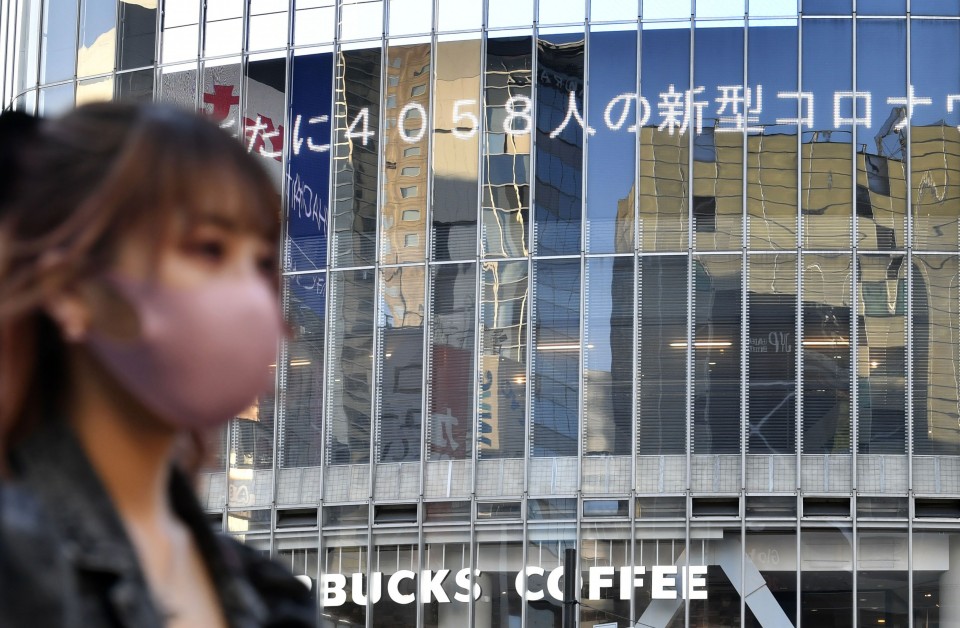 Among those aged 65 or older, 74.5 percent have been fully inoculated, with 86.1 percent having received at least one shot.

Despite Suga's denial of a link between the Olympics and the rapid pace of infections, some experts say a festive mood during the sports event is leading to the public's complacency about COVID-19.

On Saturday, many people gathered near the venues of the Olympics, which have largely been held behind closed doors with no spectators permitted as an anti-virus step, to enjoy the atmosphere of the sporting event.

Yuko Ono, 32, who was among some 100 people taking pictures of a monument of the five Olympics rings located near the National Stadium, said, "Everyone has put up with (restrictions under the virus emergency). I won't go out drinking but I think it's OK to spend some time outdoors."

A 25-year-old woman who came to see an Olympic cauldron set up at Tokyo's waterfront area with a friend, said, "It is nonsense to be told that we should not come see this. (The cauldron) should not have been installed in the first place."

The Tokyo Olympic organizing committee has asked the general public to refrain from visiting the cauldron to curb the spread of the virus.

Around 800 meters away from the cauldron, crowds of people formed around a public road from early Saturday to watch the Olympic debut for triathlon mixed relay at Tokyo's Odaiba Marine Park.

Few people listened to requests from organizers to keep moving, with many letting out cheers in response to athletes waving their hands.

Elsewhere, Osaka Prefecture in western Japan logged 1,040 new cases, with the figure eclipsing the 1,000 mark for the first time since May 8, while Okinawa, the southern island prefecture, reported a record 439 cases.

Anti-virus measures under the country's state of emergency mostly rely on a cooperative public. Japan has not imposed a hard lockdown as some countries have.

A man in his 20s who visited a bar in the area with a friend to see a Tokyo Olympic men's soccer quarterfinal between Japan and New Zealand said, "As the number of COVID-19 cases keeps rising, I'm not surprised anymore. I think the situation will improve somewhat after more young people get fully vaccinated."

The COVID-19 emergency initially declared for Tokyo and Okinawa through Aug. 22 will be extended until the end of the month.