An athlete from Uganda who went missing last week from his pre-Olympic training camp in western Japan has been found and headed back to his home country late Wednesday, officials said.

The mayor of Izumisano, which hosted the training camp, said at a press conference that Julius Ssekitoleko expressed hopes of staying in Japan in the morning but was later convinced to go back to Uganda during a meeting with the head of the delegation.

Confirming a man found in the central prefecture of Mie on Tuesday by police was Ssekitoleko, the Ugandan Embassy in Tokyo has said, "Any issues to do with alleged absconding from the duty he had been flown to perform in Japan and related disappearance from the training camp, will be handled appropriately upon his return."

Ssekitoleko went missing Friday from the country's Olympic team in Izumisano, Osaka Prefecture, after leaving a note at his hotel saying he wanted to work in Japan as life in his home country was difficult, according to Izumisano officials. The city and his team had been trying to locate him with help from police.

The 20-year-old weightlifter and his coach were due to return to Uganda this week after he missed out on securing a spot for the Tokyo Olympics, which will begin Friday amid the ongoing coronavirus pandemic.

Izumisano Mayor Hiroyasu Chiyomatsu told the press on Wednesday that a city official also confirmed at a Tokyo police station that he is the weightlifter and accompanied him and an official from the embassy to Narita airport.

The weightlifter purchased a shinkansen bullet train ticket to Nagoya on Friday morning, according to city officials. He had a mobile phone, but his passport was kept by the Ugandan team, which arrived in Japan on June 19.

The Osaka prefectural police said Tuesday that Ssekitoleko arrived at JR Nagoya Station, about 200 kilometers from Izumisano, on the day of his disappearance and joined a Ugandan man he is believed to have known beforehand, traveling on to the neighboring prefecture of Gifu. 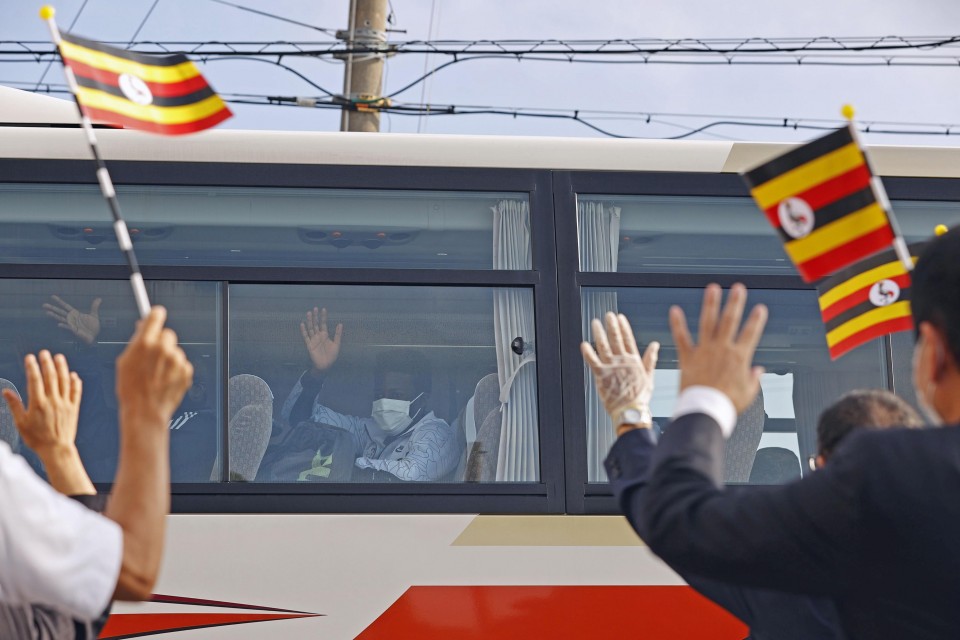 A bus carrying Uganda's Olympic delegation members leaves a hotel they used for pre-Olympic training camp in the Osaka Prefecture city of Izumisano on July 20, 2021, to head to the athletes' village for the Tokyo Olympics in the capital. (Kyodo) ==Kyodo

Ssekitoleko was visiting Yokkaichi about 40 kilometers to the south of Nagoya when he was found by a police officer on Tuesday and taken into protective custody.

He responded to questioning with occasional tears, according to the police.

Under the COVID-19 countermeasures put in place by Olympic organizers, athletes are only allowed to go to a limited number of locations, such as their venues and accommodation, and must avoid contact with the public.

His disappearance ahead of the opening of the Olympics raised further questions about the safety of the global sporting event, as Tokyo and other parts of the country struggle to contain another wave of infections.