Japanese world No. 2 Naomi Osaka made a perfect start to her Olympic career Sunday with a 6-1, 6-4 win over China's Zheng Saisai in the Tokyo Games women's singles tennis competition.

Sporting long braids with red and white elements to match her outfit and the Japan national flag, second-seed Osaka stormed into a 5-0 lead in stamina-sapping heat at Ariake Tennis Park before wrapping up the first set in 32 minutes. 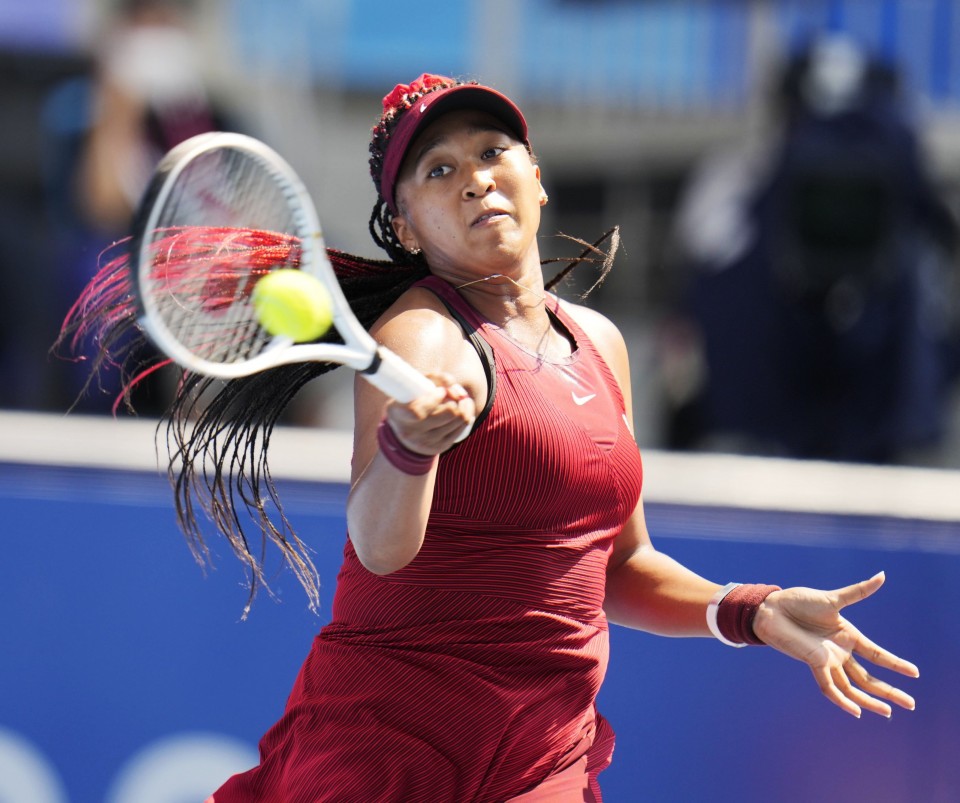 Naomi Osaka of Japan plays against Zheng Saisai of China in the first round of the women's singles tennis event at the Tokyo Olympics on July 25, 2021, at Ariake Tennis Park. (Kyodo) ==Kyodo

Zheng dug deep in the second set but Osaka, playing in her first match since withdrawing from the recent French Open to take a mental health break, was never seriously troubled and the four-time Grand Slam winner clinched victory when Zheng hit a return long.

"I was really nervous. I haven't played since France and she (Zheng) is a really tough opponent (but) thought I did well," said Osaka.

"I think my serve showed up when I wanted it to and I just need to work on a few more pieces. It's really hot but I like it and like to sweat a lot," she said.

Osaka will face world No. 50 Viktorija Golubic of Switzerland in the second round. Golubic beat Colombia's Maria Camila Osorio Serrano 6-4, 6-1.

Australian world No. 1 Ashleigh Barty was a shock first-round loser on Sunday, the top seed bundled out in straight sets by Spaniard Sara Sorribes Tormo. The recent Wimbledon champion's loss opens up the draw for Osaka, improving her shot at a medal.

Osaka's opener against Zheng was originally scheduled to take place on Saturday but the match was pushed back a day. Osaka lit the Olympic cauldron on Friday, taking on the prestigious role in an opening ceremony held without spectators in the 68,000-capacity National Stadium.

Born in Japan to a Haitian father and a Japanese mother and raised in the United States, Osaka's presence at the Tokyo Olympics has provided a much-needed tonic for a games struggling to win public support amid the coronavirus pandemic.

In men's singles action, Kei Nishikori swept aside fifth seed Andrey Rublev of the Russian Olympic Committee 6-3, 6-4, but Yoshihito Nishioka was eliminated at the first hurdle after going down 3-6, 6-1, 6-2 to 12th seeded Russian Karen Khachanov.

"I feel very good, can't complain, I was playing great," said Nishikori. "It's been a while since I played like this and beat a top-10 player, I think it's been two years already."

"I was a little worried if I (was going to) get nervous on the court, but I wasn't, so that's a good sign, especially in the first match. Things get complicated (in the first match), but I'm really happy with how I played today."

Meanwhile, defending Olympic champion Andy Murray has withdrawn from the men's tournament due to a right quad strain, but remains in doubles, according to Tokyo 2020 organizers.