Japanese Prime Minister Yoshihide Suga agreed with the head of the International Olympic Committee on Wednesday to foster global solidarity by holding a successful Tokyo Olympics, despite concerns over a fresh surge of COVID-19 cases in the capital.

Thomas Bach, who is in the country ahead of the games' opening ceremony next week, assured Suga that adequate measures are in place to prevent athletes and staff participating in the Olympics from spreading the coronavirus.

The meeting between the two at the prime minister's office took place as health experts and the public remain nervous about holding the Olympics and Paralympics in one of the world's most populous cities that is currently under its fourth state of emergency. 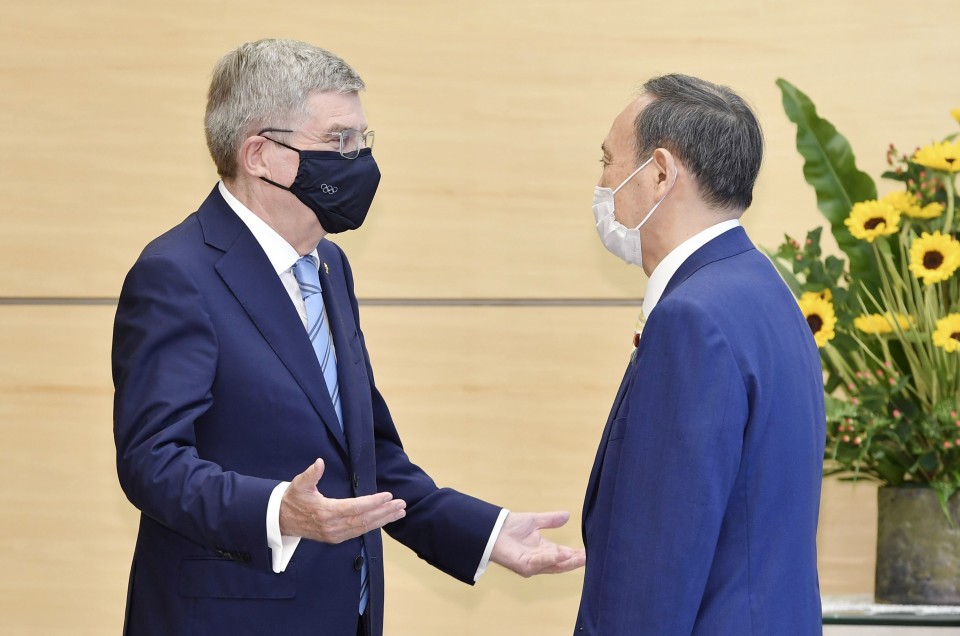 Seeing athletes perform at the highest level at the games will "bring dreams and move children and younger generations who will lead our future," Suga said in the meeting, the beginning of which was open to the press.

"As we are confronting the major challenge of COVID-19 around the world right now, it is all the more important that we send out a strong message that we shall unite and overcome this crisis through our efforts and the wisdom of humankind," he said.

Suga also said he hopes "the IOC will make efforts so that all athletes and stakeholders will fully comply" with restrictions on coming into contact with the Japanese public.

While promising to avoid any risk to people in Japan through strict countermeasures, Bach said "billions of people will follow these games all across the world and they will admire what the Japanese people have achieved under these very difficult circumstances."

The Olympics "will unite the world in all our diversity" and "show that we are stronger together in all our solidarity," he told reporters after the meeting.

The IOC president said he wants to "humbly ask" Japan to "warmly welcome the athletes from all around the world, who have overcome, like the Japanese people, so many challenges."

Public skepticism about the games remains high in Japan, with about 35 percent of respondents in a nationwide poll conducted by Kyodo News last month saying they should be canceled if a state of emergency is declared again in Tokyo and other prefectures.

The capital reported 1,149 new coronavirus cases Wednesday, topping 1,000 in a single day for the first time in two months.

Suga's own COVID-19 adviser, Shigeru Omi, and other infectious disease experts have warned the global sporting event, along with the highly contagious Delta variant of the coronavirus, could cause infections to sharply rise over the coming months.

In their previous meeting in November, the two agreed the games should go ahead this summer, having postponed them by one year due to the pandemic.

Parts of the torch relay have been taken off public roads, and organizers said last week spectators will be banned at almost all venues.

Bach, who arrived in Tokyo last Thursday and spent three days self-isolating at a hotel, held talks with Seiko Hashimoto, head of the Japanese organizing committee, on Tuesday.

Bach will meet with Tokyo Gov. Yuriko Koike on Thursday afternoon, according to the metropolitan government.

On Friday, the 67-year-old German former fencer will travel to Hiroshima to honor victims of the 1945 U.S. atomic bombing, while IOC Vice President John Coates will visit Nagasaki.