Naomi Osaka continued her strong start to the Tokyo Olympics tennis tournament on Monday, winning through her second-round match against Switzerland's Viktorija Golubic in straight sets.

On a noticeably cooler day in the Japanese capital, Osaka put on a determined display, breaking her opponent's serve once in the first set and twice in the second as she rolled past the world No. 49 6-3, 6-2 in the match played on hard court at Ariake Tennis Park. 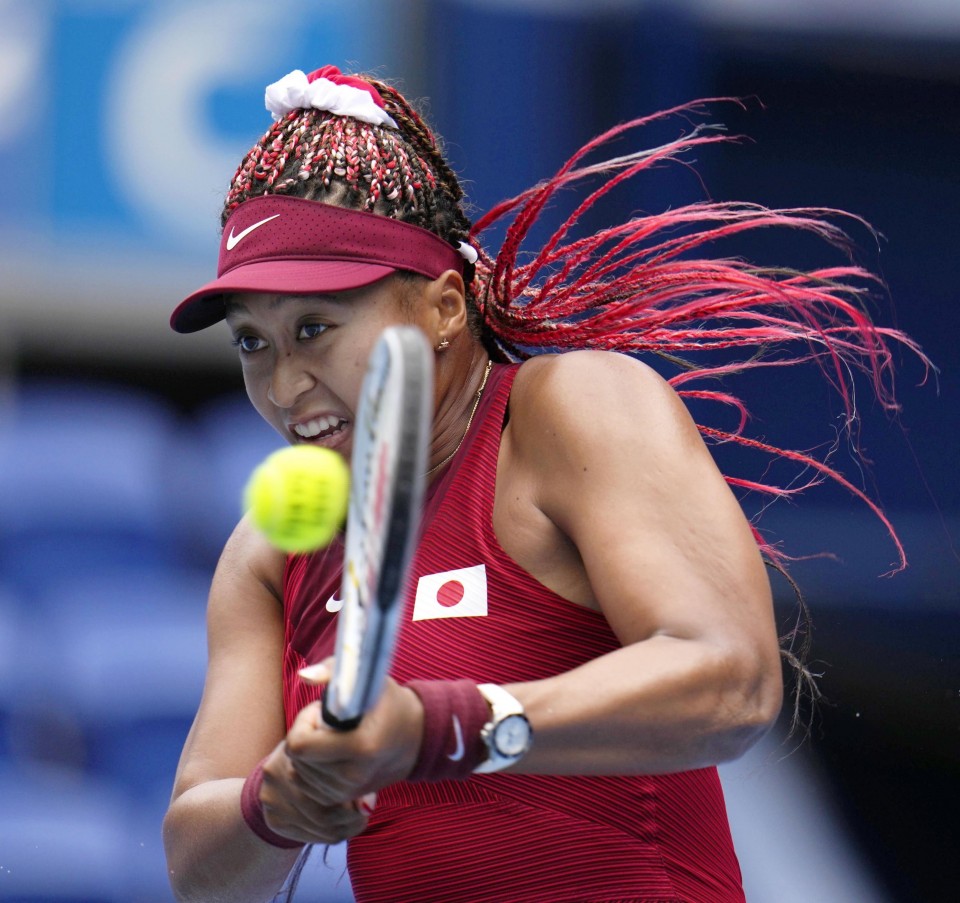 Naomi Osaka of Japan plays against Viktorija Golubic of Switzerland in the second round of the women's singles tennis event at the Tokyo Olympics on July 26, 2021, at Ariake Tennis Park. (Kyodo) ==Kyodo

Osaka, ranked No. 2 in the world, is now the top-ranked player competing in Tokyo after Ashleigh Barty of Australia suffered a shock first-round defeat on Sunday.

But Osaka, who has won all four of her Grand Slams on hard courts, said she is trying to concentrate on each match as it comes, instead of the gold medal.

"I know that I'm playing against the best players in the world and I haven't played in a while, so of course I want to win the gold medal like everyone in the tournament does, but I'm taking it one match at a time," Osaka said.

"Definitely, it would mean a lot for me to win here, but I know it's a process," she said. "All in all, I'm just really happy to be here, and I haven't been in Tokyo" in a while.

Wearing her hair in long bright red braids that match her red outfit and Japan's white-and-red flag, the 23-year-old is playing in her first tournament since she withdrew from the French Open in May due to mental health issues.

Asked how she has maintained her fitness despite her time away from the sport, she said she was motivated to play well especially because she was watching other players compete during her break.

Her third-round opponent will be Czech Marketa Vondrousova after she defeated Romania's Mihaela Buzarnescu 6-1, 6-2 later on Monday.

In her first meeting with Golubic, Osaka controlled the match and kept her focus for the entire 65 minutes, but Golubic, a Wimbledon quarterfinalist earlier in the month, also threatened with her powerful groundstrokes and tactical slices.

Osaka and Golubic both held serve until the Japanese former world No. 1 converted the first break point of the match to go up 5-3 in the first set, hitting a powerful forehand winner that the Swiss had no answer to.

Golubic battled back to deuce on Osaka's serve in the following game, but Osaka closed out the set.

The second set was a more one-sided affair, with Osaka winning the first four games and cruising past Golubic, whose errors piled up as she fatigued.

Born to a Japanese mother and a Haitian father, Osaka decided to represent Japan at the Olympics.

Having lit the Olympic cauldron at the opening ceremony on Friday evening, she has undoubtedly become the face of these games -- the first Summer Games held in Tokyo since 1964.