A week since the opening of the Tokyo Olympics, fraught with many difficulties, the record-high gold medal rush of Japanese athletes has lifted the spirits of a public that remains largely worried about staging the multinational sporting event amid a once-in-a-century pandemic.

Behind the festive mood, however, the number of daily coronavirus cases is rising at an alarming rate in Japan, where only about 28 percent of the eligible population were fully vaccinated as of Thursday, when the host city confirmed 3,865 new infections, hitting a record for the third straight day and the nationwide single-day count topped 10,000 for the first time. 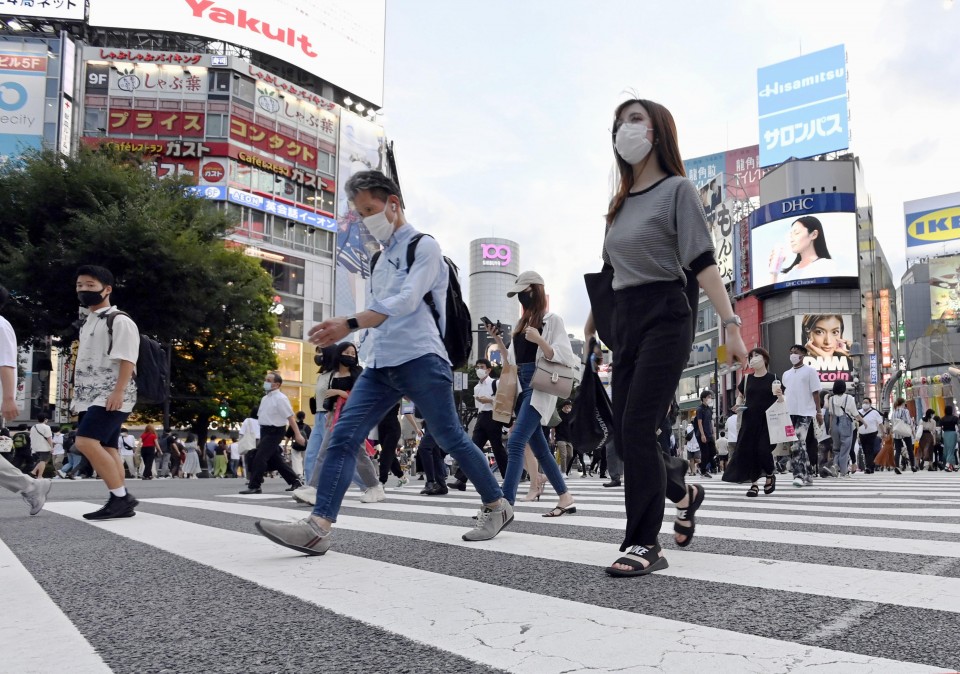 People wearing masks for protection against the coronavirus walk in Tokyo's Shibuya area on July 29, 2021. Tokyo reported a record high 3,865 new COVID-19 cases the same day, while the number of daily cases in Japan exceeded 10,000 for the first time. (Kyodo) ==Kyodo

Medical experts say the COVID-19 state of emergency declared for Tokyo on July 12, asking restaurants not to serve alcohol, has hardly yielded the desired effect in curbing the rising trend, warning that hospitals are already under increased strain.

"There is no doubt that canceling the Olympics is the most effective way in bringing down the number of infections, including its psychological impact," said Kazuhiro Tateda, an infectious disease expert who sits on a government subcommittee on the COVID-19 response.

"But if that can't happen due to an international commitment and trust issues, the government needs to take stronger action before it is too late," said the Toho University professor. 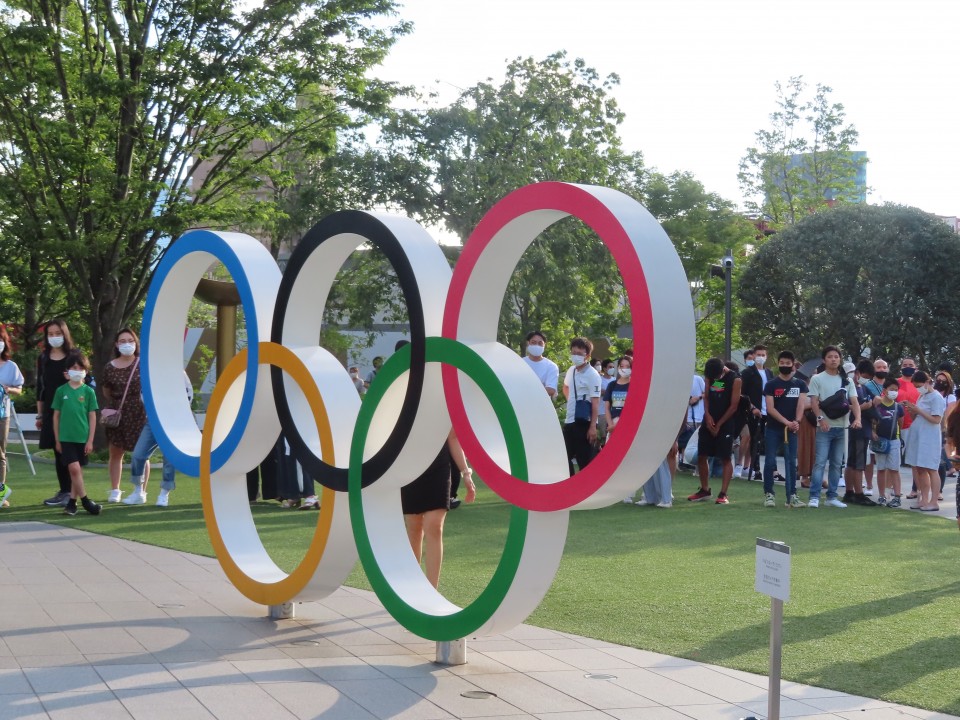 Many people wait in line to take a photograph with a monument of the Olympic rings near the National Stadium in Tokyo on July 27, 2021. (Kyodo)

Although the recent COVID-19 cases were not caused by the beginning of the Olympics, the celebratory atmosphere that followed after they finally began following a one-year postponement, the four-day holiday through July 25 and the arrival of the summer vacation season, could further spread the virus, he said.

The public has been excited by the strong performances of Japanese athletes, who racked up 17 gold medals by Friday, surpassing its previous record of 16 at the last Tokyo Games in 1964 and Athens in 2004.

Golds won by judoka siblings Uta and Hifumi Abe in the women's under 52-kilograms and men's under 66-kg, by swimmer Yui Ohashi in the women's 400-meter and 200-meter individual medleys and by Jun Mizutani and Mima Ito in the inaugural table tennis mixed doubles competition, are a few examples of victories that made headlines across the country. 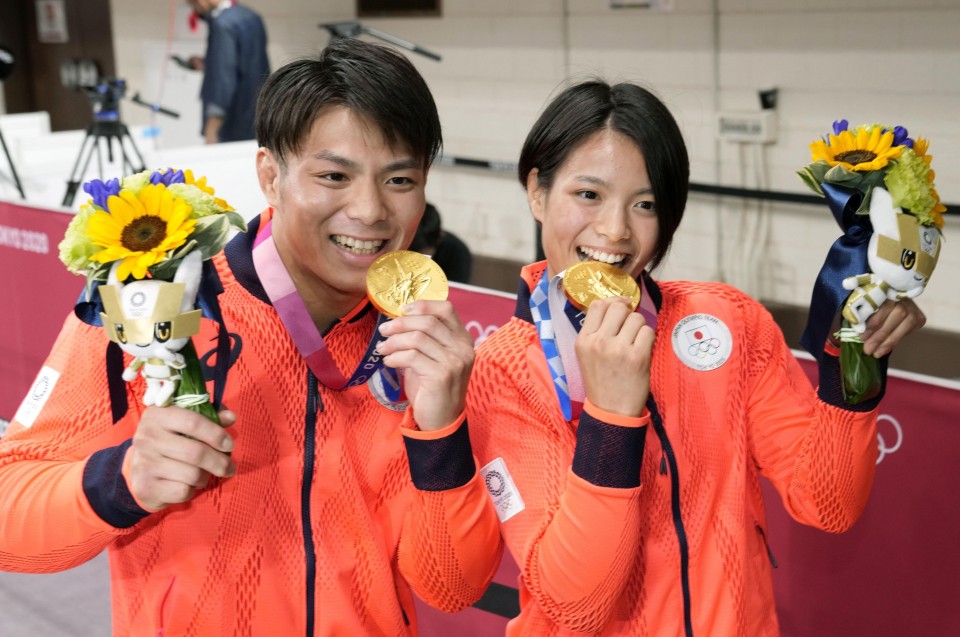 Japanese judoka Hifumi Abe (L) and his younger sister and judoka Uta Abe pose for a photo after winning the men's 66-kilogram and the women's 52-kilogram at the Tokyo Olympics on July 25, 2021, at Nippon Budokan in Tokyo. (Kyodo) ==Kyodo

The successful run and the broad media coverage have helped build Olympic enthusiasm among young and old alike.

"Once the Olympics started, I was moved by how athletes were doing their best. I also noticed how hard the organizers had worked to make these Olympics happen," said Ritsuko Kakeuchi, who lives in Tokyo's Koto Ward, where the highest number of venues is located.

Kakeuchi, who is in her 70s, said she used to think the Olympics should be canceled or postponed because of the pandemic, but now she is glad that the athletes' training did not go to waste.

"By taking basic measures like wearing masks, I think it's possible to prevent infections, so I think the Olympics will be OK."

On a hot afternoon near the National Stadium, the main venue of the games, over 60 people were in line to snap a photo with a monument of the five Olympic rings. Some were wearing Japan uniforms, while others held towels with the Olympic logo.

Among them, a 53-year-old man drove for over an hour to see the stadium even though he is still unsure whether having the Olympics was the right choice.

"I'm not sure if I can be 100 percent happy when an athlete wins a gold medal because I know that there are people who are having a difficult time because of the coronavirus," he said, adding that he is also worried that the Olympics may trigger a surge in COVID-19 cases, especially because he has not yet been vaccinated.

Prime Minister Yoshihide Suga on Friday denied again a link between the ongoing Olympics and surging COVID-19 cases in the capital, citing various measures aimed at preventing infections spreading from athletes and staff visiting for the games to the general public.

Suga has also ruled out the possibility of canceling the Olympics, saying "there is no worry" as people are expected to move around less.

Richard Budgett, medical and scientific director of the International Olympic Committee, rejected the idea that the Olympics have a connection to the recent spike in infections, saying at a press briefing Thursday, "The athletes in the Olympic village really are living in a parallel world."

"As far as I'm aware, there has not been a single instance of an athlete case spreading to the local population, and not a single severe case has occurred among our stakeholders," he said.

Tokyo Gov. Yuriko Koike said earlier this week she and Suga shared the view that the Olympics are being held "very smoothly" owing to various COVID-19 countermeasures.

Such an attitude by the political leaders contrasts with the sense of crisis expressed by those in the medical and health care spheres.

"I suspect the government is not proactively moving to suppress the number of infections because it is afraid it will be criticized if it calls for anti-infection steps during the Olympics," said Haruo Ozaki, head of the Tokyo Medical Association.

Infections among those in their 40s and 50s who have not been vaccinated are rising, while the number of patients needing hospitalization is also increasing. Medical experts say the number of infections will continue to stay high for at least the next two weeks.

He has repeatedly called on the government to "send out a strong message" that helps get across a sense of crisis.

It is too early to see how some 10,000 athletes from over 200 countries and regions, as well as tens of thousands of officials and media workers taking part in the Tokyo Olympics, will impact the coronavirus infection trend in Japan.

Although the positivity rate among Olympic-related people has been very low, concerns remain about security breakdowns in the "bubble" system aimed at keeping them separated from the general public.

The main press center at the Tokyo Big Sight international convention facility has been crowded with journalists and photographers from around the world, with some people not following mask protocols.

Acrylic boards have been placed between seats, but it remains challenging to observe physical distancing.

"There are so many limits when it comes to reporting. We cannot go to the Olympic village, we cannot meet the teams because of the coronavirus," a journalist from Yemen said.

However, she said she is "a bit confused" about the lack of tight restrictions to protect journalists from the virus at the press center or on media transportation buses, which she said have been packed.