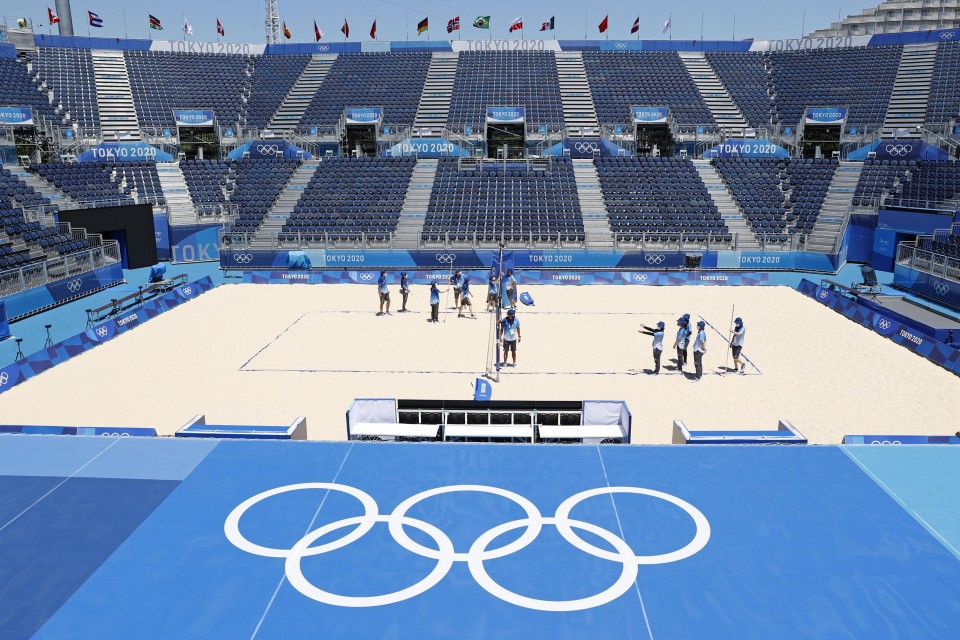 Final preparations are under way for the Tokyo Olympics on July 17, 2021, at Shiokaze Park in the capital, the venue of beach volleyball. (Kyodo) ==Kyodo

TOKYO - The Tokyo metropolitan government reported 1,008 daily coronavirus cases Sunday, topping the 1,000 mark for the fifth straight day and adding to signs that the capital is seeing a fifth wave of the virus before the Olympics start in the city in less than a week.

The figure compares with 1,410 infections confirmed the previous day, the highest single-day spike since Jan. 21.

Suga Cabinet support rate hits low of 35.9% ahead of Olympics

TOKYO - The approval rating for Prime Minister Yoshihide Suga's Cabinet has fallen to 35.9 percent, the lowest level since he took office last year, a Kyodo News poll showed Sunday, adding to signs of public discontent with the government's determination to hold the Tokyo Olympics despite the coronavirus pandemic.

The disapproval rating rose to 49.8 percent, the highest on record for the Suga administration launched in September. With the Summer Games opening next Friday, more than 30 percent still believe the event should be canceled.

Coming into the final day at Dolphins Arena tied with ozeki Terunofuji at a perfect 14-0, the 36-year-old great stamped his authority over his younger rival in a bruising encounter.

WASHINGTON - The U.S. administration of President Joe Biden has proposed to Japan, Australia and India that the first in-person "Quad" meeting of the countries' leaders be held in Washington in late September, according to diplomatic sources.

The face-to-face meeting will follow the first-ever Quad summit that was conducted virtually in March. The gathering would underscore the unity among the four Indo-Pacific democracies amid China's growing assertiveness.

TOKYO - The Tokyo Olympic organizing committee said Sunday it has confirmed coronavirus infections among athletes staying at the Tokyo athletes' village for the first time, a day after saying a nonathlete staying at the facility had tested positive.

The committee said 10 people who have arrived from abroad in connection with the Olympics, including two athletes at the village and another athlete who is not staying there, newly tested positive for COVID-19.

BANGKOK - Thailand will expand a curfew currently in force in 10 provinces to another three amid surging COVID-19 cases, a government announcement in the official Royal Gazette said Sunday.

The government's decision came as Thailand has seen the spread of the highly contagious Delta coronavirus variant, with a record 11,397 new cases as well as 101 deaths reported Sunday.