Hiroki Sakai, Koji Miyoshi and Daizen Maeda also found the net for Hajime Moriyasu's side, who sent the French home from the tournament with a dominant performance at International Stadium Yokohama, claiming top spot in Group A with a maximum nine points. 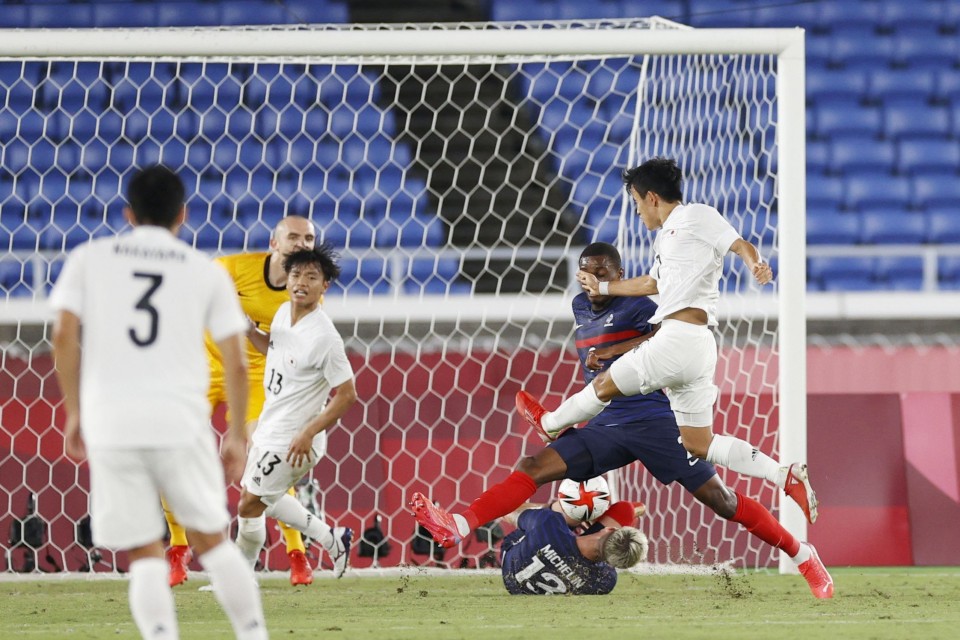 Japan's Takefusa Kubo (R) opens the scoring in a Tokyo Olympic men's football Group A match against France on July 28, 2021, at International Stadium Yokohama near the capital. (Kyodo) ==Kyodo

"The players came in well prepared, and we won the first two games because of their strength and their ability to execute what they've proven capable of doing," Moriyasu said.

"You saw that execution tonight within the context of our team concept."

France finished the match with 10 men after forward Randal Kolo Muani was shown a red card in the 72nd minute, with his side already trailing 3-0.

Twenty-year-old Real Madrid attacker Kubo maintained his streak of scoring in every match of the tournament, striking the opener in the 27th minute. Veteran fullback Sakai, one of Japan's three overage players, doubled the advantage seven minutes later.

Second-half substitute Miyoshi found the net in the 70th minute and Yokohama F Marinos forward Daizen Maeda rounded out the scoring in injury time on the familiar turf of his J-League side's home ground.

Making his first start of the Olympics, Kashima Antlers forward Ayase Ueda had a hand in Japan's first three goals.

He forced diving saves from French goalkeeper Paul Bernardoni that enabled Kubo, and later Sakai, to fire home off the rebound. In the 70th minute, he corralled a ball over the top and teed up Miyoshi to score from the edge of the area.

After coming off the bench in the 80th minute, Maeda added the exclamation goal on a breakaway, stroking home from the left of the area off a cross from Nagoya Grampus winger Yuki Soma.

But after a settling in period, the hosts began to pin the Europeans down with a crisp passing game, with the bulk of the action taking place inside the French half.

Japan will meet Group B runners-up New Zealand in the quarterfinals at Kashima Stadium on Saturday.