A total of 21 members of the South African men's soccer team for the Tokyo Olympics have been identified as close contacts of three other members who tested positive for the coronavirus while staying in the athletes' village, the games organizing committee said Monday.

The number of COVID-19 cases is increasing among athletes participating in the Olympics set to start Friday, with a Czech beach volleyball player becoming the latest athlete to test positive for the virus in the village and an American gymnast in her teens found to be infected during a training camp near Tokyo. 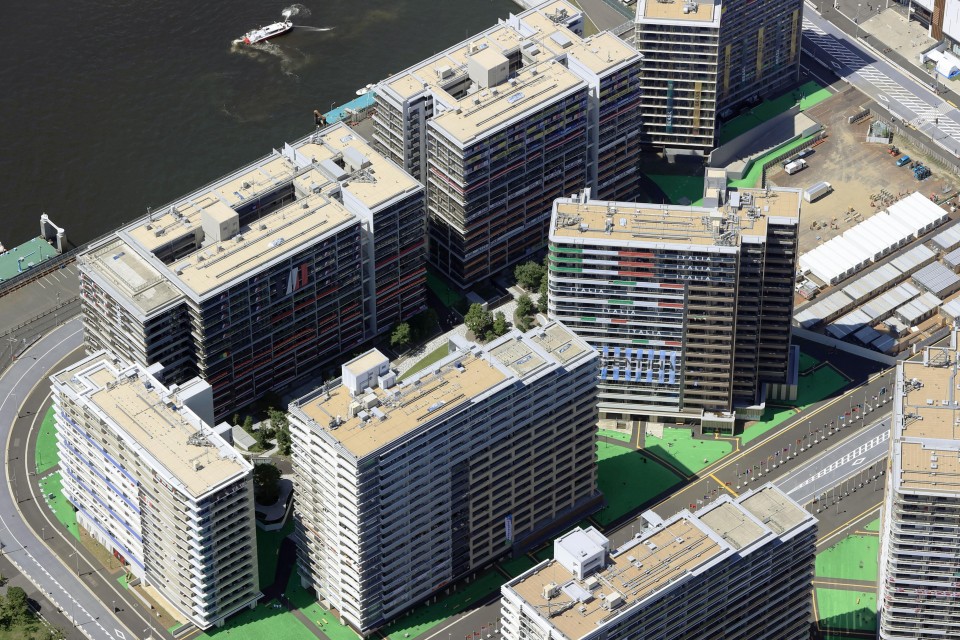 Photo taken from a Kyodo News helicopter shows the athletes' village for the Tokyo Olympics and Paralympics in Tokyo on July 18, 2021. (Kyodo)

Scheduled to face Japan on Thursday on the eve of the opening ceremony, the South Africans identified as close contacts are allowed to take part if they get negative results in their polymerase chain reaction tests conducted within six hours before the match.

Most of the 21 close contacts are players, according to the organizing committee, with spokesperson Masanori Takaya saying that "adjustments will be made with bodies including FIFA" regarding the staging of the match.

FIFA demands at least 13 players from each side for a match to go ahead.

According to the Olympic playbook that sets out coronavirus safety rules, close contacts may only compete after returning negative daily PCR tests, undergoing health examination by experts and getting approval from the sport's international federation.

The organizers and the Japanese government have insisted that it is possible to hold the Olympics safely despite the coronavirus pandemic by implementing strict anti-virus measures.

Brian McCloskey, a health expert advising the International Olympic Committee, said at a press conference on Monday that the athletes' village is safe because people staying there are being tested for the virus on a regular basis.

He also said the 58 COVID-19 cases confirmed among people related to the Olympics in July, announced by the organizing committee, were something he had expected and perhaps lower than projected.

He said he believes the games will not contribute to spreading the virus in Japan, while adding it is impossible to predict what the infection situation will be after the games close on Aug. 8.

The South African Rugby Union, meanwhile, said the country's men's rugby sevens coach Neil Powell will take charge of his team remotely from the southwestern city of Kagoshima during their July 26-28 Olympic campaign having tested positive for the virus on Saturday.

Officials of Kagoshima city, where the team is on a weeklong training camp, said Sunday they had confirmed negative test results for the other 19 players and staff in the South African squad who took bronze at the 2016 Rio de Janeiro Games.

U.S. female gymnast tests positive for COVID ahead of Olympics