Japanese judoka Chizuru Arai triumphed over Michaela Polleres of Austria in the final to win the gold medal in the women's under 70 kilogram class at the Tokyo Olympics on Wednesday.

With her victory, Arai claimed the Japanese women's second judo gold medal of these games following Uta Abe at 52 kg -- the first time the women have won two weight divisions in judo since they achieved the feat at the 2008 Beijing Games. It was Japan's second consecutive Olympic title in the women's 70 kg. 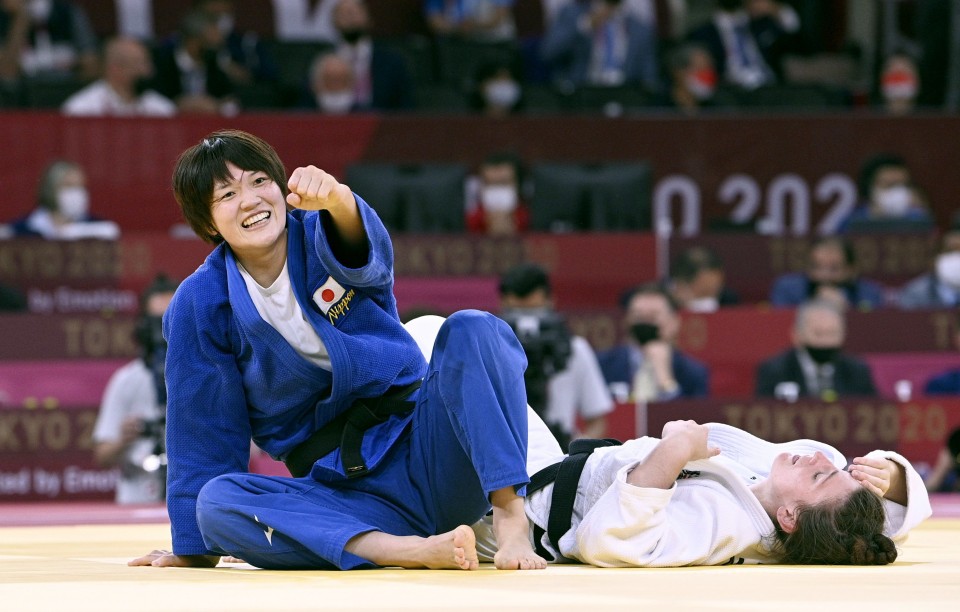 Chizuru Arai (blue) of Japan reacts after winning the women's judo 70-kilogram final against Michaela Polleres of Austria at the Tokyo Olympics on July 28, 2021, at Nippon Budokan in Tokyo. (Kyodo) ==Kyodo

In the final, Arai, 27, who was making her Olympic debut, was in the driver's seat from the start to finish, laying the pressure on Polleres before scoring a well-timed waza-ari using an outer leg trip en route to a win in regulation.

Haruka Tachimoto also took the top Olympic podium spot at 70 kg in Rio five years ago, which ended up being the only gold medal claimed by the Japanese women in the 2016 judo tournament. 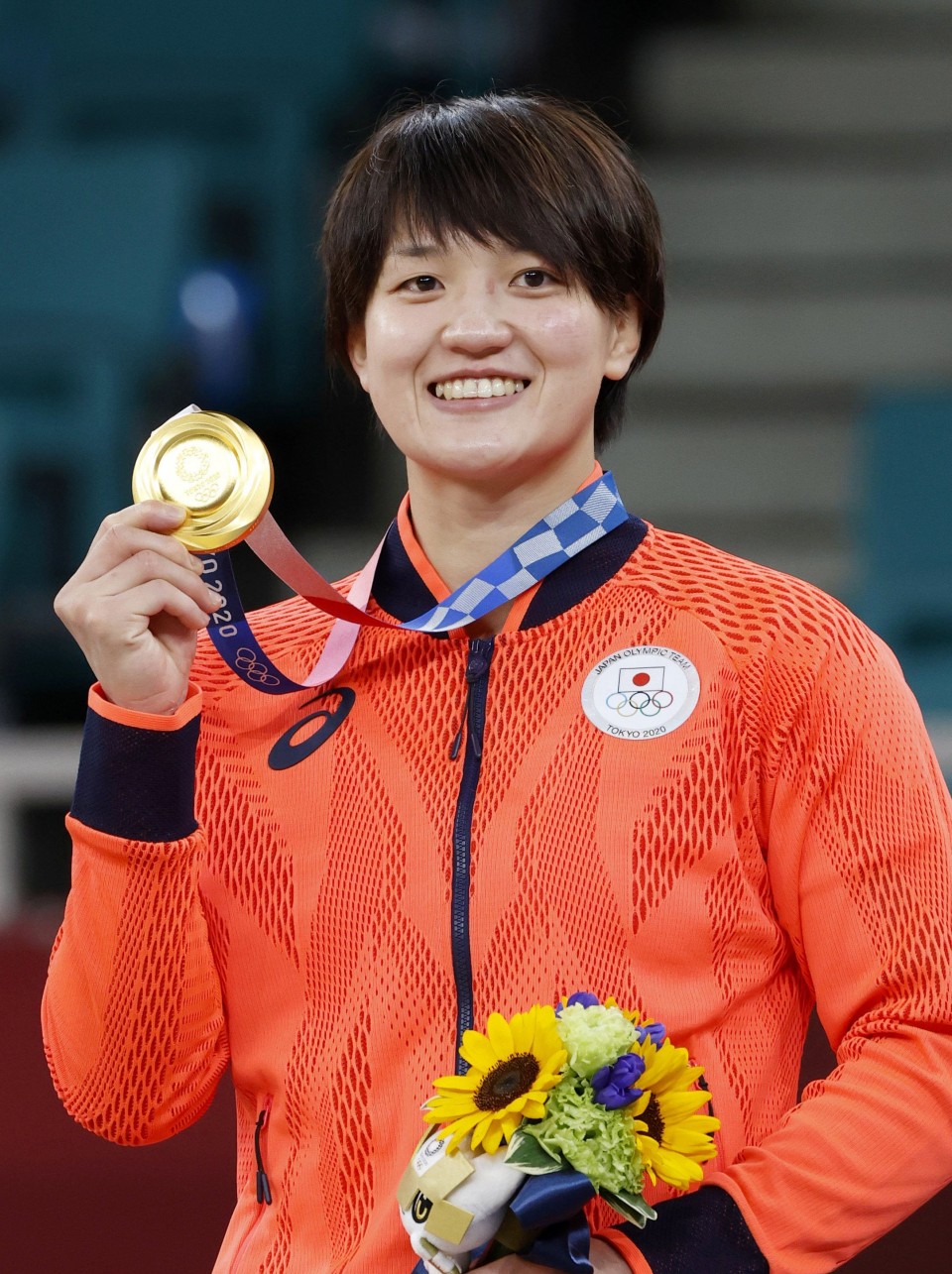 Chizuru Arai of Japan poses with her judo 70-kilogram gold medal at the Tokyo Olympics on July 28, 2021, at Nippon Budokan in Tokyo. (Kyodo) ==Kyodo

"I didn't want to end with any regrets, so I wanted an ippon and stayed on the offensive," Arai said, when asked about her continuous attack in the final.

Arai had narrowly missed an Olympic berth vying against Tachimoto at the previous games but -- reinvigorating her campaign after disappointment -- she captured back-to-back titles at the 2017 and 2018 world championships.

She had been bidding for her third consecutive world title in 2019 at the Nippon Budokan, the same "sacred ground" being used as the venue for the Tokyo Games, but was eliminated in the third round.

On Wednesday, Arai arguably had her toughest match in the semifinals against Russian Madina Taimazova, the bout lasting an energy-sapping 16 minutes, 41 seconds. Double world champion Arai tried in vain, uncorking several ineffectual uchimata throws, but it was her relentless mat work that finally ruled the day.

Taimazova, the 2021 European bronze medalist competing under a neutral flag, escaped her opponent's submission holds time and again until Arai was able to place her in an ironclad chokehold to end it, the Russian requiring medical assistance to exit the mats. Taimazova, who had swelling over her right eye from an earlier bout, eventually won a bronze, along with Dutchwoman Sanne van Dijke. 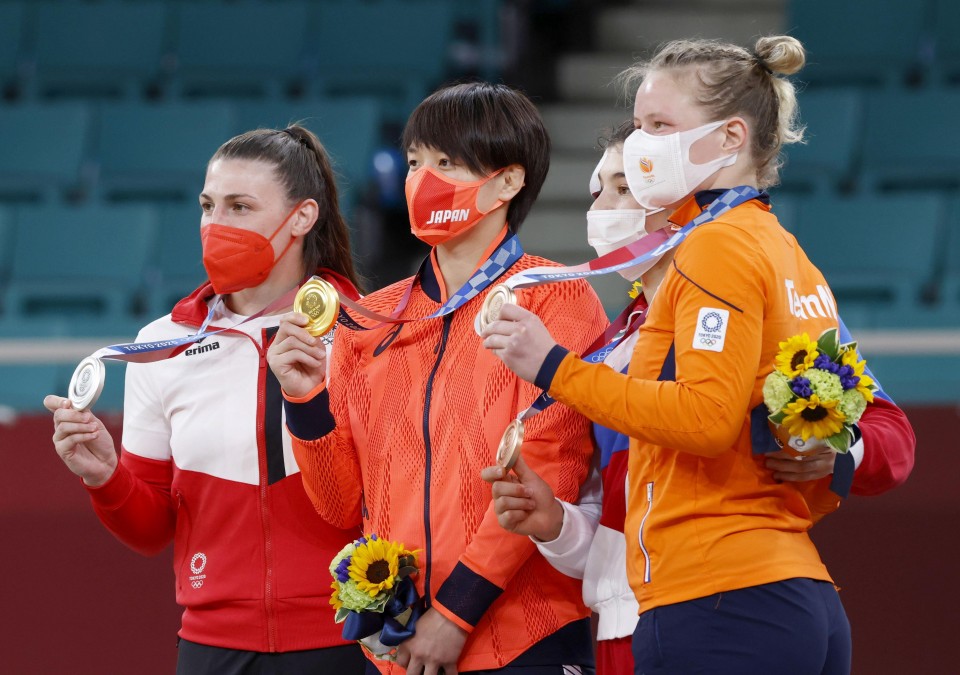 Chizuru Arai (2nd from L) of Japan poses with her judo 70-kilogram gold medal at the Tokyo Olympics at Nippon Budokan in Tokyo on July 28, 2021, alongside silver medalist Michaela Polleres of Austria (L) and bronze medalists Madina Taimazova of the Russian Olympic Committee (2nd from R) and Sanne van Dijke of the Netherlands. (Kyodo) ==Kyodo

It had been over five long years since Arai failed to qualify for Rio.

"I went through each year believing that I would be No. 1, so the last thing I wanted to do was leave here with any regrets," Arai said.

"I wanted to give up so many times, but I'm really happy I never stopped believing in myself and it led to this result."

In the quarterfinals, Arai dropped Germany's Giovanna Scoccimarro to the mat with a body slam for waza-ari before placing her opponent in a vertical submission hold for ippon.

In the men's 90 kg final, reigning European champion and world No. 1 Lasha Bekauri of Georgia scored a waza-ari against Germany's Eduard Trippel, the world No. 2, deploying a sleeve-pulling hip throw for waza-ari to capture his first Olympic title.

Japan's men, meanwhile, saw their stellar streak in Tokyo of four straight judo titles from opening day snapped when Shoichiro Mukai fell in his second bout of the day to Toth, who toppled the 2019 world silver medalist with an inner leg throw in the golden score. 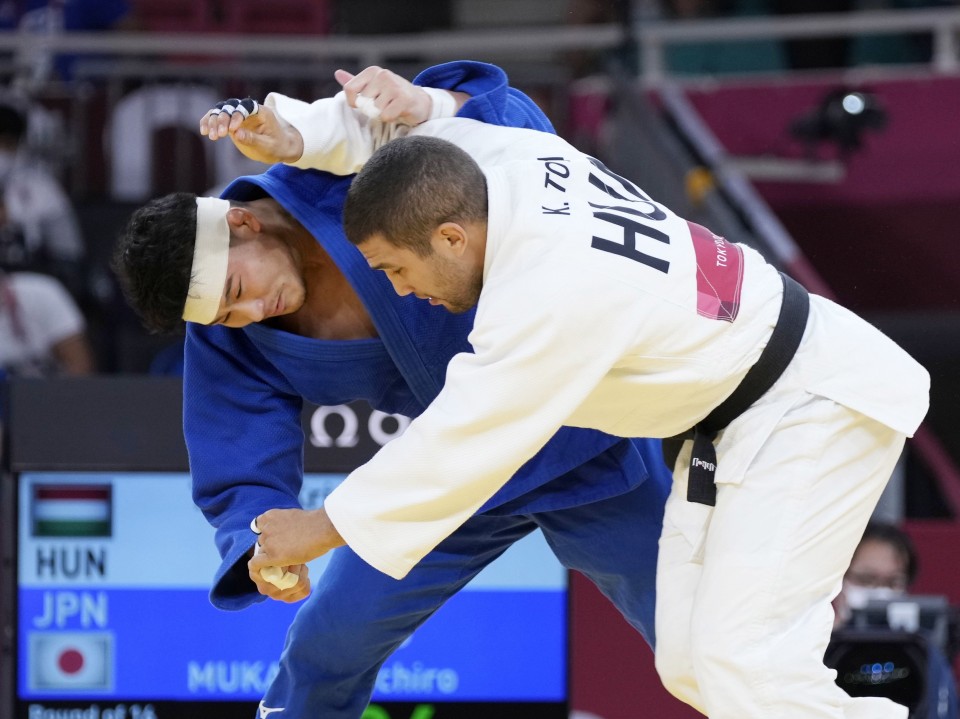 Krisztian Toth of Hungary (white) competes against Japan's Shoichiro Mukai in the third round of the men's judo 90-kilogram at the Tokyo Olympics on July 28, 2021, at Nippon Budokan in Tokyo. (Kyodo) ==Kyodo