The head of the International Olympic Committee said Tuesday canceling the Tokyo Olympics was not an option, despite the coronavirus pandemic, and going ahead with the games this summer was decided in the interest of athletes preparing for the games for many years.

While Tokyo has been under a state of emergency again due to surging infections, Thomas Bach told Kyodo News in an online interview that he will "not speculate" on what could happen if the COVID-19 situation drastically worsens during the Olympics, which will run from July 23 to Aug. 8. 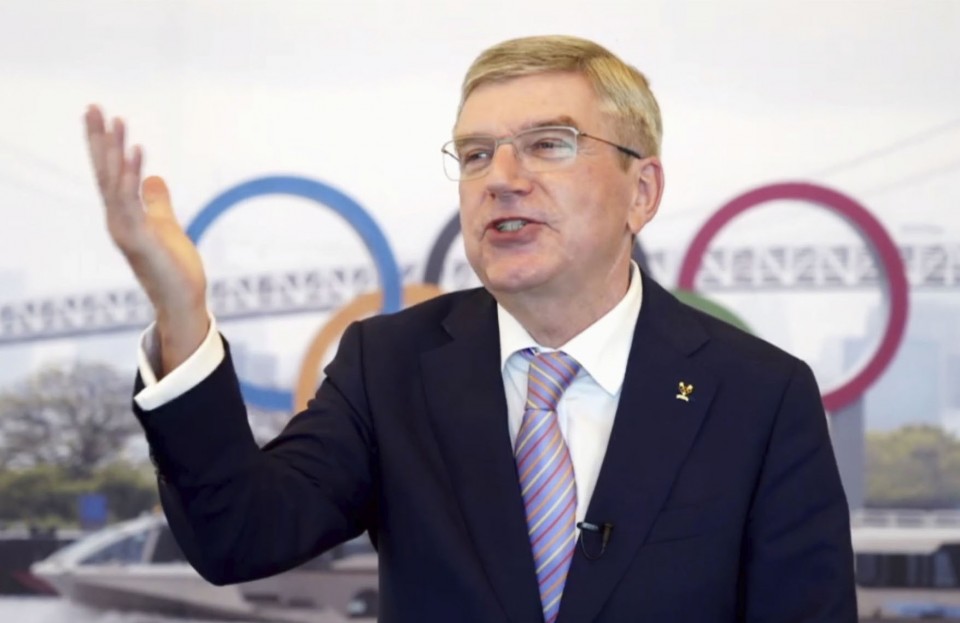 "We, the IOC, will never abandon the athletes, and with the cancellation, we would have lost a whole generation of athletes. So therefore, a cancellation for us was not really an option," Bach said when referring to the decision in March last year to push back the games due to the global health crisis.

Bach said calling off the Olympics and receiving money from its insurance was the "easiest way" at the time, but the IOC did not choose that path and invested more to make the games happen.

Without disclosing specifics, the IOC president, who arrived in Tokyo on Thursday, said the opening ceremony at the National Stadium will be "very emotional" because it will be the first time since the pandemic that "you will see the whole world in one place."

He said it will send a "strong message of unity and of solidarity during these difficult times from Japan to the entire world."

The 67-year-old also said he has supported the decision last week to bar spectators from almost all Olympic venues with a "heavy heart" as "the foremost principle is the safety and security for everybody" and his organization's principle was to endorse what the "Japanese authorities deem appropriate."

Stressing that "rigid anti-COVID measures," such as regular COVID-19 testing, have been put in place and athletes from overseas will be separated from the Japanese public, he said people in Japan do not have to be afraid of the possibility of the Olympics endangering their health.

"They can have confidence in all these measures," he said.

However, public support for the Olympics remains low in the country, where many people are worried that the games could trigger a further surge in infections driven by the more contagious Delta variant.

"They are unfortunately accustomed to have competitions without spectators. Nevertheless, you could see during this year outstanding performances in many sports," he said, adding they have become Olympians as they have been able to "address different circumstances."

Still, he said organizers will help Olympians in many respects to motivate them even more, revealing that one of them will be a "very innovative, immersive audio system" in a stadium that will play the sound of past Olympics.

Asked when excitement will build up in the host country, Bach said, "When the Olympic flame will shine brightly over Tokyo."

"It's normal and we know this from previous Olympic Games," he said. "Then the sport starts and the athletes shine on the Olympic stage."

He said he is planning to visit the cities of Sapporo and Fukushima, where some Olympic venues are located, during his time in Japan, in addition to visiting Hiroshima, which was devastated by a U.S.-dropped atomic bomb in World War II, on Friday to show the IOC's commitment to peace.

Bach is set to visit Sapporo, the capital of the northernmost main island of Hokkaido, on Aug. 7 when the women's marathon will be held, while he emphasized the importance of making a trip to Fukushima in the northeast, where softball games are slated for both July 21-22, ahead of the official opening of the Olympics.

The Tokyo Games have been dubbed the "Reconstruction Olympics" by the Japanese organizers in an effort to showcase the recovery of the northeastern region that was hit by a massive earthquake, tsunami and nuclear disaster 10 years ago.

"For us, like for the Japanese people, it is a very important message that there are Olympic events happening in Fukushima and demonstrating the regeneration of the city and the region," he said.