Japan clinched a berth in the Tokyo Olympic women's football quarterfinals Tuesday after substitute Mina Tanaka struck late to give the host nation a 1-0 win over Chile.

Head coach Asako Takakura's side laid siege to the opposing area for much of the contest at Miyagi Stadium, but they could not find a way through the Chilean defense until the 77th minute, when Tanaka fired home with an assist from Mana Iwabuchi. 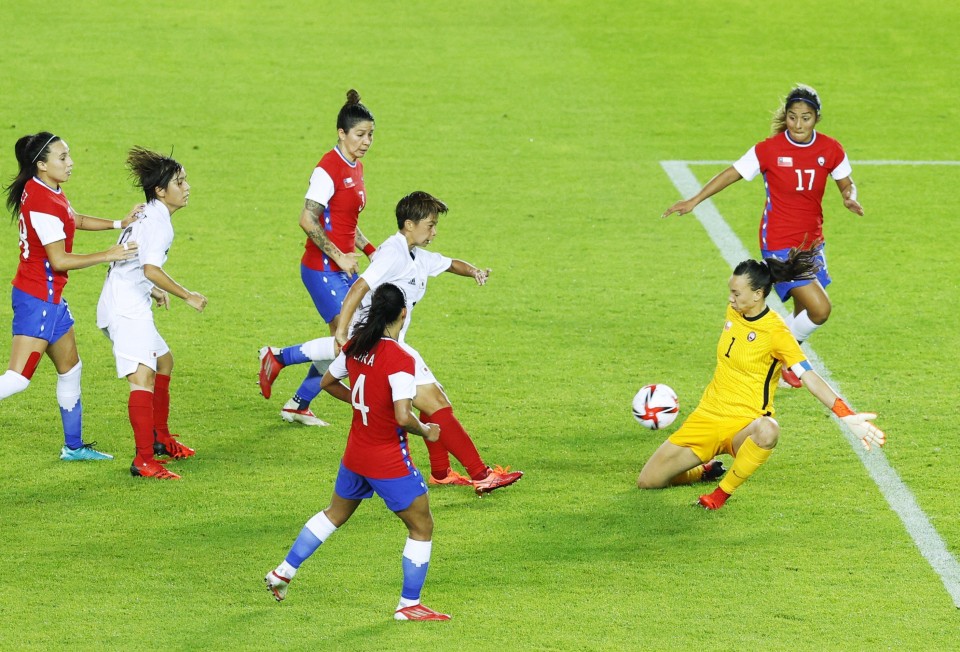 With her back to the goal, star forward Iwabuchi received a sharp through ball from midfielder Hina Sugita, laying off for Tanaka to strike from the middle of the area.

The result sees Nadeshiko Japan finish the group stage third in Group E behind Britain and Canada, advancing to the quarters as one of the two best third-place sides with a win, a loss and a draw.

"There were many positive aspects to today's win, but the quarterfinals are a different battle. It's a single knockout match, so we need to study our opponents and get ourselves prepared," Takakura said.

The hosts will meet Group G winners Sweden in a daunting quarterfinal matchup. The Swedes swept through the group stage with three straight wins, starting with a 3-0 trouncing of pre-tournament favorites the United States.

"I think (Sweden) have a lot of momentum right now," defender Risa Shimizu said. "(But) I think as long as we can keep hold of the ball and control possession, we will be fine."

Following an opening draw with Canada and a loss to Britain, Japan came into their final group match desperate for a win to keep alive their hopes of reaching the knockout stage.

Showing their attacking intent from the outset, Japan put the Chilean defense under pressure in the 10th minute when Shimizu almost found Yuika Sugasawa directly in front of goal with a ball from the right.

An Iwabuchi through ball sent Sugita clear into the box, where her shot was stopped by Chilean keeper Christiane Endler.

Japan kept Chile pinned inside their own half late in the term, with Narumi Miura blazing a long-range effort over the bar before Yui Hasegawa fired just wide of the mark from outside the box.

Hasegawa found Iwabuchi with a ball over the top close to halftime, but the Arsenal striker miscued her shot from the left of the area.

After entering to start the second half, Tanaka forced a save from Endler early in the term as Nadeshiko Japan kept up the pressure.

Having dominated possession and shots on goal, Japan had a lucky escape when Chile midfielder Francisca Lara stuck the bar with a shot that ricocheted down onto, but not over, the goal line, according to the match officials.

The hosts let a chance go begging late when Iwabuchi passed up a shot from the right and played square to Tanaka, giving the Chilean defense time to scramble back and make a desperate clearance.

But with 13 minutes left in regulation, the two Japanese attackers combined brilliantly to make the decisive breakthrough.