Japan's immigration agency signed an agreement on Wednesday with the U.N. refugee agency to improve the transparency of refugee recognition procedures.

The deal between the Immigration Services Agency of Japan and the Office of the U.N. High Commissioner for Refugees comes in response to Japan's notoriously low refugee recognition rate and amid criticism over the alleged improper treatment of a Sri Lankan woman who died while being held at an immigration facility months ago. 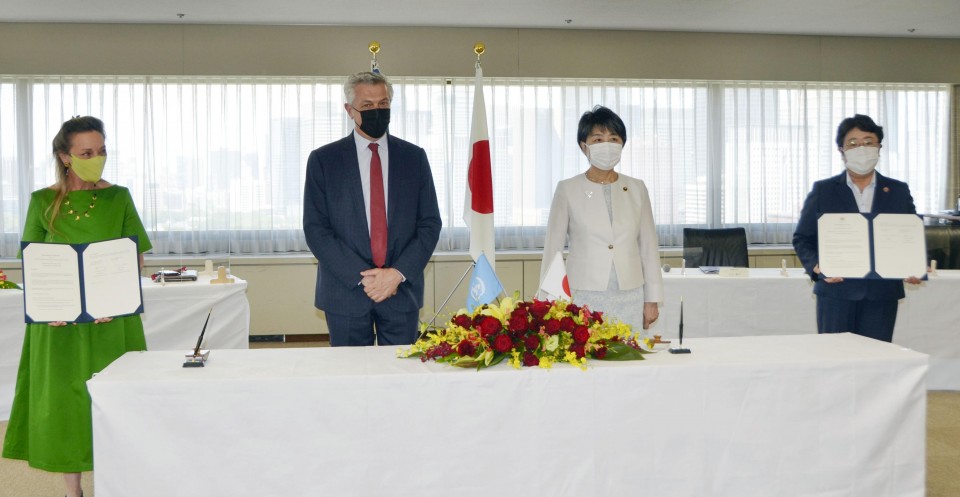 In a bid for a better refugee recognition process, the agency is currently working on clarifying the grounds for granting refugee status to asylum seekers, as it listens to opinions from the UNHCR and beefs up its cooperation with the U.N. agency.

According to Japan's immigration agency, 3,936 applications for refugee status were processed in 2020, of which 47, or roughly 1 percent, were approved.

With "interest in Japan's refugee system increasing recently," Justice Minister Yoko Kamikawa said at the signing ceremony for the memorandum of cooperation that further cooperation between the agency and the U.N. body will be "beneficial" to implement the system properly.

U.N. High Commissioner for Refugees Filippo Grandi said the agreement is significant as it will improve and expedite the recognition process for people who apply for refugee status in Japan.