The administration of Prime Minister Yoshihide Suga faced a growing backlash Tuesday for a controversial plan, retracted after a day, to have financial institutions help enforce a ban on eateries serving alcohol in Tokyo to curb the spread of COVID-19.

Both ruling and opposition parties criticized the proposal, viewed as an implicit threat to withhold loans from restaurants and bars already hit hard by the pandemic.

Yasutoshi Nishimura, the minister in charge of the coronavirus response, apologized at a press conference for "causing confusion and anxiety" by suggesting the move last Thursday. 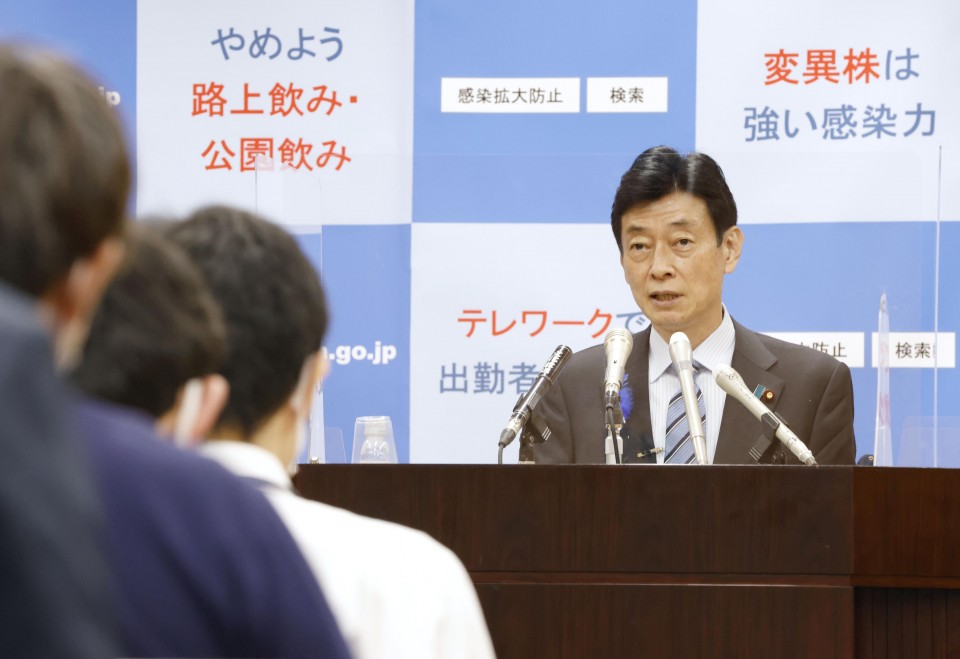 Japanese economic revitalization minister Yasutoshi Nishimura, who is in charge of Japan's coronavirus response, attends a press conference in Tokyo on July 13, 2021, over the government's anti-virus measures to be taken during the current state of emergency. (Kyodo) ==Kyodo

"I failed to fully get across the point, so I feel sorry," he added, while denying he would resign as a minister over the matter.

The government said it had also abandoned a plan to ask beverage wholesalers to stop selling alcohol to eateries during the state of emergency, also in place in Okinawa.

Nishimura said an official from the Cabinet Secretariat had briefed Suga and other members of his Cabinet on the plan to call on financial institutions to help enforce the alcohol ban.

It appeared to contradict Suga's assertion Friday that he "had no knowledge" of Nishimura's statements the previous day.

The government's top spokesman, Chief Cabinet Secretary Katsunobu Kato, told a separate press conference the meeting with Cabinet members in question was on Wednesday, but there had been no discussion of specific measures.

The government said Tuesday it had also abandoned a plan to ask beverage wholesalers to stop selling alcohol to eateries during the state of emergency, also in place in Okinawa, a senior administration official said.

Under the COVID-19 state of emergency covering Tokyo from Monday through Aug. 22, restaurants and bars are prohibited from serving alcohol and are required to close by 8 p.m.

The plan regarding financial institutions sparked an outcry among eateries, some of which have defied the restrictions amid the government's slow payout of "cooperation money" for businesses that comply.

The No. 2 figure in Japan's ruling Liberal Democratic Party, Secretary General Toshihiro Nikai, on Tuesday expressed his chagrin at Nishimura's suggestion of the move, ahead of a general election later this year.

"I'd like him to give us an explanation beforehand in order to avoid any misunderstanding, and to be careful in putting out his message," Nikai was quoted by a senior LDP official as saying at a party meeting.

Meanwhile, Yukio Edano, leader of the main opposition Constitutional Democratic Party of Japan, said "the problem is with the entire administration, not just Nishimura." The opposition is expected to further press the matter in parliamentary hearings later this week.

Nishimura vowed to stay on as minister, saying he will "live up to the responsibility of curbing the spread of the virus and creating an environment in which businesses can be maintained."

Last Thursday, he said the government would share with financial institutions information about their clients running restaurants and bars that were not following the alcohol ban, and wanted such institutions to request compliance with anti-virus measures.

The Cabinet Secretariat the same day sent the finance and industry ministries a document asking them to seek the cooperation of lenders including state-backed ones under their jurisdictions, indicating the government had already been moving to put the plan into action.

Other Cabinet members claimed they had been opposed to the proposal from the beginning, with Finance Minister Taro Aso saying he told his aide to ignore the directive.

The government has been encouraging financial institutions to provide more loans to eateries, but the policy "was about stopping making loans, which did not make sense," he said.

Economy, Trade and Industry Minister Hiroshi Kajiyama said he "strongly felt there was something wrong" with making such a request to financial institutions and instructed ministry officials to find out what the purpose was, adding he did not give approval to go along with the plan.