Having scaled the heights of women's soccer for club and country, Nadeshiko Japan captain Saki Kumagai is seeking to add an elusive Olympic gold medal to her resume at the Tokyo Games.

The veteran of Japan's 2011 World Cup-winning team will lead the world No. 10 side onto the pitch in her hometown of Sapporo on Wednesday, two days before the opening ceremony, to kick off their Olympic campaign against eighth-ranked Canada.

Kumagai and her teammates have made no secret of their ambitions, but if they are to improve on Japan's best-ever result of silver at the 2012 London Games, they must first conquer a challenging Group E that also includes Great Britain and Chile. 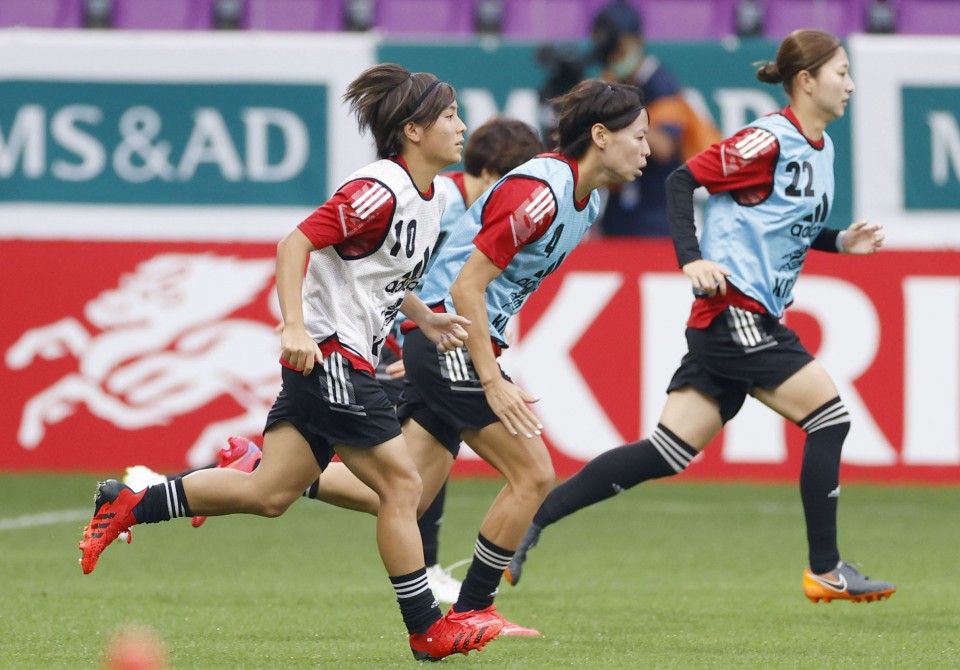 (From L) Mana Iwabuchi, Saki Kumagai and Yuzuho Shiokoshi of Japan's Olympic women's football team are pictured during training on July 13, 2021, at Sanga Stadium in Kyoto, where the team takes on Australia the next day in a warm-up match for the Tokyo Olympics. (Kyodo) ==Kyodo

While most of the Olympics will take place behind closed doors, the 30-year-old Kumagai looks forward to playing in front of a bigger Japanese TV audience, including more young women and girls, thanks to convenient kickoff times.

"The Olympics are especially significant as an opportunity to promote women's soccer," the Bayern Munich defender told Kyodo News in an interview late last year.

"There was tremendous interest from Japan in the 2012 London Olympics. If the games are held in Tokyo, many people will be able to watch in real time."

Kumagai's place among the sport's elite was underlined last November when she was shortlisted for FIFA's best women's player of the year.

She became the first Asian player to score in a UEFA Women's Champions League final last August when she helped French side Lyon earn their fifth straight continental title and seventh overall with a 3-1 win over Germany's Wolfsburg.

After parting ways with Lyon, she made the move to German powerhouse Bayern on a two-year deal in May.

With their Olympic preparations disrupted by the coronavirus pandemic, Nadeshiko Japan were eventually able to warm up with a series of friendlies on home soil this year.

In four straight wins against Paraguay, Panama, Ukraine and Mexico, they scored 27 goals while conceding just one. After their 8-0 demolition of Ukraine in early June, Kumagai warned her team against complacency.

"Even though we were able to score a lot of goals, our approach can still be much sharper, and if it isn't, we aren't going to win in the Olympic tournament," she said.

While the path to a gold medal is likely to run through a United States side that has won four of the six previous women's Olympic tournaments, Japan's immediate focus is on starting with a win against Canada at Sapporo Dome.