Sluggers Shohei Ohtani and Juan Soto put on a show during their first-round battle in the All-Star Home Run Derby on Monday, but it was the Dominican who pulled off a massive upset by beating the Los Angeles Angels' Japanese star.

With the final tally 31 home runs to 28, Ohtani, who became the first Japanese player to participate in a Home Run Derby the night before Major League Baseball's annual Midsummer Classic, fell to the Washington Nationals star after a tiebreaker swing-off. 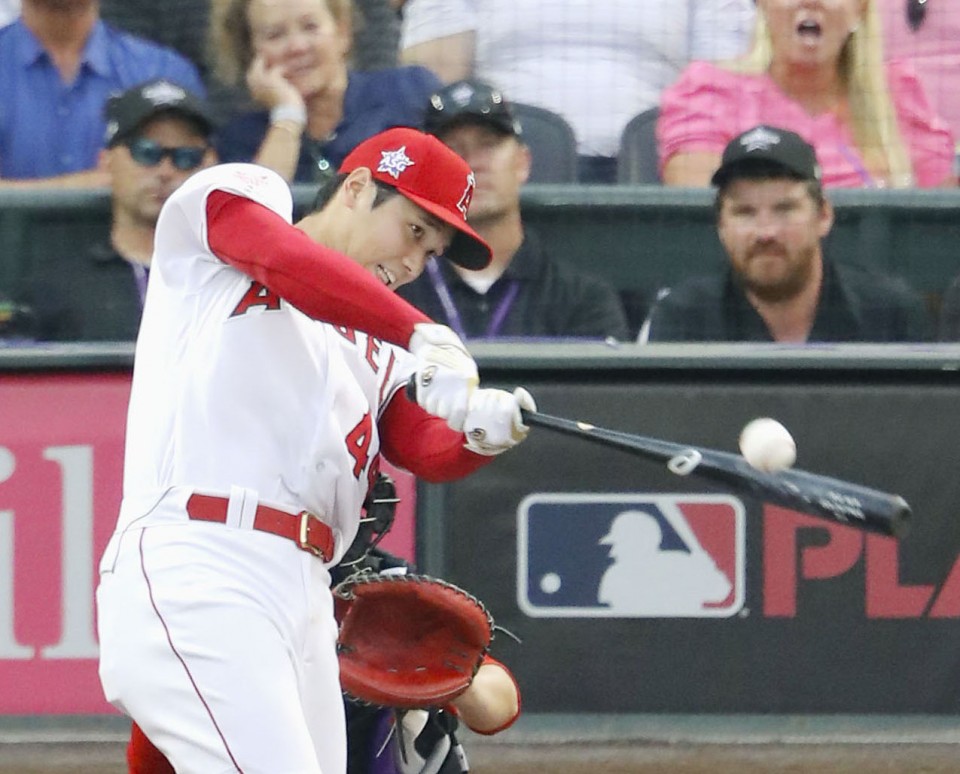 Shohei Ohtani of the Los Angeles Angels competes in the first round of the MLB All-Star Home Run Derby on July 12, 2021, at Coors Field in Denver, Colorado. (Kyodo) ==Kyodo

In the initial round, Ohtani and Soto both hit 22 balls over the fence. Then, in a one-minute tiebreaker, they both hit six more. In the swing-off, Soto converted all three swings into home runs, a feat Ohtani could not match.

"I'm exhausted. I wish we didn't need a tiebreaker," said Ohtani, who is in his fourth major league season with the Angels.

"I've never swung a bat that many times in a single day (during a game). I struggled early but later on I found the right swing. The whole day was fun. It's not an experience that everyone gets," he said. 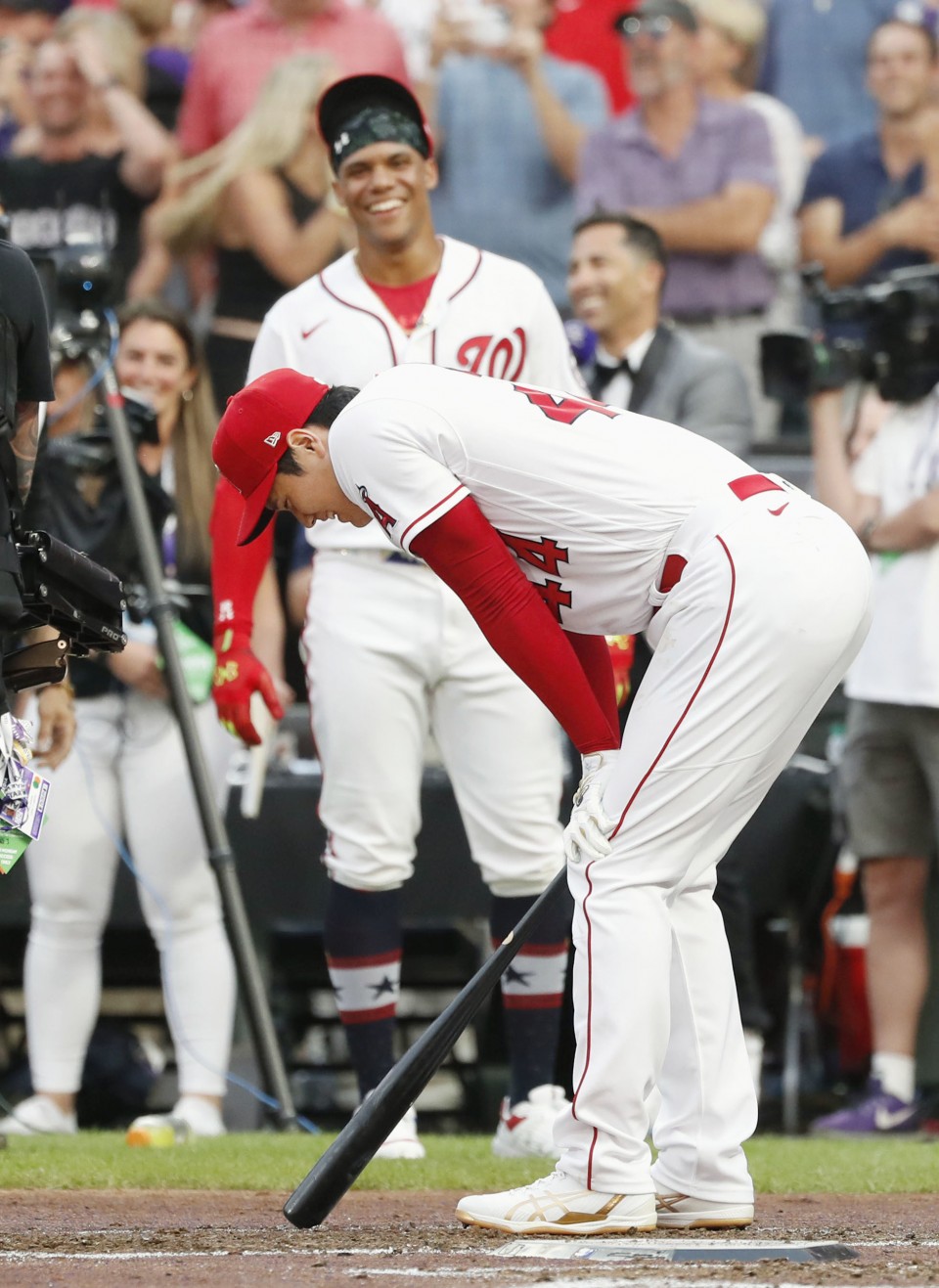 Shohei Ohtani (front) of the Los Angeles Angels rests after hitting in extra time during the first round of the MLB All-Star Home Run Derby against Juan Soto (back) of the Washington Nationals on July 12, 2021, at Coors Field in Denver, Colorado. (Kyodo) ==Kyodo 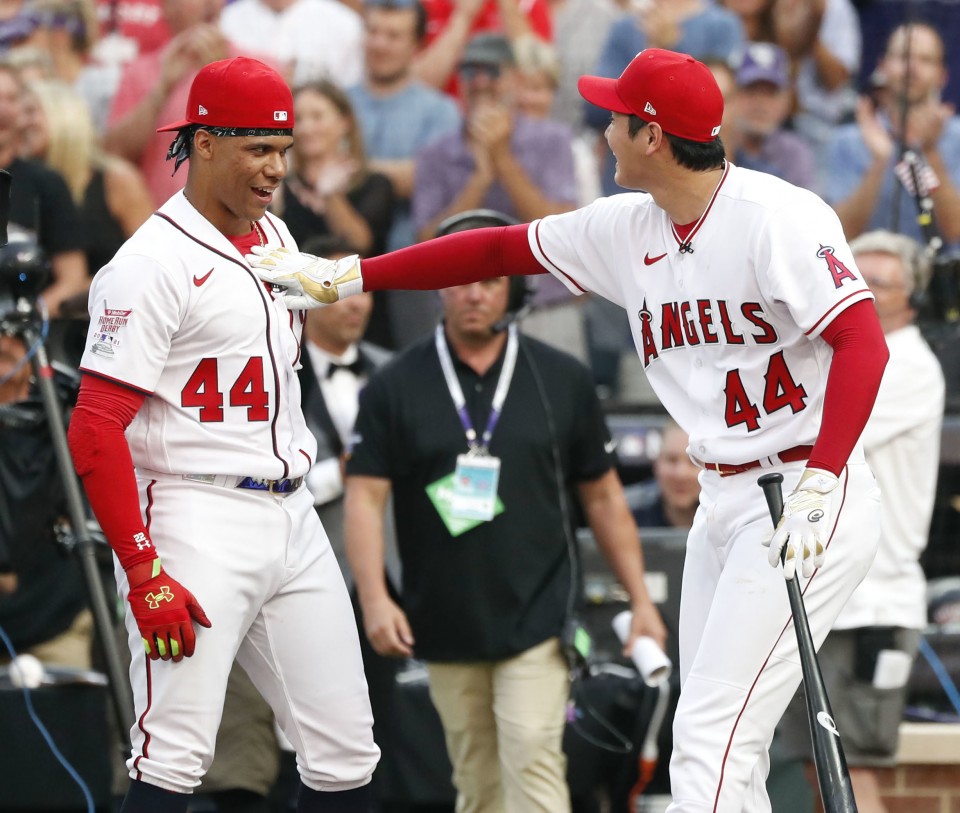 Shohei Ohtani (R) of the Los Angeles Angels congratulates Juan Soto of the Washington Nationals for his first-round win over Ohtani during the MLB All-Star Home Run Derby on July 12, 2021, at Coors Field in Denver, Colorado. (Kyodo) ==Kyodo

The Angels designated hitter and pitcher, who leads the majors with 33 home runs this season and is 4-1 with a 3.49 ERA in 13 starts, headlines the American League team as the first two-way player in the 88-year history of the All-Star Game.

He was already living up to the hype with his two-way prowess before his recent tear at the plate, during which he homered 16 times in the last 23 games.

He recently broke Hideki Matsui's single-season record for most homers by a Japanese-born player, and he is moving at a pace that will see him break Troy Glaus' franchise record of 47 homers set in 2000.

Although fans were denied a chance to see the MLB's leading home run hitter and odds-on favorite to win the Home Run Derby go all the way, they were treated to an incredible duel between two of the game's best power-hitters.

New York Mets slugger Pete Alonso, who hit a record 35 homers in the first round, rallied in the final round to beat Baltimore Orioles first baseman Trey Mancini, 23-22, becoming the third player ever to repeat as Home Run Derby champion.

On Tuesday night at Coors Field, Ohtani will be the first Japanese-born player to start the All-Star Game since Ichiro Suzuki in 2010. He will also become just the second Japanese pitcher to start an All-Star Game after Hideo Nomo in 1995.

MLB has adjusted its DH rules for the first time to allow Ohtani to pitch and lead off for the AL as a designated hitter.

Yusei Kikuchi and Yu Darvish, two of the three Japanese selected to All-Star teams this year, will not play in the game. 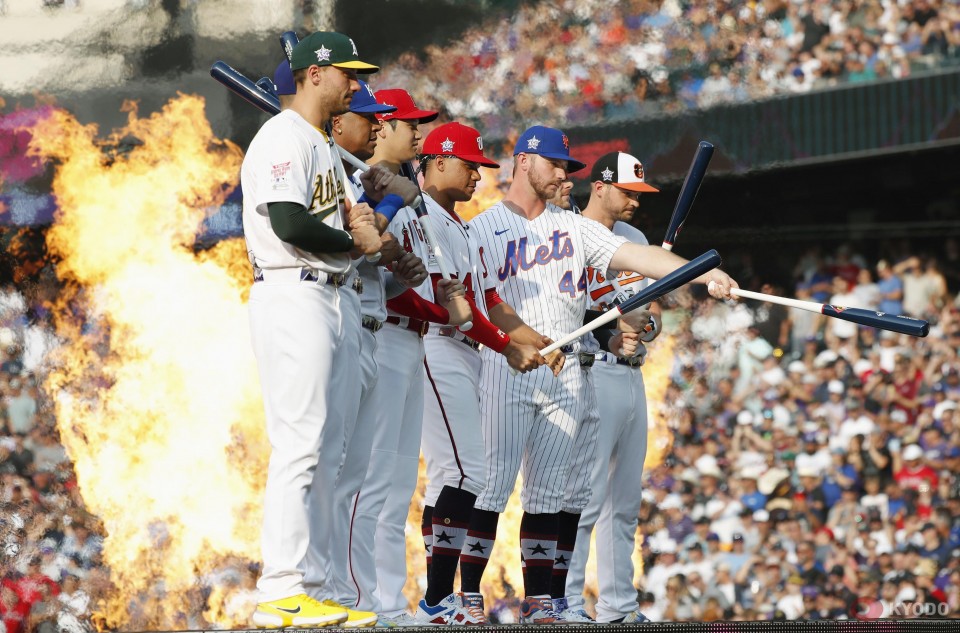 The eight players competing in the MLB All-Star Home Run Derby pose for a photo before the derby on July 12, 2021, at Coors Field in Denver, Colorado. (Kyodo) ==Kyodo 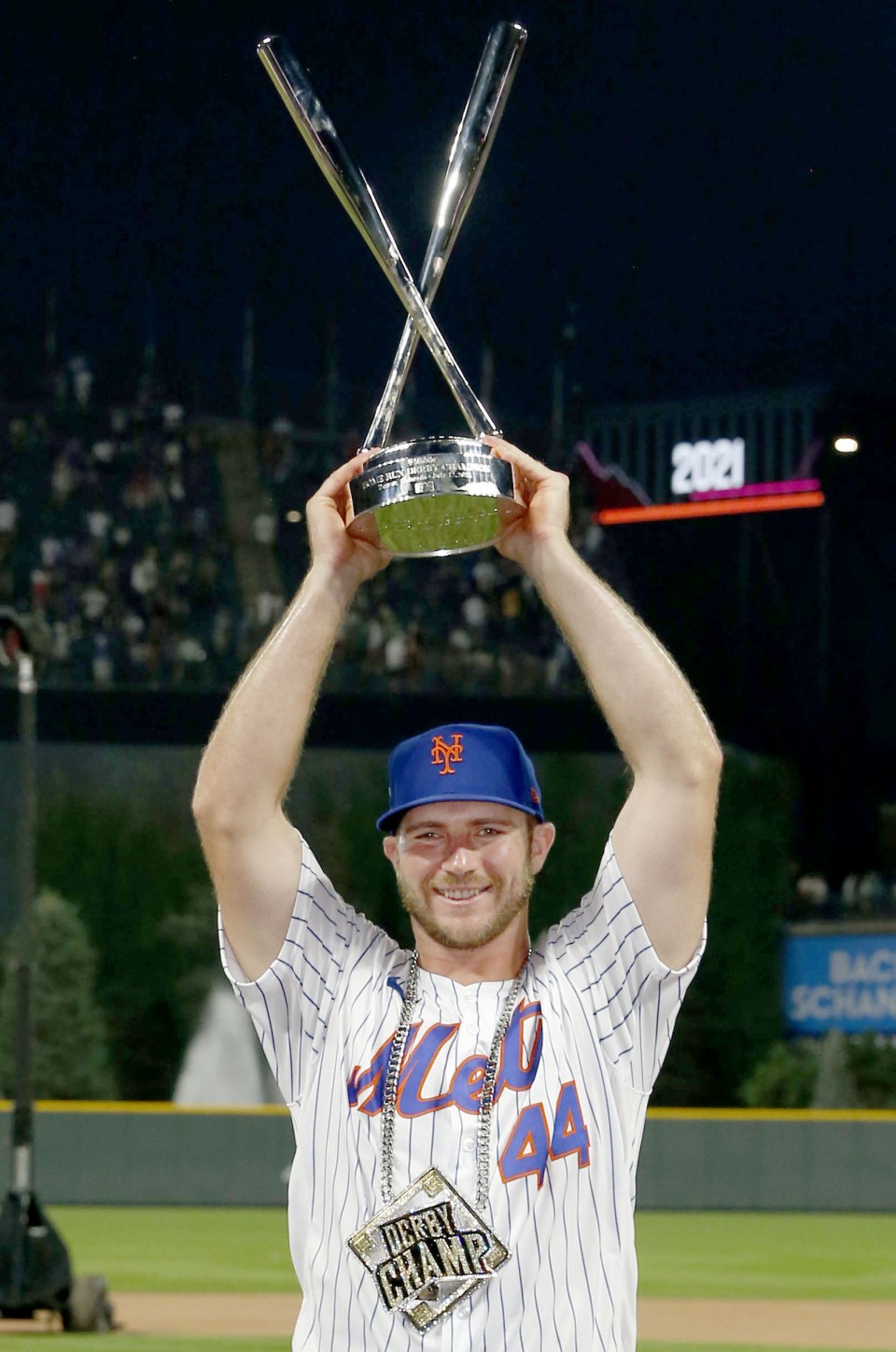 Pete Alonso of the New York Mets holds up the trophy after winning the MLB All-Star Home Run Derby on July 12, 2021, at Coors Field in Denver, Colorado. (Kyodo) ==Kyodo