Tokyo Olympic competition began after a one-year coronavirus postponement Wednesday, the first pitch of a softball game between Japan and Australia in Fukushima marking the start of a games that almost did not happen.

The host nation was able to begin on a high, homering three times in an 8-1 win at Fukushima Azuma stadium, north of the capital, in a game meant to showcase the region's recovery from the 2011 earthquake-tsunami-nuclear disaster. 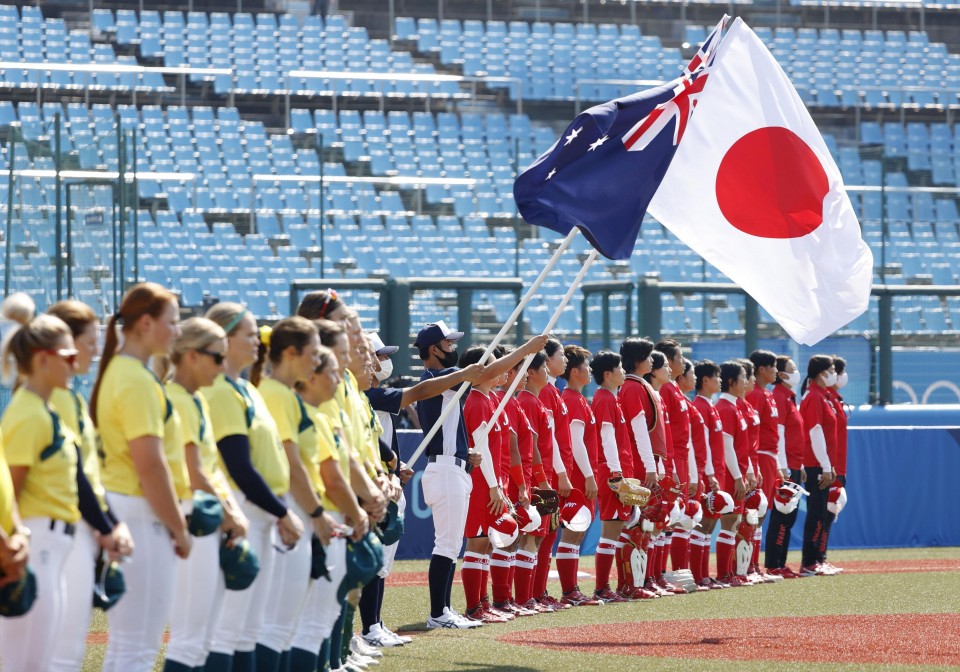 Players of Australia (L) and Japan line up before the Tokyo Olympic softball tournament's opening game at Fukushima Azuma stadium in Fukushima, northeastern Japan, on July 21, 2021, two days before the opening ceremony of the Olympics. (Kyodo) ==Kyodo

Tokyo Olympic organizing committee president Seiko Hashimoto and Olympic minister Tamayo Marukawa were among those taking part in the opening ceremony that preceded the game.

"I hope today marks a new step forward for the history of Tohoku," Hashimoto said of the impacted region after returning to Tokyo. "We'll think of projects that will enable people to harbor hope for the future."

Wednesday was not without negative news, though, with the Japanese capital reporting 1,832 new coronavirus cases, the highest figure since mid-January.

Health experts advising the Tokyo metropolitan government warned of a possible "critical" coronavirus situation in Tokyo, estimating a record 2,600 daily infections could be reported mid-games in August, fanning fears of the Olympics as a superspreader event.

Speaking at the IOC session in Tokyo earlier in the day, World Health Organization head Tedros Adhanom Ghebreyesus painted a grim picture of the global pandemic situation, warning that vaccinations need to be rolled out faster and wider, especially in low-income nations, for them to be effective in ending the pandemic.

"The pandemic is a test and the world is failing," the Ethiopian biologist said.

"By the time the Olympic flame is extinguished on the 8th of August, more than 100,000 more people will perish...none of us are safe, until all of us are safe."

"May these games be the moment that unites the world, and ignites the solidarity and determination we need to end the pandemic together."

The IOC session's second day that started with stark warnings from the WHO chief, ended with Brisbane being awarded the 2032 Olympic and Paralympic Games.

With no other candidate city, the capital of the Australian state of Queensland received 72 of 80 possible votes to win the bid.

For 19 days, through Aug. 8, some 11,000 athletes from 205 countries and regions will compete at venues in and outside the Japanese capital, which is currently under a state of emergency, its fourth since the start of the pandemic.

Sixteen months after the decision was made to delay the Olympics and two days before the official opening ceremony in Tokyo, the games in Fukushima were, like most other Olympic events, held behind closed doors due to surging infection figures.

Australia, with three softball bronze medals and a silver in the sport the Olympics restricts to women, took extra precautions considering the difficult circumstances, arriving in Japan on June 1 to ensure a good chance to prepare for the big event.

Softball, one of the sports added by Tokyo organizers, has returned to the Olympics for the first time since 2008, when Japan won its only gold medal in the sport. It has been joined by baseball, also dropped after 2008, and four new sports -- surfing, sport climbing, skateboarding and karate. 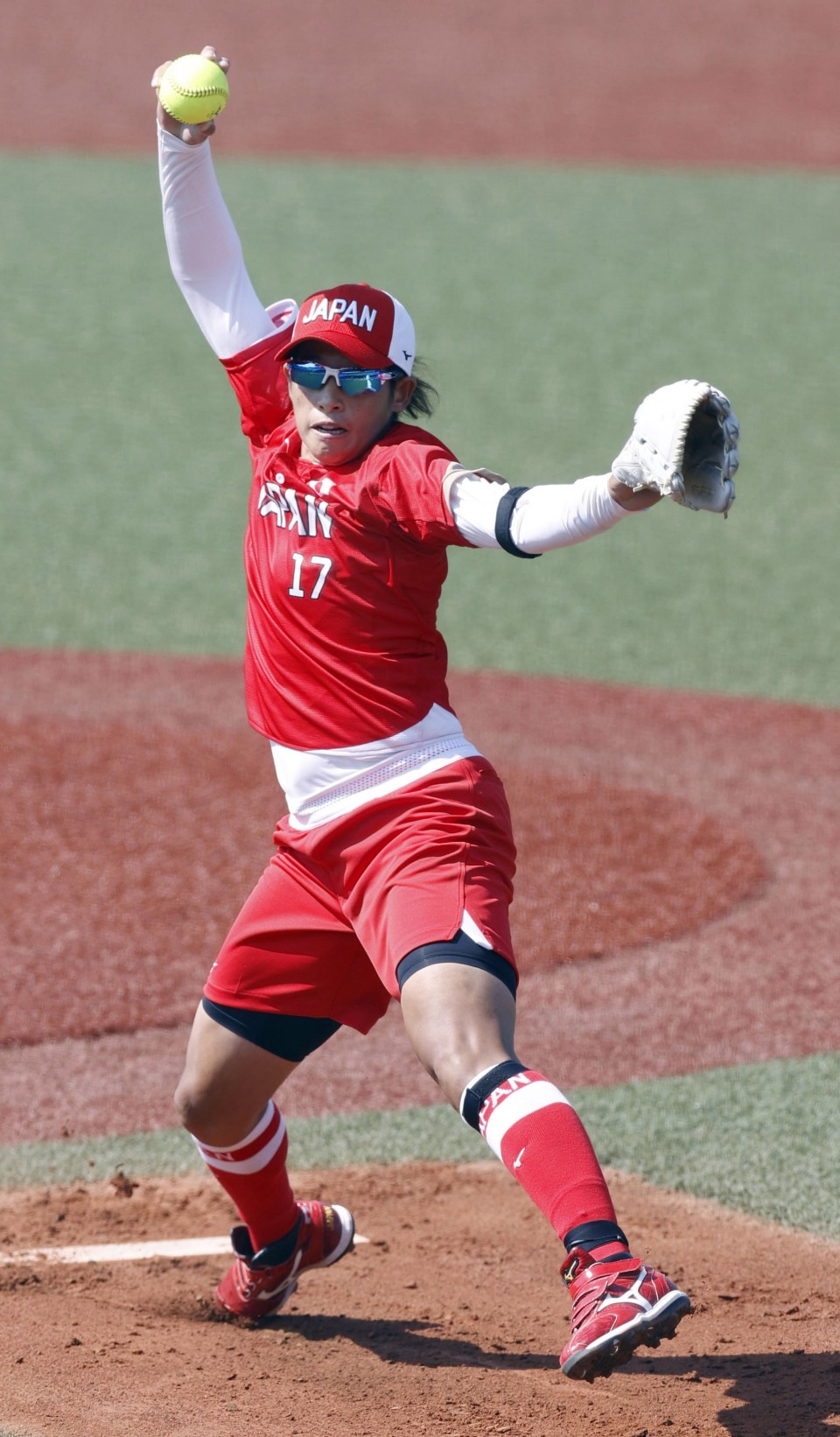 Yukiko Ueno of Japan pitches against Australia in the Tokyo Olympic softball tournament's opening game at Fukushima Azuma stadium in Fukushima, northeastern Japan, on July 21, 2021, two days before the opening ceremony of the Olympics. (Kyodo) ==Kyodo

In the softball opener, Minori Naito drove in two runs and scored three, while 38-year-old ace pitcher and 2008 Beijing Olympic hero Yukiko Ueno allowed a run over 4-1/3 innings to earn the win.

"Frankly speaking, I tried to be too fine with my pitches at the start. I got behind in counts and that cost us a run. That was frustrating," Ueno said. "But we came from behind to win by the mercy rule and got off to a good start."

Naito tied the game 1-1 in the first when she walked and scored on a Yu Yamamoto single.

Yamato Fujita, Japanese softball's answer to major league two-way star Shohei Ohtani as one of the team's top sluggers and pitchers, belted a two-run homer to make it 5-1 before a sixth run came in on a Nodoka Harada sacrifice fly.

Yamamoto ended the game by homering with Naito aboard in the fifth. 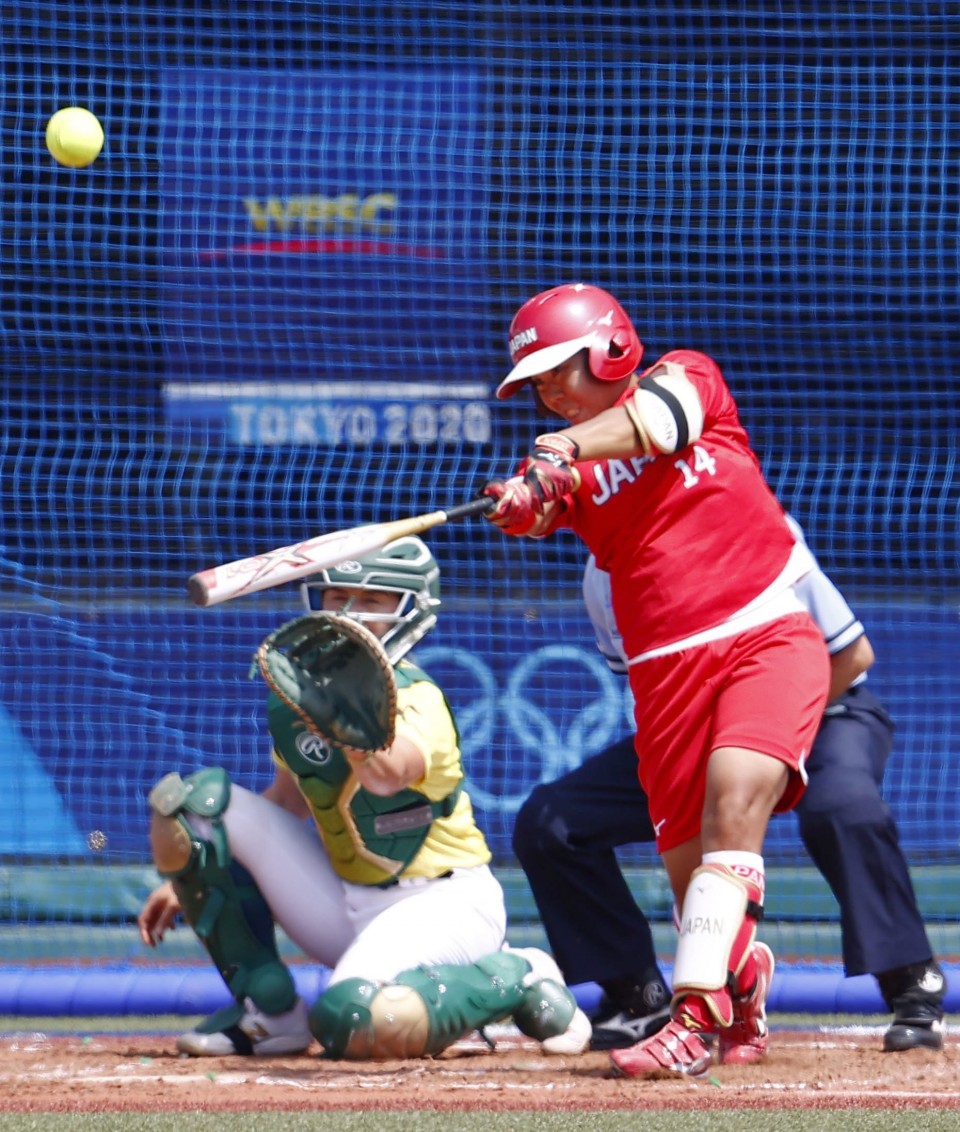 Minori Naito of Japan hits a two-run home run in the third inning of the Tokyo Olympic softball tournament's opening game against Australia at Fukushima Azuma stadium in Fukushima on July 21, 2021, two days before the opening ceremony of the Olympics. (Kyodo) ==Kyodo 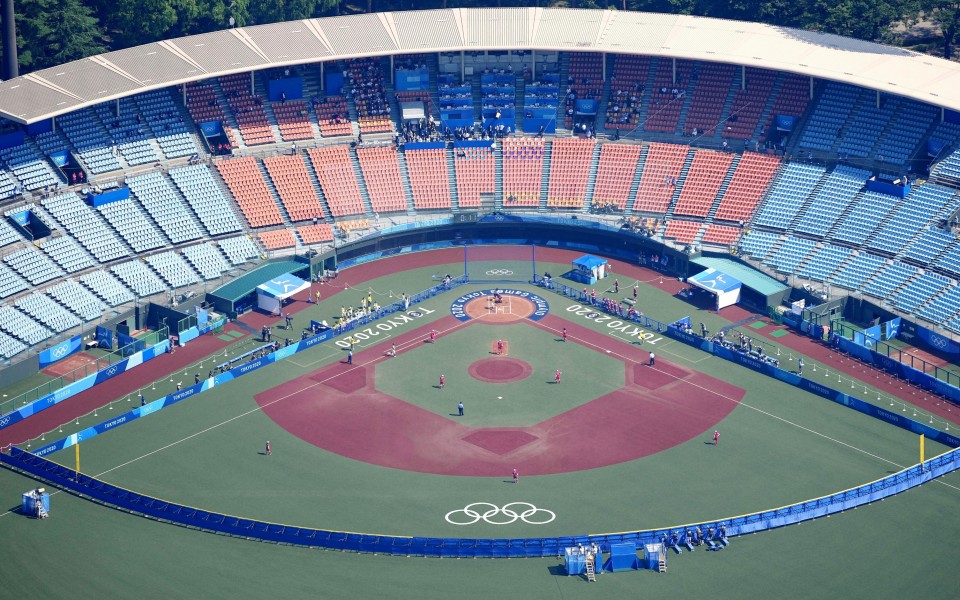 Photo taken July 21, 2021, from a Kyodo News helicopter shows Fukushima Azuma stadium in Fukushima, where the Tokyo Olympic softball tournament's opener between Japan and Australia was played without spectators in the stands amid the coronavirus pandemic two days before the opening ceremony of the Olympics. (Kyodo) ==Kyodo

Japan's women's soccer team ended the evening with a 1-1 draw against Canada in the teams' first match of the tournament.

After going behind on a 12th-minute goal by Canada's Christine Sinclair, Japan's Mina Tanaka was unable to convert a penalty, but the home team snatched a draw when Mana Iwabuchi caught the Canadian goalkeeper off her line and slotted a long-range right-footed shot in the 84th minute. 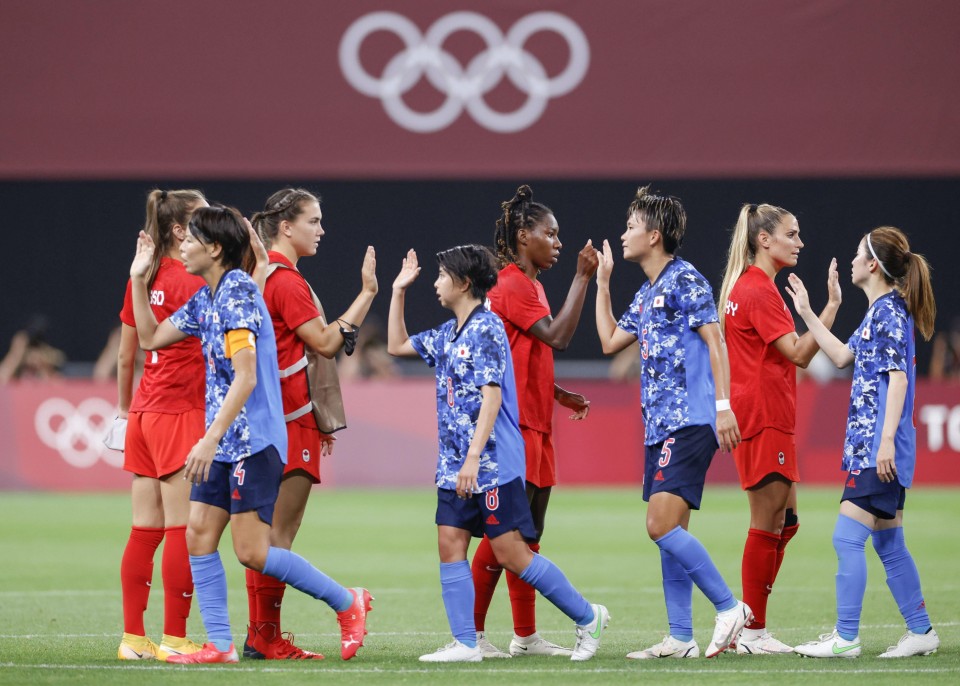 Players of Japan (blue) and Canada (red) exchange high-fives after a 1-1 draw in their Group E match of the Tokyo Olympic women's football tournament on July 21, 2021, at Sapporo Dome in northern Japan. (Kyodo) ==Kyodo