U.N. Secretary General Antonio Guterres pledged to promote multilateralism in addressing global challenges such as the coronavirus pandemic and climate change as he secured a second term Friday, with the General Assembly unanimously endorsing his bid to continue in the top post.

"All of this requires a reinvigorated multilateralism for the new era, based on principles of equity and solidarity," the 72-year-old said at a press conference.

Guterres is currently in the last year of his first five-year term. His staying on at the helm of the United Nations had been assured after the Security Council adopted a resolution earlier this month supporting his intention to continue. 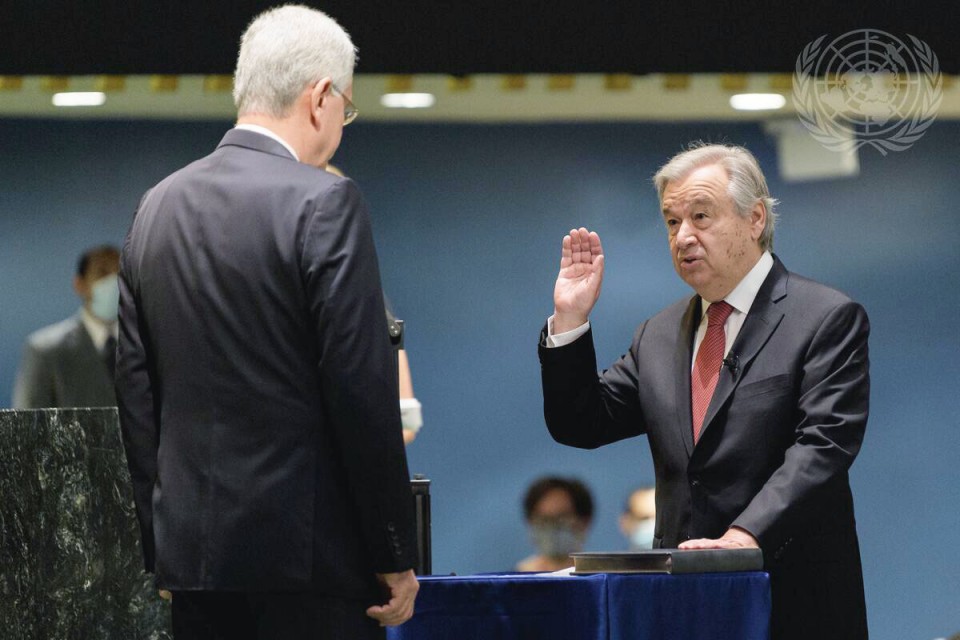 The U.N. General Assembly unanimously endorsed Antonio Guterres (R) to serve another five-year term as secretary general of the international body on June 18, 2021 (On courtesy of the United Nations)(Kyodo)

"I am deeply honored and grateful for the trust you have placed in me to serve as the secretary general of the United Nations for a second term," he said in a speech.

At the press conference later, Guterres said, "The pandemic has revealed our shared vulnerability, our inter-connectedness and the absolute need for collective action."

"Our biggest challenge -- and at the same time our greatest opportunity -- is to use this crisis as a chance to turn things around, to pivot to a world that learns its lessons, recovers fairer, greener and more sustainably, and forges ahead with much more effective global cooperation to address global concerns," he added.

It is customary in the United Nations for a secretary general to serve two terms. Guterres, who indicated in January that he planned to seek a second term, was the only official candidate.

The global challenges Guterres is expected to address during his tenure as U.N. chief through the end of 2026 also include human rights issues, nuclear disarmament and gender equality.

Following the endorsement of his second term by the General Assembly, some countries including Japan, China and the United States sent congratulatory messages.

"With a high evaluation of the role Mr. Guterres has played in addressing international issues, we will cooperate more closely with him," Japanese Prime Minister Yoshihide Suga said in a letter sent to the U.N. head.

Chinese President Xi Jinping also sent a telegram to Guterres, congratulating him on the reappointment and expressing hope that the U.N. chief will protect multilateralism from a universal and fair position, according to the state-run China Central Television.

Calling the United Nations "an indispensable anchor of the multilateral system," U.S. Secretary of State Antony Blinken said in a press release, "The United States looks forward to continuing our strong and constructive relationship with Secretary General Guterres as we advance the urgent task of bringing about a more peaceful world and prosperous future."

Guterres assumed the top U.N. post in January 2017 after serving as the Portuguese prime minister and the U.N. refugee chief.

In August 2018, he became the first sitting head of the international body to visit Nagasaki, one of the Japanese cities devastated by U.S. atomic bombing shortly before Japan's surrender in World War II, where he attended a ceremony marking the 73rd anniversary of the attack.

He has also indicated his intention to attend the 76th anniversary of the A-bomb in Hiroshima on Aug. 6 this year if the situation with the coronavirus pandemic allows him to fly to the western Japanese city.