North Korean leader Kim Jong Un has pledged to prepare for both "dialogue and confrontation" with the administration of U.S. President Joe Biden, state-run media reported Friday, with his country facing an economic slump amid the novel coronavirus pandemic.

It is thought to be the first time Kim has publically expressed an eagerness to talk with the Biden administration since it came to power in January, with denuclearization negotiations between North Korea and the United States stalled for around 18 months. 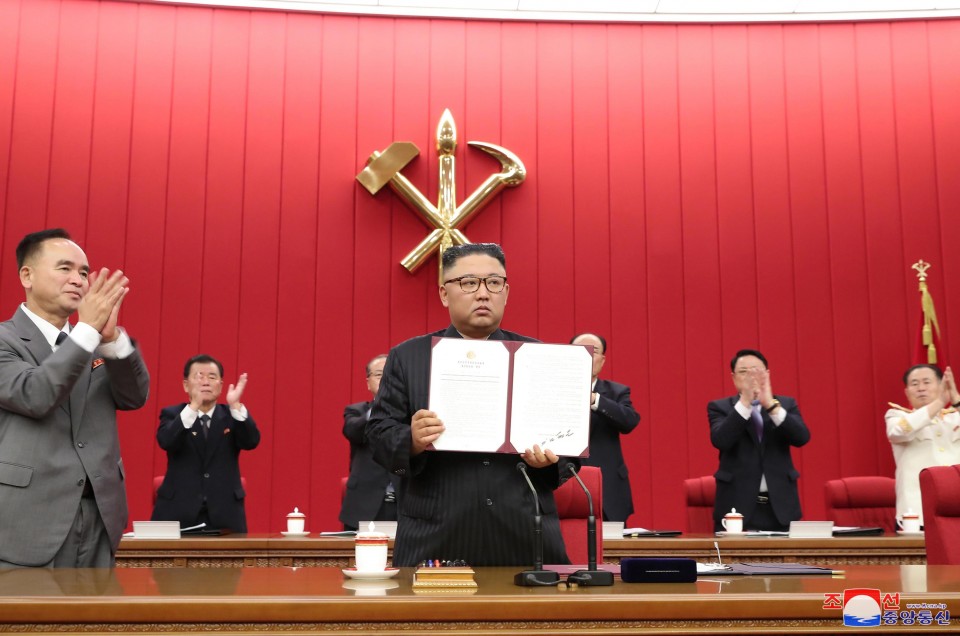 At a plenary meeting of the Central Committee of the ruling Workers' Party of Korea held on Thursday, Kim "made detailed analysis of the policy tendency of the newly emerged U.S. administration," the official Korean Central News Agency said.

Kim "stressed the need to get prepared for both dialogue and confrontation, especially to get fully prepared for confrontation in order to protect the dignity of our state and its interests for independent development," according to the news agency.

He "called for sharply and promptly reacting to and coping with the fast-changing situation and concentrating efforts on taking stable control of the situation on the Korean peninsula," it added.

Kim's remarks came after South Korea's Foreign Ministry said its senior officials will meet Monday with representatives of the United States and Japan to exchange views on the North.

The three officials are expected to discuss prospective measures to be put in place regarding North Korea as the Biden administration has recently finished a review of its North Korea policy.

North Korea had voiced a reluctance to hold bilateral talks with the Biden administration unless Washington withdraws what Pyongyang considers its hostile policy position.

But some foreign affairs experts said Kim might be keen to resume communication with the United States to receive economic aid, as the nation's economy has been languishing with its trade with China, known as Pyongyang's closest and most influential ally in economic terms, choked in the wake of the spread of the coronavirus.

North Korea depends on China for over 90 percent of its trade.

North Korean media also reported this week that at a party meeting on Tuesday, Kim expressed concern over the people's food situation following powerful typhoons and flooding last year, describing it as "getting tense."

As virus cases increased in China after first being detected in Wuhan in late 2019, North Korea moved to cut off traffic to and from its neighbors early last year in a bid to keep the virus at bay. The border closure remains in place, with North Korea claiming no infections have been spotted at home.

Pyongyang has also been apparently tightening security along its border since a highly contagious variant of the virus originally discovered in India was confirmed in China last month for the first time.

The Chinese government released data on Friday showing the total volume of China's trade with North Korea in May plunged 88.7 percent from a month earlier to $3.46 million.

At their first summit in 2018 in Singapore, Kim and Biden's predecessor Donald Trump agreed Washington would provide security guarantees to Pyongyang in return for "complete" denuclearization of the Korean Peninsula.

The following year, they fell short of bridging the gap between U.S. demands and North Korea's calls for sanctions relief at their second summit in the Vietnamese capital Hanoi.

Trump and Kim met in June 2019 at the Demilitarized Zone dividing the two Koreas, but bilateral negotiations have been at a standstill, with a working-level meeting held in the Swedish capital Stockholm in October that year ending without progress.

KCNA did not elaborate on whether Kim mentioned nuclear weapons and intercontinental ballistic missiles at Thursday's gathering.

North Korea is believed to be vulnerable to infectious diseases due to chronic shortages of food and medical supplies triggered by international economic sanctions aimed at thwarting its nuclear and ballistic missile ambitions.