Organizers of the Tokyo Olympics and Paralympics have begun accepting cancellations from schools no longer wishing to participate in a program that offers students the chance to watch events at nearby venues.

Some local governments close to Tokyo have already opted out of the program because of concerns over coronavirus infections, and with the organizers yet to decide on a cap on spectators, many education boards remain uncertain if students will be able to watch athletes competing in the games. 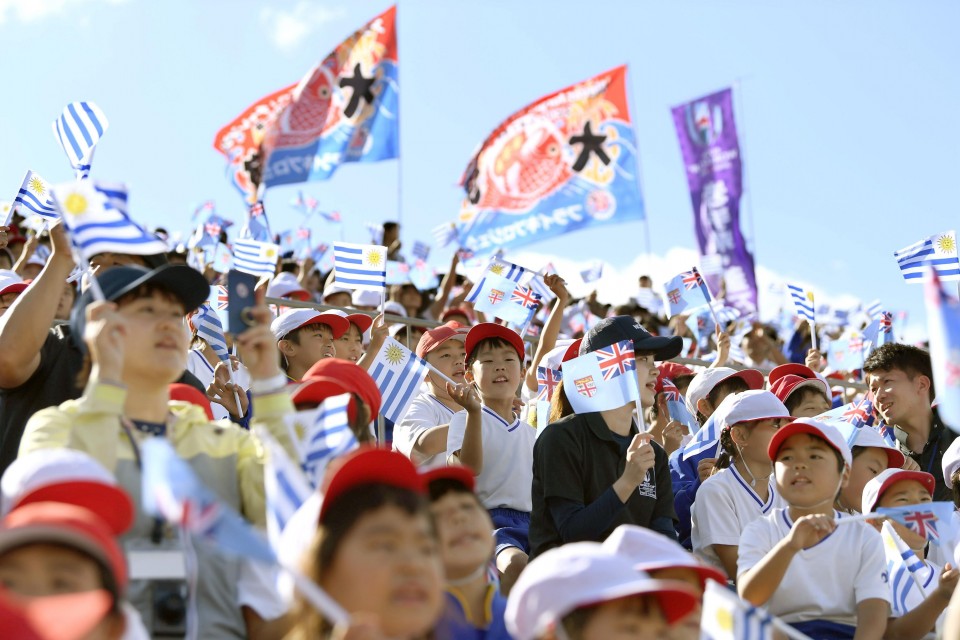 Children sing a song of thanks for reconstruction support before a Rugby World Cup match in September 2019 in Kamaishi, an Iwate Prefecture city hit hard by the 2011 earthquake-tsunami disaster in northeastern Japan. (Kyodo)

In Nakai, Kanagawa Prefecture, 320 elementary and junior high school students were scheduled to watch soccer and baseball matches in Yokohama, but the town's board of education decided to pull out this month based on the views of school principals.

"We had planned to travel by train, but the risk of infection is high," said Tetsuya Takahashi, chief of the town's education division.

The spectator program provides tickets of the Olympics, which were supposed to be staged in 2020 but were postponed for one year due to the coronavirus pandemic, to schools and local governments at a discounted price of 2,020 yen ($18).

According to the organizing committee, there were around 1.28 million purchase requests as of January last year.

At the 2019 Rugby World Cup in Japan, children who were invited to watch matches sang the national anthems of the participating countries. But the Olympic organizers have deemed cancellations for the program inevitable in light of the postponement and the pandemic.

Kawagoe, Saitama Prefecture, which is set to host the golf competition, had originally requested 5,558 tickets. They were mainly for golf and soccer matches to be held in the prefecture, but the number had fallen to around 2,400 as of last Wednesday after schools were asked to confirm their ticket requests.

A local official said there seems to be at least one municipality in the prefecture that has already called off the program entirely.

Meanwhile, the Yokohama Board of Education is reconfirming whether 323 schools that had planned to watch the games will go ahead with their plans.

"Too many things are up in the air, such as media reports that negative PCR test results are required. Still, we would like to let (the students) go if they can," said an official of the education board.

An official of Chiba Prefecture said it wanted to make a decision after the central government had announced the spectator limit at venues and other infection control measures.

Live screenings and other public gathering events have come under intense scrutiny over concerns of the virus' spread, causing many to be scrapped.

Regarding whether the spectator program will still go ahead, Olympic minister Tamayo Marukawa said in response to parliamentary questioning Monday that a decision would be made "in consultation with the education ministry and the (Olympic) organizing committee when the cap on spectators is decided in June."

With about 40 days to go before the Olympic opening ceremony, Tokyo has been under a state of emergency since late April in an effort to bring down the number of infections. As of summer 2019, the capital had planned to have around 900,000 students from public and private schools attend the games.

"We understand that people are concerned about the infection situation. We are prepared to cancel the program if we determine that safety and security cannot be ensured, and we will make arrangements so cancellations can be done even on the day," a metropolitan government official said.