Japan's Naoya Inoue cruised to another defense of his IBF and WBA bantamweight world titles Saturday, knocking out Michael Dasmarinas of the Philippines in three rounds to improve to 21-0 with 18 KOs.

Inoue, nicknamed "The Monster," sent Dasmarinas to the canvas with a body shot in the second round before landing two more in the third to dispatch the IBF's first-ranked challenger. 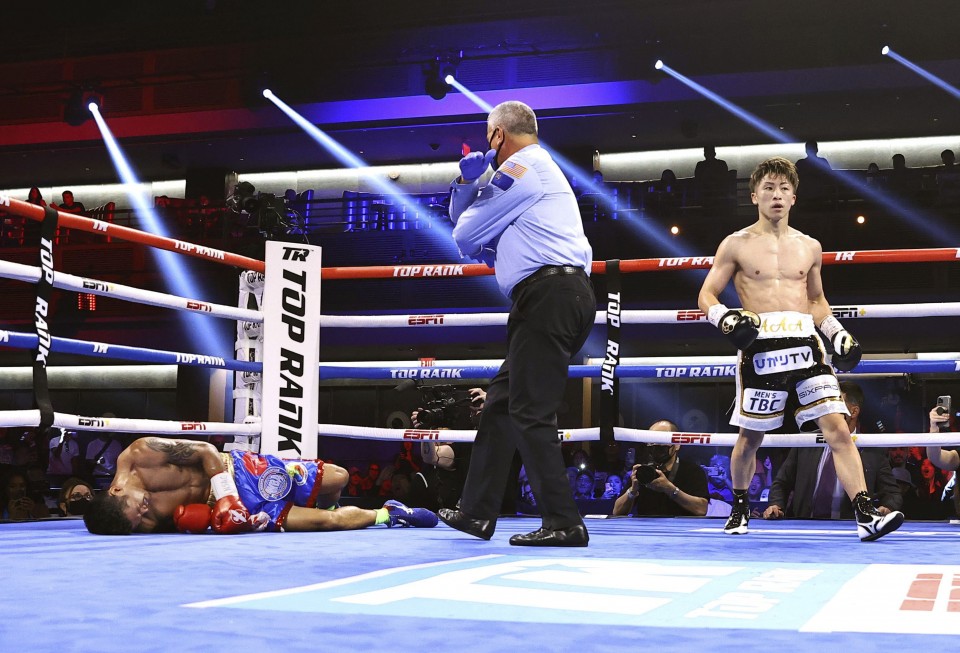 The 28-year-old extended his Japanese record for consecutive world title victories to 16, while notching a national-record 14th-straight world title KO.

"(Dasmarinas) didn't come out as much as I thought he would, starting the bout trying to keep the distance," said Inoue, who defended his WBA title for the fifth time and IBF crown for a third time at Virgin Hotels Las Vegas.

"I thought it would take a bit of time to knock him out (attacking his head), so I switched to the body."

Inoue kept southpaw Dasmarinas within his reach, using the first round to size up his opponent before unleashing his first ferocious blow in the second.

He inflicted more damage in the round by landing heavy blows with his left before finishing the job in the third, flooring Dasmarinas twice in a similar fashion.

"I could sense him wince once I landed the first one. From there I could fight at my pace," said Inoue, whose previous win came on Oct. 31 last year at the MGM Grand Conference Center, in his highly anticipated Vegas debut.

The seventh-round knockout of Australian challenger Jason Moloney, however, took place behind closed doors amid the coronavirus pandemic, and Inoue was happy to get the feel of the Vegas crowd.

"The cheers provided more of a festive atmosphere, different from Japan," said Inoue, a three-weight world champion, having also been WBC light flyweight and WBO super flyweight champion earlier in his career.

Dasmarinas' record dropped to 30-3 with 20 KOs and one draw.

WBC champion Nonito Donaire and WBO belt holder John Riel Casimero were both present at the venue to witness another Inoue victory. The two boxers from the Philippines will face each other in a title unification bout in Los Angeles on Aug. 14.

"Making my presence felt (by them) was definitely one (intention)," said Inoue, who beat Donaire by unanimous decision in November 2019.

"It is necessary to unify four organizations in order to become the No. 1 (in bantamweight). I'm almost there."