Hundreds of companies in Japan apply for on-site vaccinations

Japan's COVID-19 vaccination efforts received another boost Tuesday as major companies and universities filed requests for vaccinating employees, staff and students at more than 400 workplaces and campuses starting as early as later this month.

Those companies and universities include ANA Holdings Inc., East Japan Railway Co., Marubeni Corp., Keio University and Hiroshima University, as well as the operator of Osaka Prefecture University and Osaka City University, with the government aiming for the start of the new vaccination scheme on June 21.

While the firms and the universities will need to secure venues and medical personnel independently, the government will shoulder necessary costs and equipment in principle. 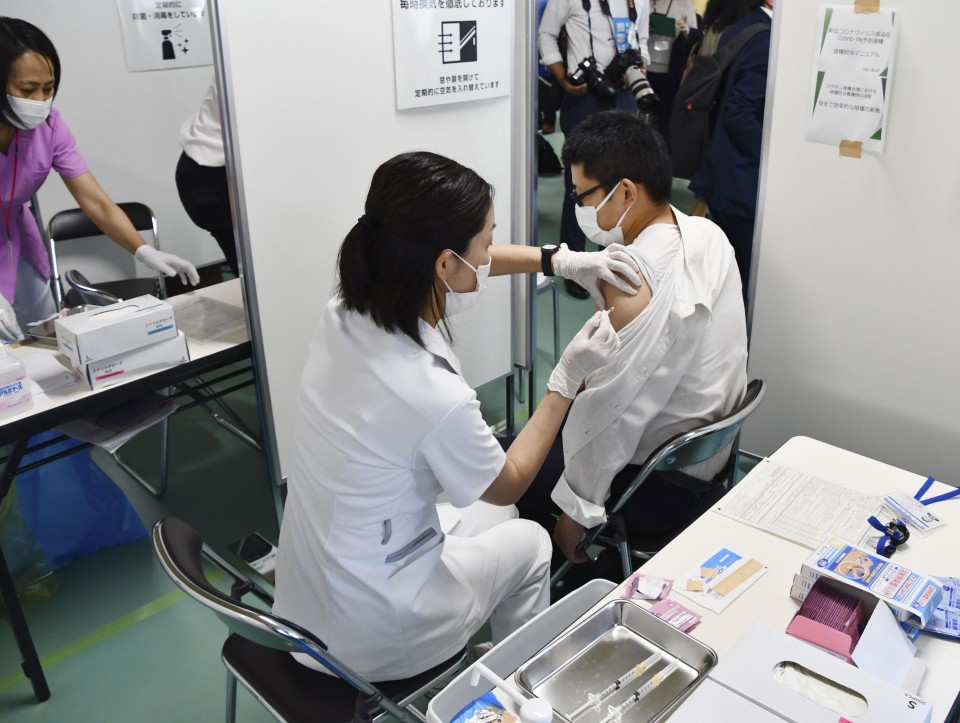 A Tokyo Fire Department employee receives a COVID-19 vaccine on June 8, 2021, at a mass vaccination center set up on the former site of the Tsukiji fish market in Tokyo. (Kyodo) ==Kyodo

"Together with the inoculation program implemented by local governments, we will make utmost efforts so that more people can receive vaccinations as soon as possible," Chief Cabinet Secretary Katsunobu Kato said Tuesday, referring to the new on-site scheme using the vaccine developed by U.S. pharmaceutical company Moderna Inc.

The companies are asked to provide at least around 1,000 people two shots at the same venues, prioritizing seniors and people with underlying medical conditions.

For small- and medium-sized companies that face difficulties securing health care professionals, the Tokyo Medical Association said it plans to dispatch vaccination teams in cooperation with other related organizations.

Taro Kono, the minister in charge of Japan's vaccination efforts, said some workplaces and universities in areas where vaccinations of the elderly are already under way may start inoculations earlier than June 21.

It is hoped that the new vaccination plan, along with existing efforts being led by local municipalities, will accelerate the country's inoculation drive, which has lagged behind other developed nations.

The metropolitan government plans to administer doses of the Moderna vaccine to 5,000 people a day, initially targeting police officers and firefighters, and 110,000 people in total by the end of June at the Tsukiji site.

The scope of recipients at the site will expand from those working at the Metropolitan Police Department and Tokyo Fire Department to volunteer members of local fire corps, acupuncturists, osteopaths and others aged 64 or younger.

To avoid a lack of staff due to adverse reactions to vaccination, the police department has decided to limit the daily number of personnel who receive shots to 8 to 10 percent of its 52,000 workers. The fire department has also decided that workers who are off duty the following day should receive the jabs.

"I'm relieved to receive a shot. But since I just got the first (of the two doses), I'll continue thorough anti-virus measures," said a 42-year-old Tokyo Fire Department official.

Tokyo Gov. Yuriko Koike told reporters that the metropolitan government will further improve the running of the Tsukiji vaccination site to increase the efficiency of the inoculation campaign.

The vacant lot that formerly hosted the fish market can only be used until the end of June as it will become a major transportation hub for the Tokyo Olympics slated to begin in late July. The metropolitan government is scheduled to open a new mass vaccination site at Yoyogi Park in the capital.

Japan launched its inoculation drive in February starting with health care workers and later expanded it to people aged 65 or older. The government aims to complete the vaccinations of the elderly by the end of July.

Mass vaccination centers have already been set up by the central government in Tokyo and Osaka, while some other prefectural governments have also established them to speed up the vaccine rollout.