Japan to start COVID-19 vaccinations at workplaces on June 21

Japan will start COVID-19 vaccinations at workplaces and universities on June 21 to speed up the pace of the country's sluggish vaccine rollout, its top government spokesman said Tuesday.

Chief Cabinet Secretary Katsunobu Kato told a news conference the starting date could be brought forward if the government believes there is a prospect of completing the ongoing vaccination of those aged 65 or older ahead of the initial goal of the end of July.

The expansion in the number of vaccination sites is meant to "reduce the burden on local communities and accelerate the pace of inoculation," Kato said, adding that the two-dose vaccine developed by U.S. biotech firm Moderna Inc. will be used.

The plan was announced a day after two state-run mass inoculation centers staffed by Self-Defense Forces personnel in Tokyo and Osaka started full operations, reaching their respective targets of offering a maximum of 10,000 and 5,000 jabs per day.

Firms and universities will determine who will be inoculated, Kato said, adding that family members of employees are likely to be eligible, while also recommending that the elderly and those with underlying conditions be given priority.

According to Kato, companies and universities will be responsible for securing medical personnel to administer the vaccinations. A dearth of doctors and nurses to give shots is one of the key factors behind Japan's slow inoculation program, which is lagging behind other developed countries. 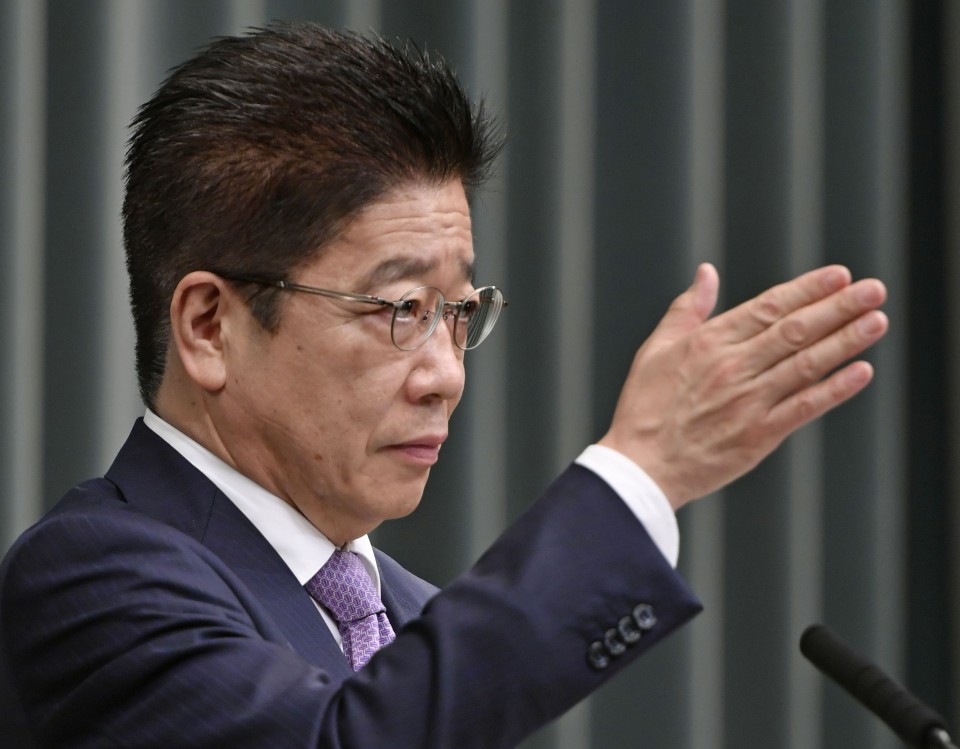 Around 2,600 new coronavirus infections were reported nationwide on Tuesday, with Tokyo accounting for 471 cases, followed by Hokkaido at 254, Okinawa at 223 and Osaka at 201.

The number of COVID-19 patients in serious condition decreased by 26 from the previous day to 1,323, according to the health ministry.

Since Japan's vaccination program was launched in February, initially for health care workers and then expanded to the elderly in April, only around 7 percent of the country's 126 million people have received at least one dose.

The government had planned to vaccinate those with underlying conditions next along with those working for nursing homes after finishing vaccinating the elderly.

Amid criticism for its failure to procure enough doses from abroad, the government earlier Tuesday crafted a long-term national strategy on vaccine development aimed at facilitating domestic research and production to deal with the coronavirus and other pandemics.

"From the standpoint of crisis management, it is extremely significant to establish a system that enables the development, production and administering of domestically developed vaccines," Prime Minister Yoshihide Suga told a government panel meeting, during which the new strategy was endorsed.

Under the plan, the government will seek to strategically distribute research funds to institutions to help promote vaccine development and buy vaccines created by domestic firms.

The government will also consider a system that would allow fast-track vaccine approval to deal with emergencies, looking at how other countries respond to such crises.

The strategy also calls for Japan to be proactively involved in the Gavi public-private global vaccine alliance and other related international frameworks.

The COVID-19 state of emergency in Tokyo, Osaka and seven other prefectures was extended on Friday by three weeks to June 20 -- just over a month before the Olympics begin in the capital -- as the medical system remains under severe strain amid a fourth wave of infections.