A bronze statue of the late Japanese comedian Ken Shimura was unveiled Saturday in his hometown of Higashimurayama in Tokyo, in memory of the slapstick legend who died of pneumonia caused by the novel coronavirus last year.

The statue showing Shimura's signature pose widely known as "Aiin" throughout the country was installed at an entrance of Seibu Railway's Higashimurayama Station after funds were raised through a crowdfunding project. 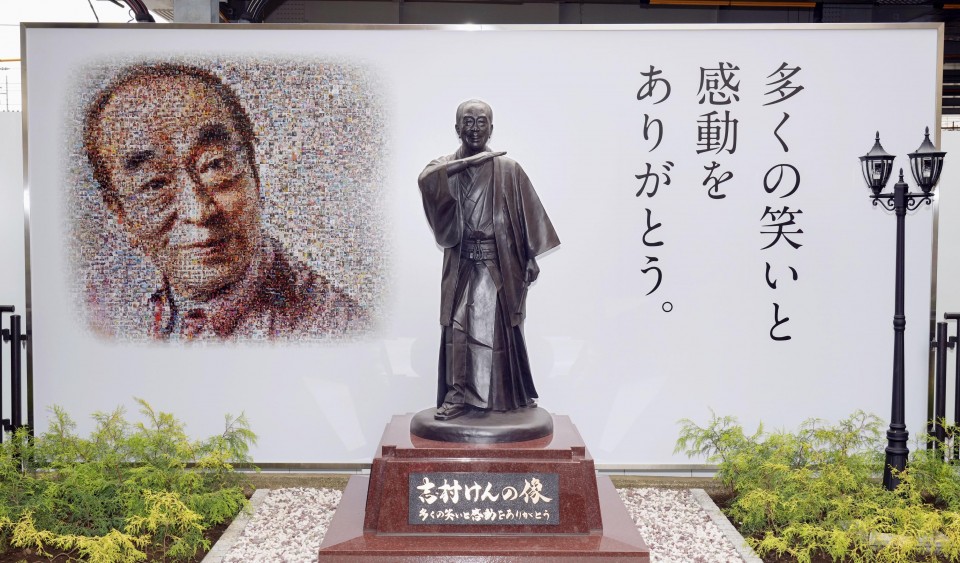 A statue of the late comedian Ken Shimura is unveiled in his hometown of Higashimurayama, western Tokyo, on June 26, 2021. Shimura died in March 2020 due to the new coronavirus. (Kyodo) ==Kyodo

The organizers of the crowdfunding campaign raised more than 27 million yen ($243,000) from about 6,500 people to make the statue of Shimura, who was also a one-time member of rockabilly band and comedy group The Drifters.

On Saturday, Shimura's older brother Tomoyuki and Boo Takagi, one of the surviving members of The Drifters, attended the unveiling ceremony.

"I am happy to unveil the magnificent statue with the support of my brother's fans all over the country, from Okinawa to Hokkaido," Tomoyuki Shimura said.

Ken Shimura, who was adored by generations of Japanese, died on March 29 last year at the age of 70, after having contracted the virus.