Leaders of the Group of Seven industrialized nations on Saturday sought to counter China's growing economic clout by agreeing to launch a new infrastructure project for the developing world as an alternative to Beijing's Belt and Road Initiative. 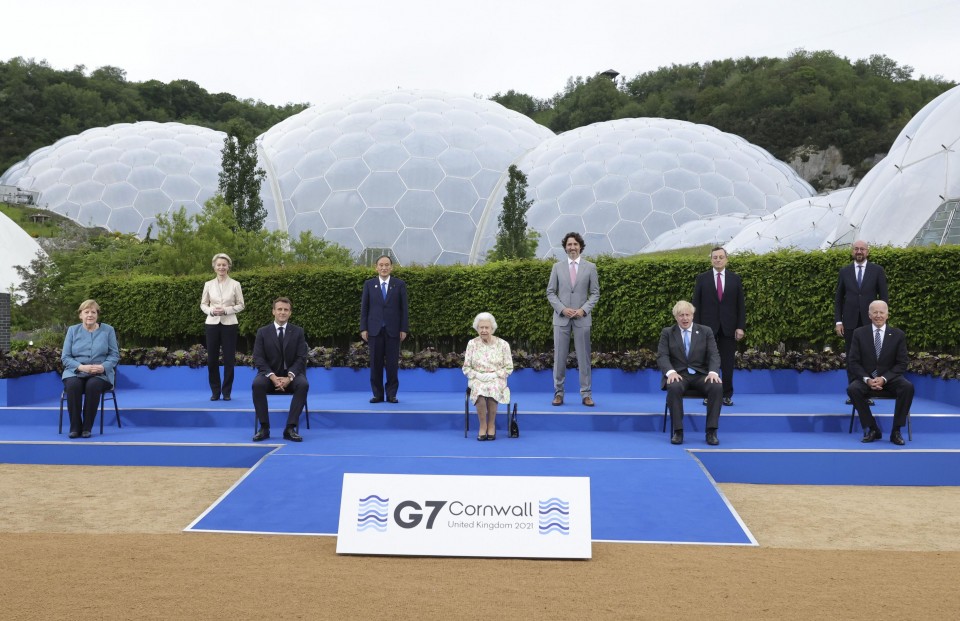 Group of Seven leaders and Queen Elizabeth II (C) pose for a group photo before the leaders' evening dinner and reception on June 11, 2021 in Cornwall, England. (Andrew Parsons/No 10 Downing Street)(Kyodo)

The agreement on the "Build Back Better World" infrastructure initiative can be seen as a key deliverable of the summit, as the bloc of wealthy democracies -- Britain, Canada, France, Germany, Italy, Japan and the United States, plus the European Union -- explores ways to better contribute to the world in the face of China's rise.

With the participation of the private sector, the initiative is intended to collectively catalyze hundreds of billions of dollars of infrastructure investment for low- and middle-income countries in the coming years, the White House said.

The project, which will be global in scope, ranging from Latin America to Africa and the Indo-Pacific, will not "just be an alternative to the BRI" but is expected to "beat the BRI by offering a higher-quality choice," a U.S. official said.

Chinese President Xi Jinping has advocated the BRI since 2013 to increase Beijing's influence abroad by financing and building infrastructure projects across Asia, Europe and Africa.

But it has been criticized for a lack of transparency, poor environmental and labor standards, and its record of saddling developing countries with debt.

The demand for high-quality physical, digital and health infrastructure is high, the White House said, citing a World Bank estimate showing a cumulative $40 trillion worth of infrastructure needs in the developing world through 2035.

The U.S. official said it is not the intention of the United States to force other countries to choose between the world's two largest economies, but rather to show to others that democracies are a better model than what Washington labels as autocracies such as China.

U.S. President Joe Biden has been rallying allies and like-minded countries to counter China's growing military and economic assertiveness, framing the competition between the two countries as a contest between democracies and autocracies.

During the summit, Biden, who has placed an emphasis on promoting human rights, pressed his G-7 peers to publicly call out China over allegations of forced labor practices involving the Uyghur minority.

But an administration official acknowledged a "differentiation of opinion" among G-7 members as to how hard they are willing to push the issue, apparently taking into consideration each country's unique relationship with the world's second-largest economy.

The G-7 leaders are scheduled to wrap up their discussions on Sunday, with a joint communique expected to be released.

The first day of the talks had centered on ways to help the world recover from the coronavirus pandemic and restore the pandemic-hit global economy.

Foreign policy issues were discussed on the second day of the summit, including North Korea and Myanmar.

Suga said addressing the issue of North Korea's past abductions of Japanese nationals is a top priority for his government and called for "full understanding and cooperation" on the matter, to which his G-7 counterparts agreed, according to the Japanese Foreign Ministry.

He also expressed support for the diplomatic efforts the Biden administration has decided to pursue in dealing with North Korea following its months-long policy review.

The Japanese prime minister, meanwhile, condemned the Feb. 1 military coup in Myanmar and called on the G-7 members to back efforts by the Association of Southeast Asian Nations to seek a breakthrough in the situation.

Japan, for its part, will continue to use its channels with the Myanmar military to try to persuade the junta to reverse course, Suga told the gathering.