Eleven Myanmar diplomats in the United States and Switzerland are creating a united front as they seek to remain in their host countries in protest against the country's military junta, refusing to return home, the country's ambassador to the United Nations said Monday.

In an exclusive interview with Kyodo News, Myanmar Ambassador Kyaw Moe Tun said the 11 are among around 20 diplomats in seven countries who have joined the civil disobedience movement amid the continued use of violence against protestors by Myanmar security forces since the Feb. 1 military coup. 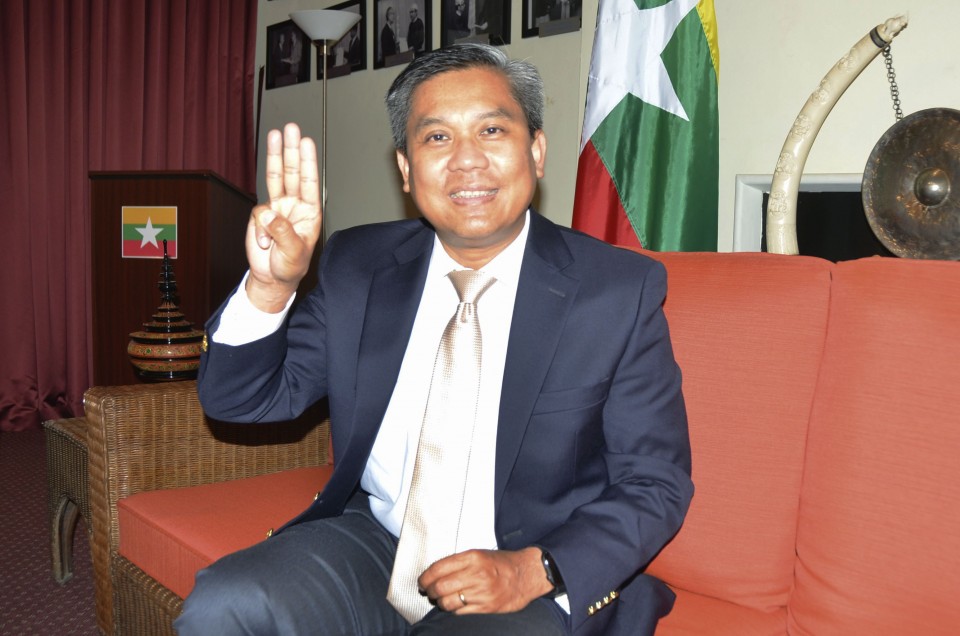 The 51-year-old envoy to the world body has continued to criticize the Myanmar junta, using the three-finger salute shared by opponents of the military takeover.

According to the envoy, four Myanmar diplomats in Washington and three in Los Angeles are applying for temporary protected status as their diplomatic status is set to end, while four in Geneva are also asking Swiss authorities to enable them to remain there.

The other diplomats opposing the junta are in Canada, France, Germany, Israel and Japan, he said.

The revelation by the ambassador came after Myanmar national soccer goalkeeper Pyae Lyan Aung applied for refugee status in Japan last week. He has expressed fear for his life for making the three-finger salute in protest against the coup during a match in May.

The ambassador's remarks suggest that the momentum against the military government is growing among Myanmar diplomats overseas as well.

Asked about his own situation, Kyaw Moe Tun indicated he will also seek an extension of his stay in the United States with temporary protected status or in some other form.

"The military (has) already charged me high treason...So I definitely cannot go back (to Myanmar)," the envoy said.

With regard to the soccer goalkeeper, the ambassador said, "I salute him," saying he helped make the international community aware of "what's happening in Myanmar."

Kyaw Moe Tun, meanwhile, showed disappointment at a U.N. General Assembly resolution adopted earlier this month, saying it took almost three months to deliberate and had its contents watered down.

On Japan, the ambassador expressed gratitude for support but wants stronger and more decisive actions from Tokyo, urging the country to suspend investment in Myanmar and financial flows to the military until a civilian government takes power again.