The U.S. military's top officer on Wednesday reiterated his view that China is not likely to attempt to take over Taiwan militarily within the next "one to two years," amid growing attention to the timeline of a possible Chinese invasion of the island democracy.

"I don't see it happening right out of the blue, there's no reason for it," Gen. Mark Milley, chairman of the Joint Chiefs of Staff, told a congressional hearing, adding that an invasion aiming to seize an island as big as Taiwan and with its level of defense capability would be "extraordinarily complicated and costly." 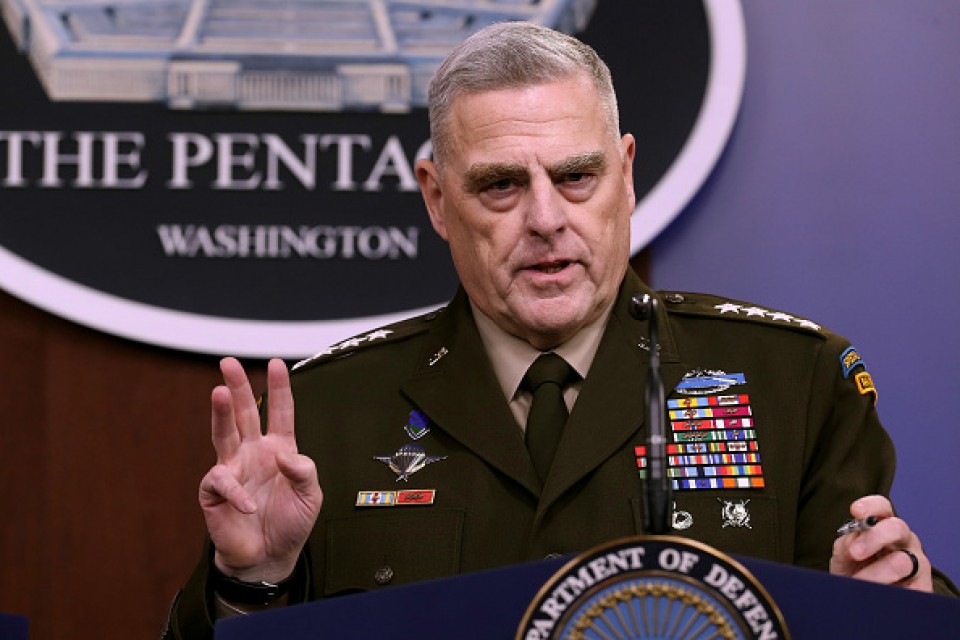 U.S. Chairman of the Joint Chiefs of Staff Gen. Mark Milley answers reporters' questions during a news conference at the Pentagon the day after it was announced that Abu Bakr al-Baghdadi was killed in a U.S. raid in Syria October 28, 2019 in Arlington, Virginia. (Getty/Kyodo)

The remarks echoed his view expressed to Congress last week that Beijing does not have the capability or intent to seize Taiwan through military means in the immediate future, in contrast with earlier warnings issued by top U.S. admirals portraying the threat as imminent.

Former Indo-Pacific Command chief Adm. Philip Davidson said in March that China could try to invade Taiwan "in the next six years." His successor Adm. John Aquilino also warned that "this problem is much closer to us than most think" without specifying by when he expected the Chinese military to become capable of invading the island.

At the Armed Services Committee of the House of Representatives, Milley said Wednesday that Davidson and Aquilino indicated in their comments that China is accelerating its military capability toward being ready to invade and seize Taiwan around 2027, six years from now, and that he does not "dismiss that at all."

"My assessment is an operational assessment. Do they have the intent to attack or seize in the near-term, defined as the next year or two? My assessment and based on what I've seen right now is 'No,'" Milley said, while adding that the analysis "can always change."

At the Senate Appropriations Committee on June 17, Milley said, in terms of capability, China has "a ways to go to develop the actual no-kidding capability to conduct military operations to seize through military means the entire island of Taiwan, if they wanted to do that."

"I think that there is little intent right now or motivation to do it militarily...and they know that. So I think right now the probability is probably low in the immediate near-term future," he said, while emphasizing it is "a core national interest of China" to unite Taiwan.

Defense Secretary Lloyd Austin also said on the same day at the Senate committee it is clear that annexing Taiwan is China's "goal" and that the United States remains committed to helping Taiwan defend itself such as through arms sales.

Beijing regards Taiwan as a renegade province awaiting reunification, by force if necessary. The issue is seen as a potential military flashpoint that could draw the United States into conflict with China.