Mizuho Financial Group Inc. said Tuesday its President and Group CEO Tatsufumi Sakai and 10 other executives will take pay cuts over a series of system failures that hit Mizuho Bank earlier this year, including many of its automated teller machines.

The measure was announced after a third-party panel concluded earlier in the day that the failures were due to poor operation and management rather than system defects.

"We take harsh criticism seriously," Sakai said in a press conference as he apologized to those affected by the system failures. He will have his remuneration halved for six months, while Mizuho Bank President Koji Fujiwara will receive a 50 percent pay cut for four months. 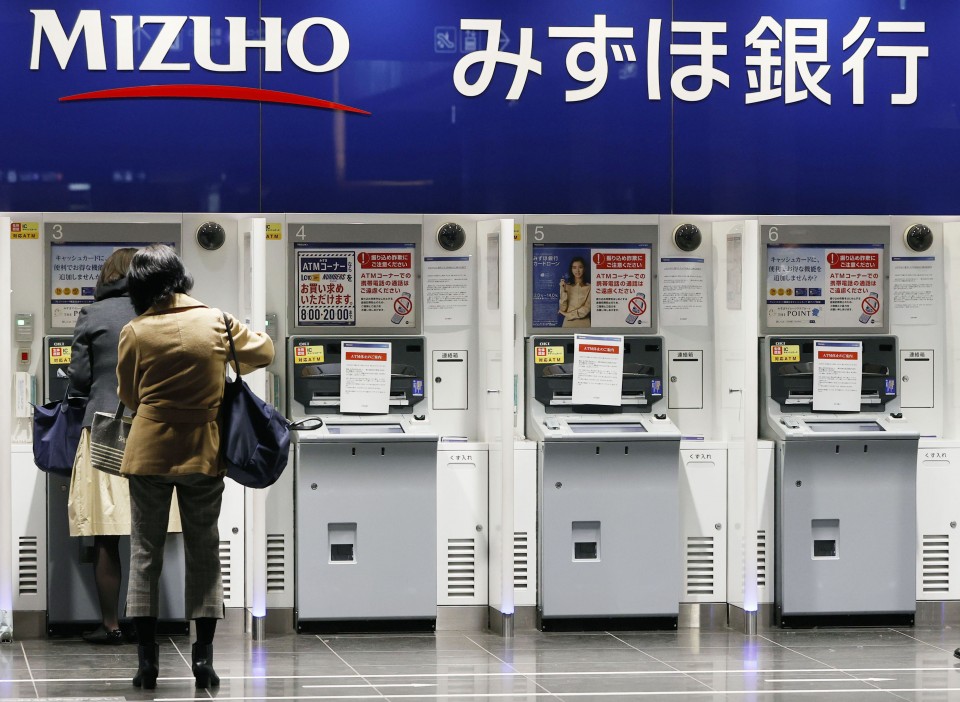 Mizuho Bank ATM services are seen out of service in Tokyo on March 1, 2021, due to a glitch affecting cash withdrawals and other transactions. (Kyodo) ==Kyodo

Four system problems occurred over about two weeks from Feb. 28, temporarily suspending over 4,300, or about 80 percent, of Mizuho's ATMs operating nationwide and leaving more than 5,000 bank cards and bank books stuck inside them.

When asked about the possibility that the executives would resign, Sakai denied there would be any leadership change, for the time being, saying the group will focus on measures to prevent a recurrence.

The parent of one of Japan's top three commercial banks said it will set up a panel to promptly implement preventive measures, such as holding drills against system failure and enhancing the communicative environment in the group by abolishing some senior positions.

The third-party panel consisting of lawyers and system management experts said in a report that human errors such as in the placement of technology-related staff and the company culture of hesitating to speak up during emergency situations to avoid liability issues caused the problem.

The report also said Fujiwara first learned about the ATM problems through news reports on the internet, suggesting the bungled initial response delayed information sharing with the management.

No common system defects were found in the four failures, the report said.

Prior to the first breakdown in February, when most of the bank cards and books became unreturnable, the report said the bank failed to identify the risk of running out of memory in the system as personnel rotation had prevented staff knowledgeable about the system from being involved closely in its operation.

On Feb. 28, its systems were overwhelmed when updating the status of fixed deposit accounts and processing other transactions.

The report said similar ATM problems occurred in 2018 and 2019, causing a total of about 2,000 bank cards and bank books to become stuck in machines, but they were not made public, and the company failed to review the settings of its ATMs.

Sakai said the issue in 2018 was not publicly announced as the bank knew who to return the bank cards and bank books to and deemed it was able to handle the situation. The report said the case in 2019 was not reported to the management team due to the small number of complaints.

The panel also said that Mizuho lacked consideration for its customers as it took only a reactive approach in the wake of ATM failures and forced many users to wait on site without any information.

The Financial Services Agency plans to issue a business improvement order against Mizuho, according to sources familiar with the matter.

The financial group had also suffered large-scale system failures in April 2002 and March 2011.