Shohei Ohtani crushed his 16th home run of the season Saturday off countryman Yusei Kikuchi, who made an early exit from the Los Angeles Angels' 12-5 win over the Seattle Mariners after being hit in the leg by a groundball.

Despite falling behind 1-0 on Ohtani's first-inning blast, Kikuchi was making a strong bid for his fourth win of the season when a comebacker drilled him in the right leg. 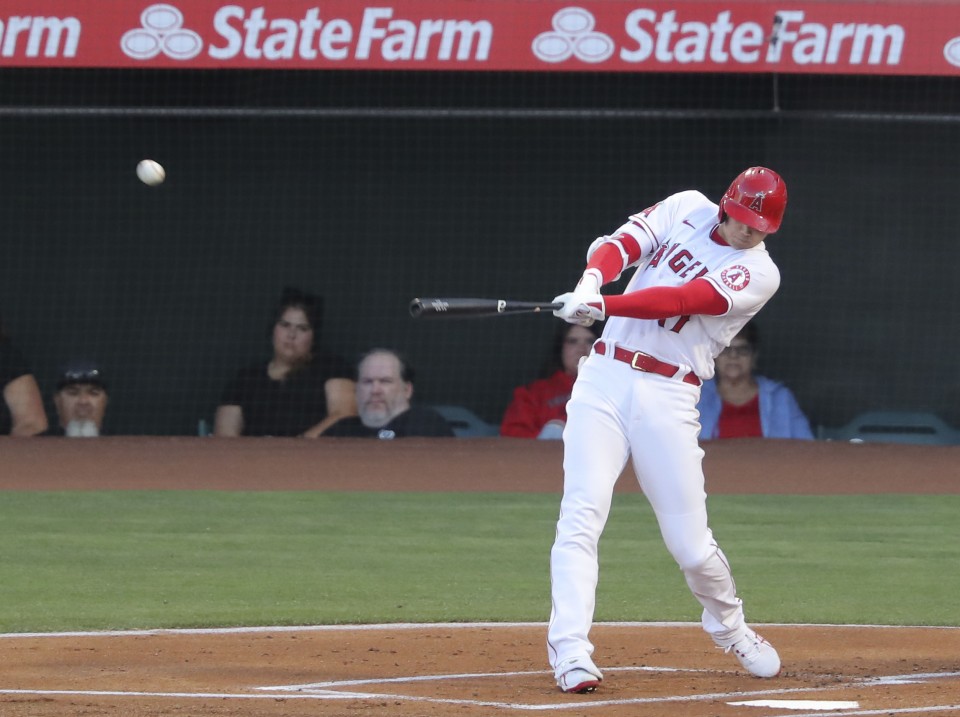 Los Angeles Angels designated hitter Shohei Ohtani hits his 16th home run of the season in the first inning of an American League game against the Seattle Mariners at Angel Stadium in Anaheim, California, on June 5, 2021. (Kyodo)

The left-hander fanned eight and allowed two earned runs on five hits before being assisted off the diamond with nobody out in the bottom of the fifth at Angel Stadium.

Kikuchi was diagnosed with a right knee contusion, but Seattle manager Scott Servais said he showed no signs of bone, ligament or joint damage and would undergo an MRI on Sunday.

The Mariners started the fifth leading 5-2, after scoring all of their runs against starter Alex Cobb (4-2) in the fourth, but the wheels came off for the visitors with Kikuchi's injury.

After adding two runs in the fifth, including one on a fielding error when Kikuchi was incapacitated on the ground, the Angels took a 6-5 lead in the sixth when Taylor Ward belted a two-run homer against righty Drew Steckenrider (2-2).

The Angels ran away with the game after scoring five runs in the eighth. Juan Lagares singled in two runs, Justin Upton doubled in two more and scored on an Ohtani double.

In the first big-league battle since 2019 between the two alumni of Hanamaki Higashi High School in northeastern Japan's Iwate Prefecture, Ohtani drew first blood with his line drive that went out to center field.

Batting second as the Angels' designated hitter, Ohtani barreled Kikuchi's first pitch, a 94.3 mile (152 kilometer) cutter, and sent it rocketing over the wall.

"All I thought about was hitting whatever ball came my way," Ohtani said.

Kikuchi threw a counterpunch in the third, striking out Ohtani swinging on a 2-2 slider in the middle of a 1-2-3 inning.

At Busch Stadium in St. Louis, Shogo Akiyama came up clutch with a sliding catch in center field to seal a 5-2 Cincinnati Reds victory over the St. Louis Cardinals.