It is now impossible to taste North Korea's flagship homemade beer in China's border city of Dandong, with leader Kim Jong Un apparently having little intention to let down his guard against the novel coronavirus. 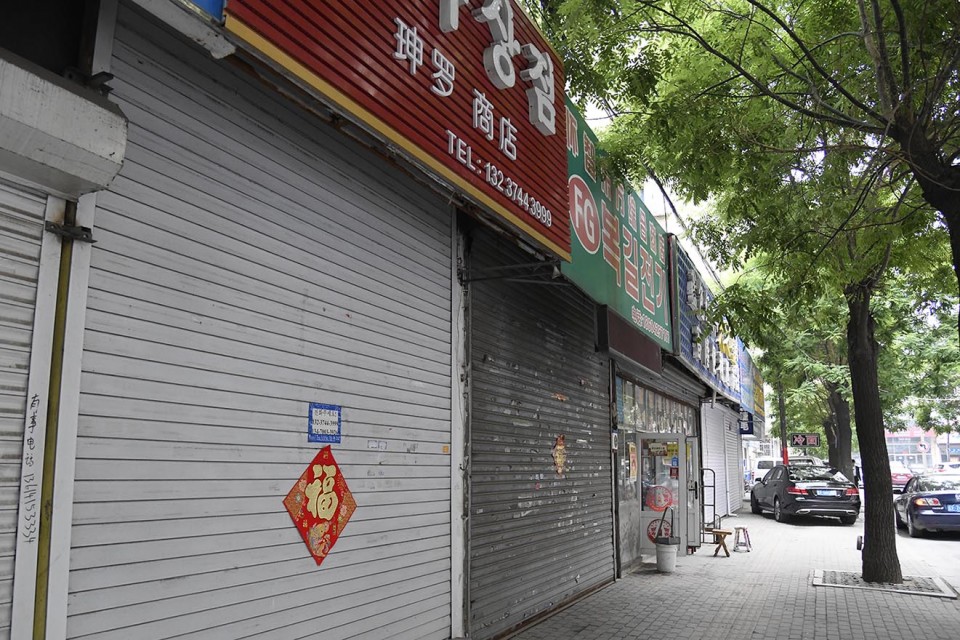 Photo taken from the Chinese border city of Dandong on June 7, 2021, shows shops, run by Koreans near the Yalu River border with North Korea, being shuttered. (Kyodo)

Earlier this year, expectations briefly mounted that North Korea and China would resume land transportation in a couple of months, but in fact, there are no signs in Dandong that restrictions on travel between the two countries will be lifted anytime soon.

Many citizens in China's northeastern city have become more pessimistic about the prospects of the regional economy, which is supposed to be buoyed by trade with North Korea as well as tourists intrigued by the mysterious, nuclear-armed neighbor.

After a highly contagious variant of the virus was confirmed for the first time in China in May, Pyongyang seems to be tightening security along the border river by mobilizing soldiers and wiring fences to prevent human intrusion into the nation. 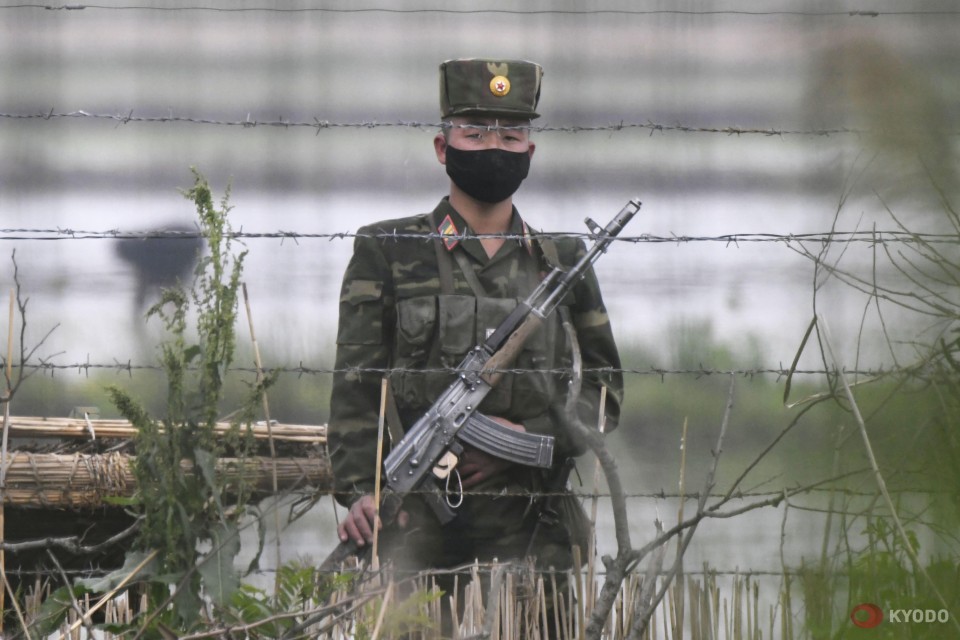 North Korea claims no infection cases have been found in the country, but it has cut off land traffic to and from China since early last year, amid worries that the virus, first detected in the central Chinese city of Wuhan in late 2019, could enter the nation.

The customs office near the Yalu River has been effectively closed as North Korea has banned its citizens from visiting China. Restaurants and shops run by Koreans in Dandong have been shuttered, with trade with the neighboring country choked off.

Popular tourist sites in the city, like the Tiger Mountain Great Wall and the Memorial Hall of the War to Resist U.S. Aggression and Aid Korea, have not been filled with people, even on sunny days, locals say.

"Before the pandemic, land shipments were active between China and North Korea, while a large number of those who are interested in Korea came to Dandong from both at home and abroad," a 51-year-old Chinese man said.

"People have been disappearing and the economy has become increasingly sluggish for the past one and half years. I hope China-North Korea trade will get back to a normal track in the not-so-distant future," said the man selling souvenirs in the city.

Although Dandong's economy grew 2 percent from a year earlier in 2019, it edged up only 0.4 percent in 2020 against a backdrop of a more than 20 percent dive in its trade with foreign nations including North Korea.

The sightseeing industry in Dandong suffered a crushing loss last year. The city's total tourism revenue slid 79 percent from the previous year and the number of inbound tourists plummeted 96.9 percent in 2020, according to the municipal government.

"The atmosphere in Dandong has been shabby. We have been losing resources to attract people from outside the city," a male restaurant worker said.

Tourism remains a key industry for Dandong's economy. Each room in a hotel facing the Yalu River was still equipped with binoculars to allow its guests to clearly watch the North Korean side. But the hotel is unlikely to be full of travelers for the time being.

In March, North Korea restarted imports of some commodities from China, such as chemical fertilizer, pesticide and herbicide. China, however, exported goods to North Korea by ship. 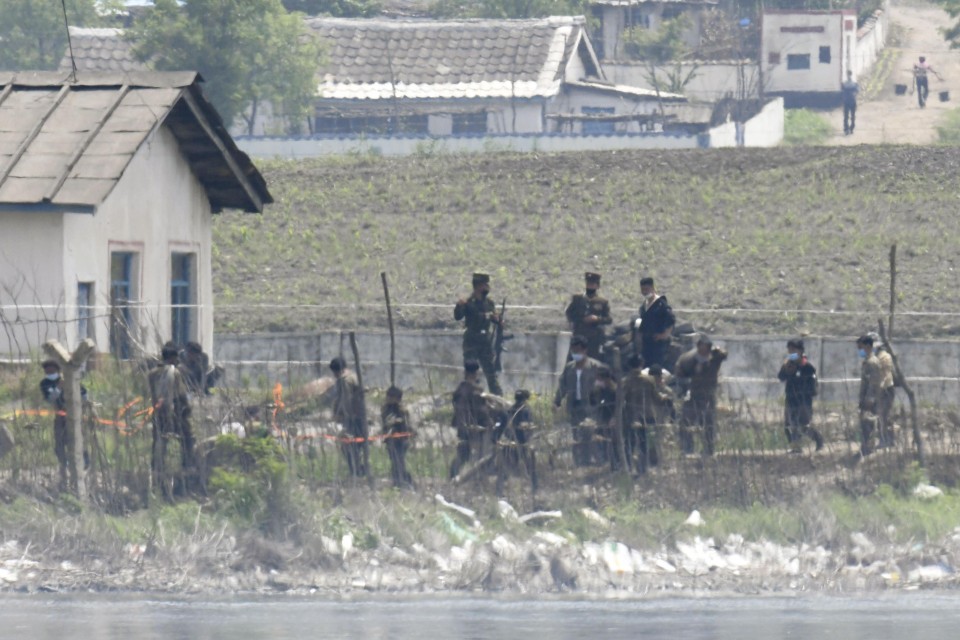 Photo taken from the Chinese city of Dandong on June 7, 2021, shows North Korean villagers working in a border area with China along the Yalu River under the supervision of soldiers. (Kyodo) ==Kyodo

China's trade with North Korea posted more than an over two-fold rise from a month earlier in April. Nevertheless, the total value accounted for only around 13 percent of that in April 2019.

Recently, China has been preparing to begin operations of cargo trains connecting it with North Korea. Yet, Pyongyang has delayed setting up disinfection facilities for imported goods, diplomatic sources said.

Following the detection in China's southern city of Guangzhou of the coronavirus variant first discovered in India, North Korea has become more vigilant against a possible outbreak in the country.

The Rodong Sinmun, the newspaper of the ruling Workers' Party of Korea, said in early June, "The highly infectious and lethal variant is spreading at a rapid pace globally."

It pointed out that current COVID-19 vaccines could be ineffective against the variant and emphasized the importance of strengthening anti-epidemic measures, dampening speculation that North Korea's border blockage might end soon.

North Korea's economy has also been languishing. In addition to a plunge in trade with China, agricultural devastation by powerful typhoons and flooding last year has sparked concern that its citizens may not be receiving adequate daily necessities.

In Pyongyang, some people have become severely malnourished, sources familiar with the situation in North Korea's capital said.

At the first congress of the ruling party in nearly five years in January, Kim pledged to make efforts to prop up the economy, while acknowledging North Korea failed to achieve the economic development goals set in its strategy through 2020 in almost all sectors.

North Korea, meanwhile, is believed to be vulnerable to infectious diseases in the face of chronic shortages of food and medical supplies triggered by international economic sanctions aimed at thwarting its nuclear and ballistic missile ambitions.

"Given that the Indian variant has been confirmed in China, North Korea would not open its border at least through the end of this year," one of the diplomatic sources said.