Hong Kong police are expected to come out in force on Friday to clamp down on any public gatherings held to commemorate victims of a bloody military crackdown in Beijing's Tiananmen Square in 1989.

The police, citing pandemic concerns, have previously banned hosting the annual candlelight vigil set for June 4 at Victoria Park, where hundreds of thousands of Hong Kong people had attended annually to mourn the victims killed in the student-led pro-democracy protest. 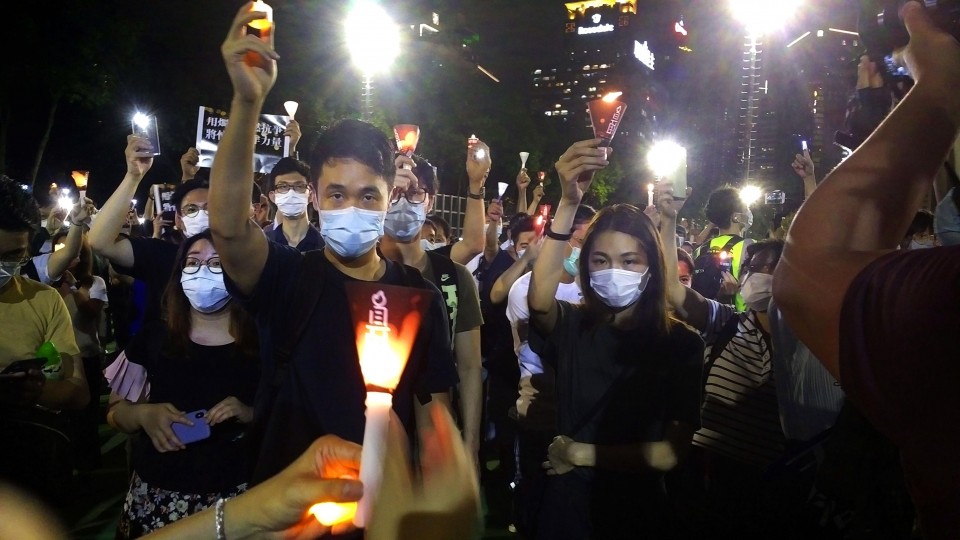 People hold up candles at Victoria Park in Hong Kong on June 4, 2020, to commemorate the 31st anniversary of the military crackdown on the pro-democracy movement centered on Beijing's Tiananmen Square in 1989. (Kyodo) ==Kyodo

More than 3,000 anti-riot police officers will be deployed to stop any possible unauthorized gatherings on Friday, the South China Morning Post, quoting a police source, reported.

Should people still gather for the memorial, the police will not be lenient to "bring deterrent effects after courts handed down lengthy jail terms to protesters," the police source said.

Last year, the annual event was banned for the first time since first being held in 1990, with authorities citing similar public health concerns. But the organizer defied the ban and continued hosting the vigil, drawing some 20,000 people at the park.

Last month, activist Joshua Wong and three others were given prison sentences after they pleaded guilty to the charge, while 20 others will face trials.

Richard Tsoi, secretary of the organizer, the Hong Kong Alliance in Support of Patriotic Democratic Movements of China, said the group will cease to host the vigil in the park and urged the people to mourn for the June 4 victims "in their own way."

Tsoi said the June 4 Museum, run by the group and documents the historic event with memorabilia exhibits, was closed Wednesday after government officials alleged that it lacks a valid operating license.

"In order to protect the safety of staff and visitors, the museum is temporarily closed until further notice," said Tsoi, who had planned to mourn at the museum on June 4. "It will not be easy to reopen the museum by then."

Security Secretary John Lee has warned that going to the candlelight vigil would risk breaching the law since police have banned it. But he would not say if chanting one of the alliance's slogans -- "end one-party dictatorship" -- would violate the national security law as some pro-Beijing politicians have asserted.

Beijing's parliament in June last year imposed the national security law in the territory, criminalizing acts of secession, subversion, terrorism and collusion with foreign forces, which could carry a maximum penalty of a life sentence.