The move to expand the target areas from seven prefectures in the Tokyo and Kansai areas comes as part of efforts to accelerate the country's inoculation drive. Many slots still remain vacant at the large-scale sites. 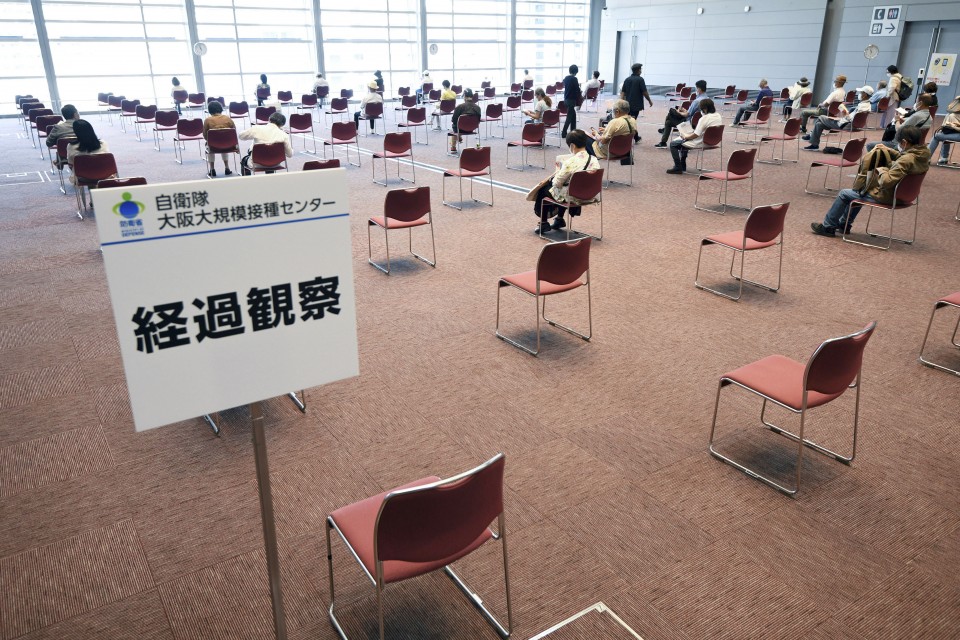 People receive a certificate proving they have been vaccinated for COVID-19 at a mass vaccination center set up on Osaka International Convention Center in the western Japan city on June 9, 2021. (Pool photo) (Kyodo) ==Kyodo

The government is planning to keep the venues open beyond the initially set end date of late August to achieve the goal, with the Tokyo venue already set for an extension.

To fill the vacant slots, the government will start accepting reservation requests by phone from 7 a.m. Saturday as well, the Defense Ministry said. The venues run by Self-Defense Forces personnel currently accept bookings from Tokyo, Osaka and neighboring prefectures.

Currently, the venues only accept online reservations via the ministry's website and the Line messaging app.

Addressing concerns that the expansion of the scheme could increase inflow of people to Tokyo and Osaka, senior vice defense minister Yasuhide Nakayama said at a separate press conference, "Traveling to receive vaccine shots is not considered as nonessential outings."

Such concerns come at a time the two areas and other parts of the country are under a state of emergency and the public is being urged to refrain from traveling across prefectures.

Nakayama, who is in charge of the mass vaccination program at the ministry, also indicated the ministry would further expand the scope of target to younger people with medical conditions and care personnel working at nursing homes in line with the issuance of vaccination tickets by municipalities.

Slots at the two large-scale centers, where people started receiving shots on May 24, initially filled quickly but the booking pace has since slowed.

The government will also consider having officials of the National Police Agency, Fire and Disaster Management Agency and Japan Coast Guard fill the vacant slots, the sources said.

Prior to the expansion, elderly people living in the capital and the neighboring prefectures of Saitama, Chiba and Kanagawa as well as in Osaka and nearby Kyoto and Hyogo prefectures are eligible for inoculations at the centers.

Japan aims to complete the vaccination of those aged 65 or older, as well those turning 65 this fiscal year, by the end of July, but the country's vaccination effort is lagging well behind other developed countries such as Britain and the United States.

About 4 percent of Japan's population of 125 million had been fully vaccinated as of Wednesday.