Pufferfish is a luxury winter delicacy in Japan, but a license is required to prepare and serve "fugu," as the fish is known, with any bite potentially containing a lethal toxic surprise.

Fugu is not commonly consumed in many other countries, but Vu Thuy Linh, a Vietnamese researcher at a university near Tokyo, hopes to cultivate the culinary art of the pufferfish in her Southeast Asian nation to create a bridge between the two countries. 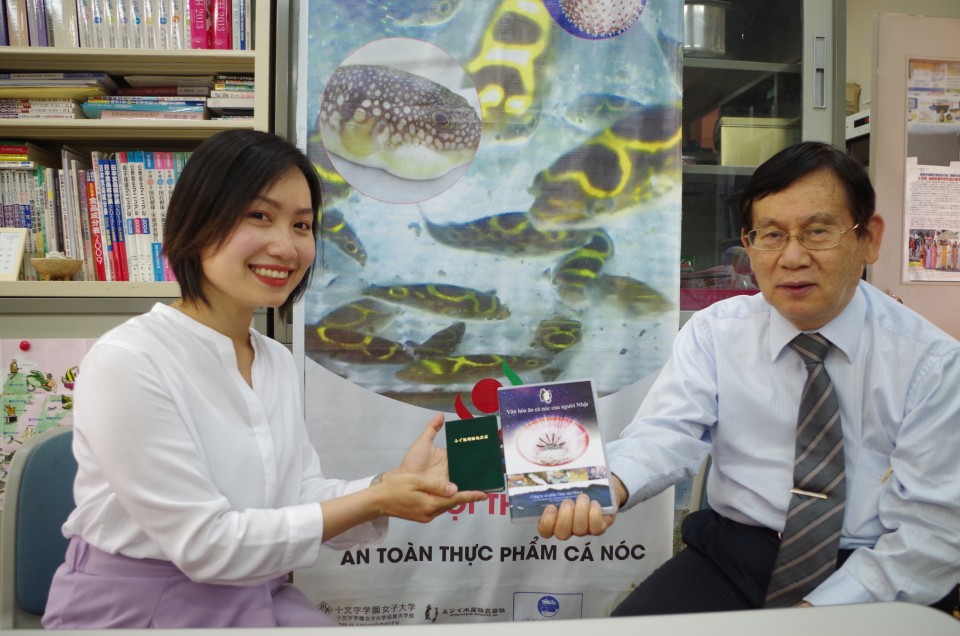 Photo taken on May 26, 2021, shows Vu Thuy Linh (L) holding her fugu culinary license and Shigeru Yamamoto, a professor of international nutrition at Jumonji University, with a DVD about safety precautions for preparing fugu. (Kyodo)

In Vietnam, a country with a long north-south coastline, about 60 species of fugu are believed to inhabit local waters, but national law has banned the sale and consumption of them since 2013, as a number of poisoning incidents have been reported due to unfamiliarity with how to handle the fish.

As Japan has an established set of regulations and techniques for dealing with pufferfish, Vu hopes to take such measures to Vietnam to allow its people to enjoy the joys of fugu dishes safely.

"In Vietnam, fishermen throw away fugu, because people are not allowed to eat them by law. But, it could be a great source of protein and could be a lucrative opportunity for the country," she said.

When Vu was studying Japanese at a university in Vietnam, she was surprised to learn that fugu is considered delicious in Japan and fetches a high price, with restaurants often charging over 10,000 yen ($90.00) per dish.

Having graduated university, she worked for about two years at Mitsui Suisan Co., a seafood processing company in Japan's southwestern prefecture of Miyazaki, and practiced cleaning, fileting and serving fugu. 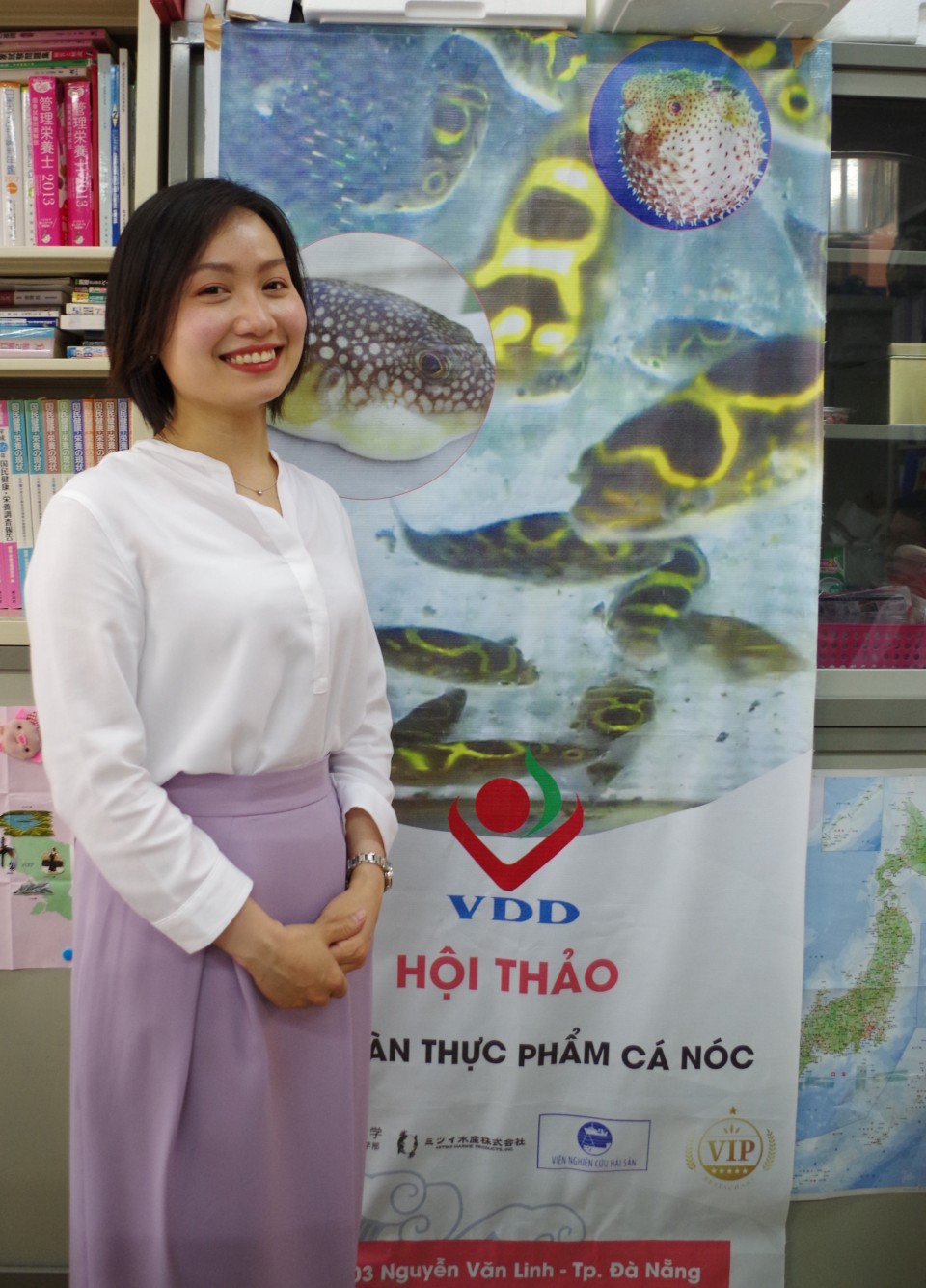 Vu Thuy Linh poses for a photo in a laboratory at Jumonji University on May 26, 2021. (Kyodo)

In Japan, any cook who intends to handle fugu is required to undergo exams to obtain a license proving they know how to remove the poisonous parts of the fish such as the liver and intestines. The health ministry strictly states which parts -- meat, skin and milt -- are edible in each fugu species.

Vu obtained a license in March, having passed written and practical exams including eliminating inedible organs containing the toxic tetrodotoxin without damaging them in 20 minutes as required.

According to licensing authorities, it is very rare for non-Japanese people to pass the exams, because applicants are required to meet certain criteria such as having obtained a cookery license in Japan.

Vu, now a researcher at the Asian Nutrition and Food Culture Research Center at Jumonji University, conducted a survey in 2017 in Hanoi and Da Nang to ask a total of 107 participants including the Vietnamese government officials -- who had never eaten the pufferfish before -- to rate fugu dishes prepared by a Japanese chef.

In the survey, fugu "sashimi" -- thinly sliced raw fish -- gained the highest score among all the fish dishes, although Vietnamese traditionally do not eat raw fish.

The feedback of fugu dishes, in general, was largely positive, with more than 80 percent of the respondents saying "I would like to eat more fugu."

"I am confident that Vietnamese people will like fugu from my research," she said, adding that they might first be afraid to try the fish due to its poisonous reputation.

"We need to establish rules and techniques like Japan so that people will feel assured to eat it," she said.

Vu continued her research on fugu to focus on the analysis of the fish's toxicity in hopes of creating a list of edible species inhabiting Vietnamese waters.

As part of efforts to educate local people, she also translated a video made by Mitsui Suisan into Vietnamese to share knowledge with Vietnamese people about safety precautions.

Japan currently imports pufferfish from China and South Korea, but not from Vietnam. Vu said, "If Vietnam abolishes the law banning fugu and establishes safety measures and techniques, then maybe Vietnam can export the fish to Japan."

Through her research involving the Vietnamese government officials, the 30-year-old hopes to call on the government to amend the fugu-banning law.

Since finishing her doctoral program, she has worked at Mitsui Suisan in a position in charge of business and trade, while further researching fugu at her university.

With the coronavirus pandemic continuing, she has not yet managed to conduct further research in Vietnam. But she is determined to carry on her studies to reach her goal.

"My dream is to cultivate the culinary art of fugu in my country and help local fishermen who could potentially profit."