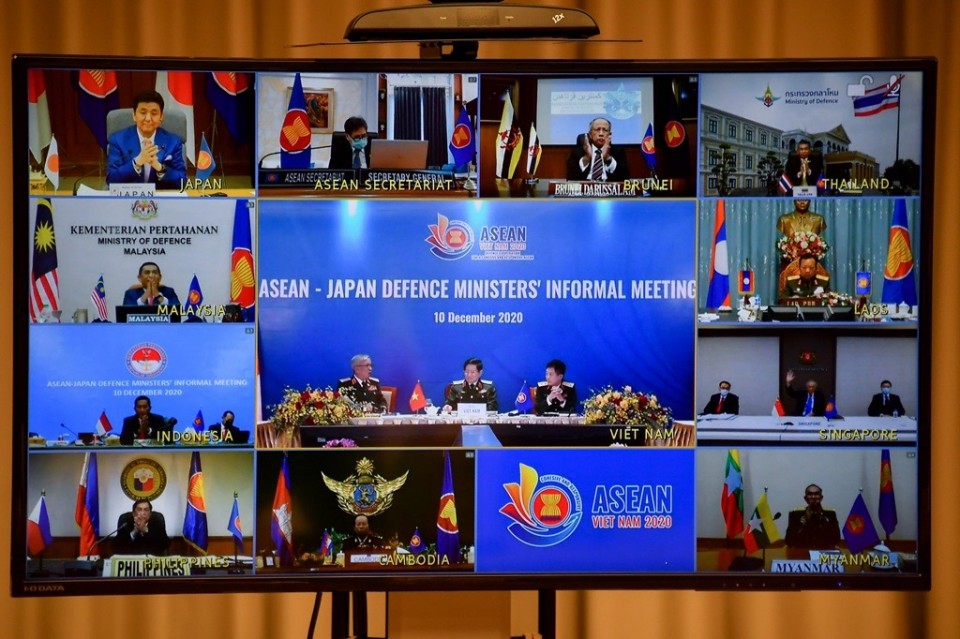 Japanese Defense Minister Nobuo Kishi (Top L) and his ASEAN counterparts are pictured on a screen in Tokyo on Dec. 10, 2020. (Photo courtesy of Japan's Defense Ministry)(Kyodo)

The annual meeting hosted by the 10-member Association of Southeast Asian Nations will be held via video conferencing due to the COVID-19 pandemic.

The hotline, known as the ASEAN Direct Communications Infrastructure, or ADI, aims to enable a dialogue to promote de-escalation of potential conflicts and to defuse misunderstandings and misinterpretations during crisis or emergency situations.

It is hoped that this will help to boost confidence and security-building measures in a region fraught with tensions such as the South China Sea territorial disputes and the contest for influence between the United States and China.

It aims to provide secure communication by voice, fax or email, according to a concept paper that ASEAN defense ministers adopted in 2019 to expand the ADI to the eight so-called "plus countries" outside the group.

According to a draft declaration seen by Kyodo News, the 18 defense ministers on Wednesday will "welcome the expansion of the ASEAN Direct Communications Infrastructure (ADI) in the ADMM Process to the Plus Countries."

The expansion, it says, will "strengthen strategic cooperation" and provide "a platform for engagement in dialogue and enhancing transparency, regional confidence and security building measures especially at the time of pandemic."

Only two of those eight countries have so far agreed to join, an ASEAN defense ministry official told Kyodo News.

"The launching of this expansion, if ready, is expected during the sidelines of the ADMM Retreat later in the year," the official said, referring to an ASEAN Defense Ministers' Meeting Retreat scheduled for Nov. 10 in Brunei.

Myanmar will be represented this time by junta-appointed Defense Minister Gen. Mya Tun Oo in the wake of the Feb. 1 coup that ended almost a decade of civilian rule.

Sources said Myanmar's political crisis might be raised by some of the ministers despite ASEAN's policy of noninterference in the domestic politics of other countries.