Tokyo Olympic organizers have reversed an earlier plan to allow alcoholic beverages to be sold to spectators at competition venues during the global sports event, sources close to the matter said Tuesday, as voices grew against apparent consideration for sponsors such as Asahi Breweries.

Organizers earlier planned to allow alcoholic drinks at venues of the games starting in around a month with some restrictions including time limits for selling them. 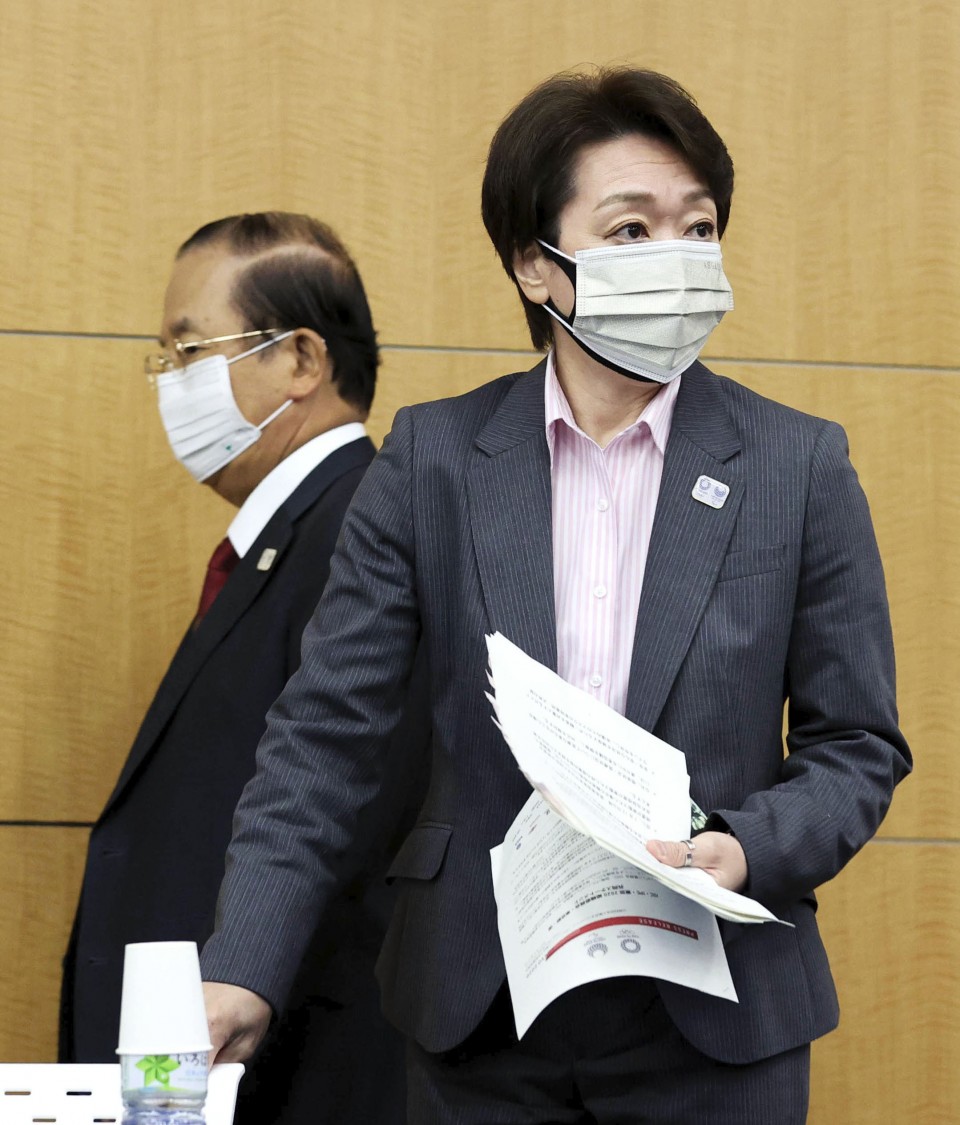 Seiko Hashimoto (R), president of the Tokyo Olympic and Paralympic organizing committee, and Toshiro Muto, CEO of the committee, prepare to speak at a press conference in Tokyo after attending five-party talks on the spectator cap for the Olympics on June 21, 2021. (Pool photo) (Kyodo)

They apparently judged that serving alcohol at the event would run counter to preventing the spread of the coronavirus, the sources said.

Olympic minister Tamayo Marukawa said earlier Tuesday in a news conference she expected the organizers to consider sufficient steps so that spectators will follow a request to show support only by clapping and refrain from shouting when making a decision on whether to allow alcohol at venues.

"Given the characteristics of the event, the organizing committee will take into consideration the fact that there are stakeholders," Marukawa said.

A guideline on spectators for the Tokyo Olympics, due to kick off July 23, will be unveiled later this week. In its draft, organizers ask spectators to refrain from eating and drinking in groups in passageways at the venues, and to travel to and from venues directly without stopping anywhere, as part of measures to reduce the risk of virus spread.

Seiko Hashimoto, president of the games organizing committee, said Monday the sale of alcoholic drinks to spectators is "being considered" but is dependent on whether people can be deterred from speaking loudly or shouting and whether they can observe safety protocols when moving inside the venues.

Rules currently in place for the general public in Japan will also be a factor in considering whether such beverages can be sold, she said.

But some lawmakers and medical experts voiced concerns about selling alcohol at venues as the country struggles to speed up the rollout of COVID-19 vaccines and businesses in Tokyo grapple with curbs on serving alcohol.

Haruo Ozaki, the head of the Tokyo Medical Association, said in a news conference the organizers should not allow sales of alcoholic beverages at Olympic venues.

"Are the Olympics an exception, after having placed a burden of anti-infection measures on restaurant operators for so long?" Ozaki said, adding he wants the organizers to "rethink" the plan under consideration to allow spectators to drink alcohol.

In Tokyo and other prefectures that are currently under a quasi-state of emergency through July 11, serving alcohol at restaurants and bars is conditionally allowed until 7 p.m.

In the capital, people are now allowed to drink alcohol alone or in pairs for up to 90 minutes between 11 a.m. and 7 p.m. at restaurants and bars certified as having taken steps to control infection.

On Monday, the organizers decided venues can be filled to 50 percent of capacity, up to a maximum of 10,000 spectators, following months of discussions on an attendance cap for local fans. Spectators from overseas had already been barred.