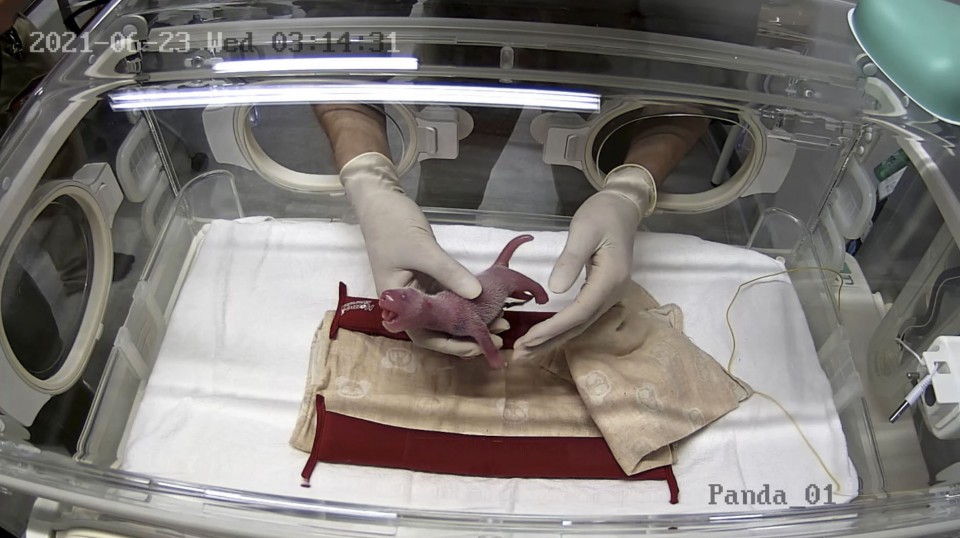 Supplied photo shows one of the newborn twin cubs kept in an incubator on June 23, 2021. (Photo courtesy of Ueno Zoological Gardens)(Kyodo)

Mother and cubs appear to be in good health, but as it is rare for a panda to nurture two cubs at the same time, one of the twins has been put in an incubator so it can be cared for by zookeepers. That cub weighs 124 grams, according to the zoo. The other cub is with its mother.

Shin Shin and her 15-year-old mate, Ri Ri, are also parents to a 4-year-old female, Xiang Xiang. The pair, on loan from China, also had a cub in July 2012, but the cub died six days after its birth due to pneumonia. 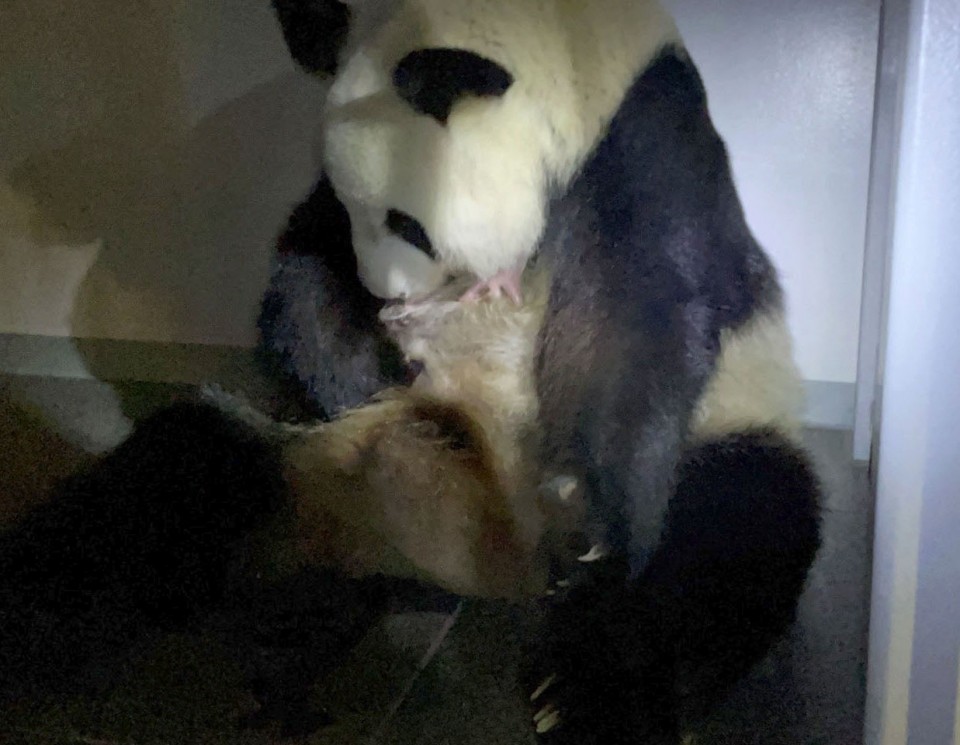 The news of the twins' birth helped share prices of restaurant chains in the Ueno area soar, while Chief Cabinet Secretary Katsunobu Kato welcomed it, calling the birth "very positive."

A Matsuzakaya department store in Ueno flashed a congratulatory message on an electronic billboard, while a clerk at a nearby cafe said she expects the twin's birth will "spark an inflow of visitors" to the area, which has seen tourists plunge due to the coronavirus pandemic.

The birth of the baby pandas is "a good thing for China-Japan relations and it is a very meaningful thing for the people of China and Japan to understand each other and strengthen the understanding and exchanges between them."

Recently, Sino-Japanese ties have become fragile over issues including the Japan-controlled Senkaku Islands, claimed by Beijing, in the East China Sea, and Beijing's security challenges posed to Taiwan and its vicinity.

Shin Shin was removed from display on June 4 to prepare for delivery, the same day the zoo reopened after a five-month closure due to the pandemic, after she had shown signs typical of being pregnant such as eating less and resting more.

"I was relieved when Shin Shin picked up her baby," Yutaka Fukuda, director of the zoo, told a press conference. "I was surprised and truly happy when the second one was born."

He said he hopes the twin can encourage and give peace of mind to people, adding, "I would like to ask for continued support for the panda family in Ueno."

Yoshiko Takahashi, 64, who visited the zoo from Kawasaki near Tokyo said, "I've been worried about Shin Shin since she showed signs of being pregnant, so I'm glad she gave birth safely."

A Tokyo panda fan in her 40s who frequents the zoo smiled after hearing the news and said, "I'm delighted because I had been in a dark mood due to the request to stay home" amid the pandemic.

Shin Shin and Ri Ri arrived at the Tokyo zoo in February 2011 from China, and their loan period has been extended to February 2026 due to uncertainty linked to the pandemic. Xiang Xiang, who also belongs to China, has had her loan period extended to the end of this year.

The Ueno Zoological Gardens, which opened in 1882, received its first pandas in 1972 from China, in commemoration of the normalization of bilateral ties.

Pandemic pushes back return of popular Tokyo panda to China