The Philippine community cheered after Filipino-Japanese teenager Yuka Saso was crowned as the U.S. Women's Open champion on Sunday.

Saso, who has a Filipino mother and a Japanese father and possesses dual citizenship, is the first Filipino to win a major and only the third Japanese woman to do so.

At age 19, Saso also matched the existing record for the youngest champion at the tournament, after outlasting Japan's Nasa Hataoka in a sudden-death playoff hole. She represents the Philippines in competition. 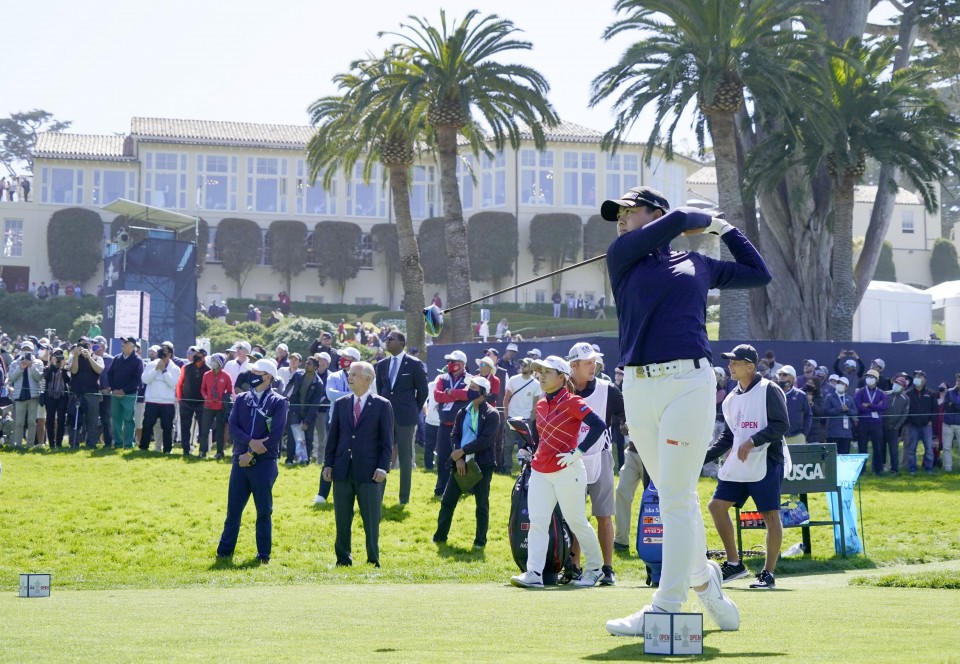 Yuka Saso hits her tee shot on the first hole of a playoff with Nasa Hataoka (red) at the U.S. Women's Open golf tournament at the Olympic Club in San Francisco, California, on June 6, 2021. (Kyodo) ==Kyodo

"We're very proud and happy for Yuka and for the Philippines," Bones Floro, secretary general of the National Golf Association of the Philippines, said by phone. "Yuka is the hero of everyone now. She's our role model."

"Obviously, we had a high hope...She has all the skills, and she has all the heart and the mind to actually win," Floro said. "Thank you for everything you do for our countrymen, and with your victory, continue achieving more and more," he added.

"Since the Jakarta Asian Games, Yuka has showed her excellent talent," commission chairman William Ramirez said, referring to her winning two gold medals for the country at the 2018 Asian Games, one in the individual event and another in the team event.

"Coached by her Japanese father, Yuka is a very humble young athlete. Very dedicated to her craft."

Filipinos on social media erupted after the news of the teen's feat. "#PinoyPride time! Bring out the flags and the chicken adobo!" Jason Rodriguez tweeted.

Saso's victory has also raised hopes among many Filipinos that she would bring home the first-ever Olympic gold medal of any sport for the Philippines during the Tokyo Olympics slated to start next month.

"Interesting to note that Filipinas are more likely to take home a medal in this year's Tokyo Olympics," Dino Maragay said on Twitter, mentioning Saso as one of several female Philippine athletes who could do so. "Filipina athletes rock!"

Saso was born in the Philippines and then moved to Japan. When she turned 8, she asked her father Masakazu, a golf enthusiast, if she could return to the Philippines because she really loves golf and she wanted to pursue it seriously, according to Floro.