At the outset of their in-person meeting in Seoul, Sung Kim, the newly appointed U.S. special representative for North Korea, expressed hope for a positive response from the North following U.S. overtures for dialogue. 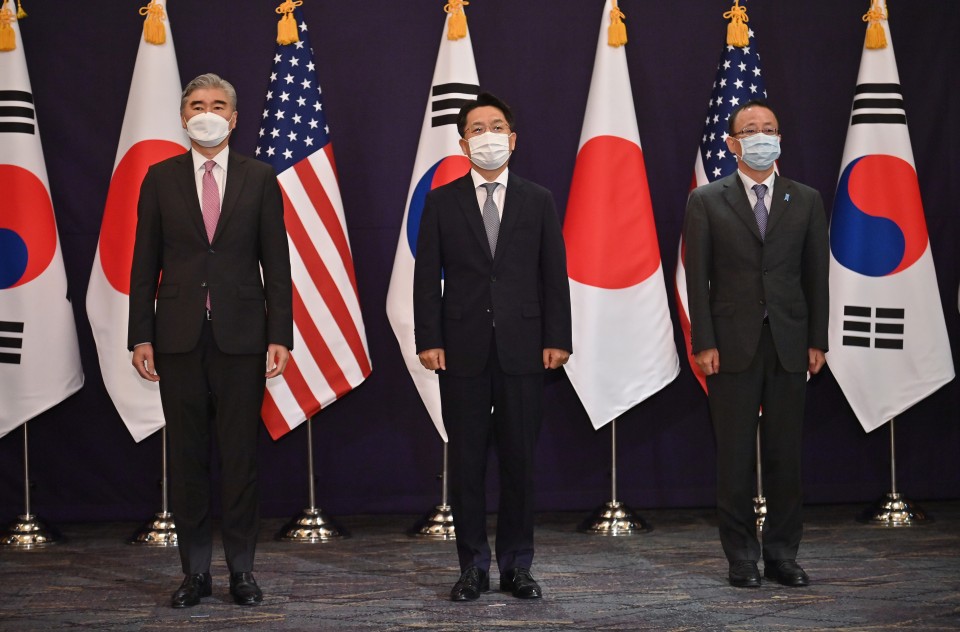 The three "agreed to continue cooperation among the three countries to bring effective progress in achieving complete denuclearization and permanent peace settlement on the Korean Peninsula by resuming talks with North Korea as soon as possible," the ministry said in a statement.

"We continue to hope that the DPRK will respond positively to our outreach, and our offer to meet anywhere, anytime without preconditions," Kim said at the outset. DPRK stands for the Democratic People's Republic of Korea, North Korea's official name.

The administration of U.S. President Joe Biden has recently finished a review of its North Korea policy and signaled its readiness for dialogue with North Korea, while building on a 2018 bilateral agreement that included Pyongyang's commitment toward denuclearization.

North Korean leader Kim Jong Un last week "stressed the need to get prepared for both dialogue and confrontation, especially to get fully prepared for confrontation" with the Biden administration, according to the state-run Korean Central News Agency.

Monday's meeting was the first face-to-face trilateral talks as U.S. special envoy for North Korea for Kim, who was appointed to the position last month. He doubles as ambassador to Indonesia.

"Our policy calls for a calibrated, practical approach that is open to and will explore diplomacy with the DPRK, as we seek to make practical progress that increases the security of the United States and our allies," Kim also said.

But the U.S. envoy indicated that Washington would also continue applying pressure on Pyongyang, stressing that U.N. Security Council resolutions against North Korea will continue to be implemented to address ongoing threats it poses to international society.

At the same meeting, Japan gained support from the United States and South Korea when it sought anew their understanding and cooperation on the abduction of Japanese nationals by North Korea in the 1970s and 1980s, according to the Japanese Foreign Ministry.

Funakoshi and Noh held a separate meeting on the same day, as Kim and Noh did before the three-way meeting.

At the first U.S.-North Korea summit in 2018 in Singapore, Kim Jong Un and Biden's predecessor Donald Trump agreed Washington would provide security guarantees to Pyongyang in return for "complete" denuclearization of the Korean Peninsula.

At his meeting with South Korean President Moon Jae In in May, Biden signaled that his policy would build on the 2018 agreement, focusing on the denuclearization goal as well as improving relations between the United States and North Korea.