The Japanese government is considering lifting the COVID-19 state of emergency covering Tokyo and other areas after next week but keeping some restrictions in place in order to prevent a resurgence of infections leading up to the Summer Olympics, an official with knowledge of the plan said Friday.

The state of emergency will likely end on June 20 as scheduled in most of the 10 prefectures covered, though some including the capital as well as Osaka may shift to a quasi-state of emergency. 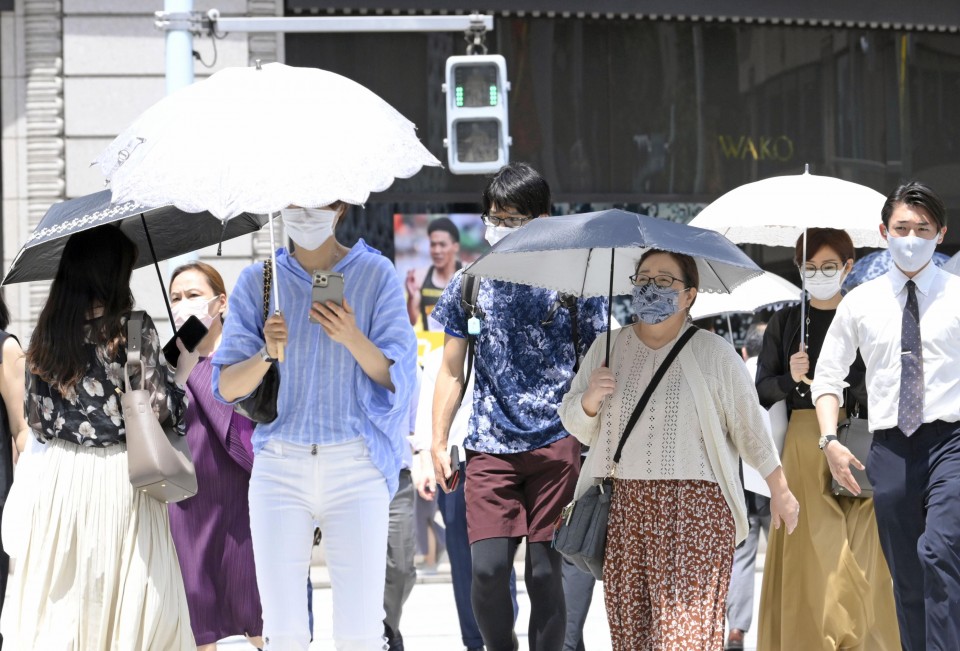 People wearing face masks during the coronavirus pandemic walk in Tokyo's Ginza area on June 11, 2021, with many holding parasols under the blazing sun. (Kyodo) ==Kyodo

In areas under the quasi-emergency, the government plans to continue requiring eateries to shorten their opening hours but may lift a ban on serving alcohol, the official said on condition of anonymity.

Prime Minister Yoshihide Suga will convene a task force meeting as early as Thursday to make a formal decision after consulting with members of his Cabinet including health minister Norihisa Tamura and Yasutoshi Nishimura, the minister in charge of the coronavirus response.

The prefectures currently under the state of emergency are Hokkaido, Tokyo, Aichi, Kyoto, Osaka, Hyogo, Okayama, Hiroshima, Fukuoka and Okinawa.

While some in the government have called for a total lifting of the state of emergency after June 20, others remain cautious, particularly as the medical systems in Hokkaido and Okinawa remain strained by COVID-19 patients.

The official said the capital may be put back under a quasi-state of emergency during the Tokyo Olympics and Paralympics from July 23 to Sept. 5 amid concern that the influx of athletes, staff and journalists from abroad will contribute to spreading the coronavirus.

Meanwhile, a subcommittee of experts is set to meet as early as Tuesday to discuss easing restrictions on spectators at major events being held in July and August, expected to apply to the Summer Games.

Currently, attendance at events such as sports games and concerts is limited to a maximum of 5,000 people or 50 percent of venue capacity.

Aside from Hokkaido and Okinawa, many indicators have improved to levels that justify lifting the state of emergency. A total of 1,937 new infections were reported across Japan on Friday, down from 6,000-7,000 daily at the peak of the fourth wave of COVID-19 in early to mid-May, with 64 deaths.

But as coronavirus cases quickly rebounded after the previous emergency ended in March, the government is wary of completely removing restrictions.

Among the eight prefectures currently under a quasi-state of emergency, which allows governors to target specific areas with measures rather than entire prefectures, Gunma, Ishikawa and Kumamoto will exit after this weekend.

Most or all of the remaining five -- Saitama, Chiba, Kanagawa, Gifu and Mie -- are set to see restrictions end as scheduled on June 20, the official said.