Facing criticism for a slow inoculation rollout, Prime Minister Yoshihide Suga had pledged 1 million doses a day to be administered nationwide by the middle of this month. 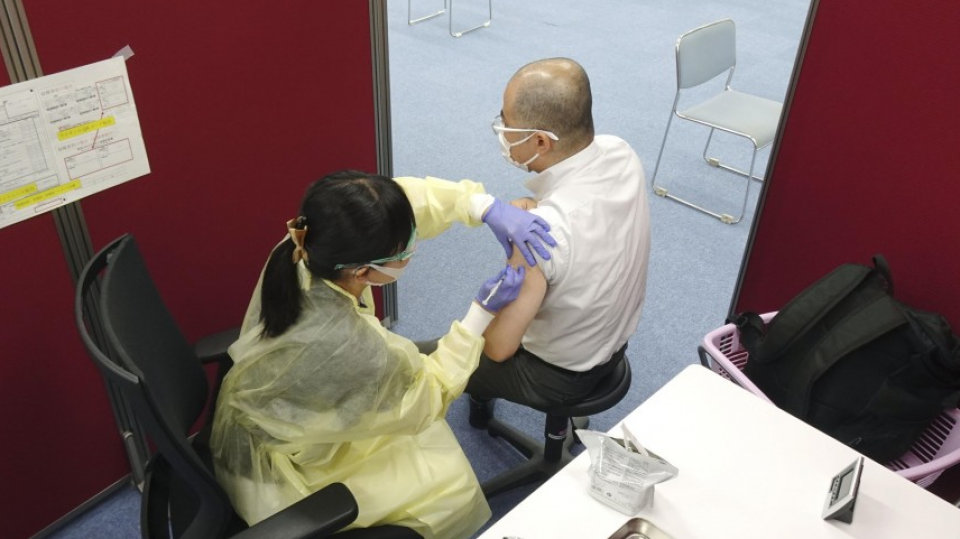 An East Japan Railway Co. employee receives a COVID-19 vaccine in Tokyo on June 21, 2021, under the company's mass vaccination program for its employees. (Kyodo) ==Kyodo

A total of 8.7 percent of the country's population of 125 million have received two shots, while 19.5 percent have received one shot, Kato said.

But with the start of the Tokyo Olympics a month away, the figures still lag behind other developed nations. The government aims to finish vaccinating all eligible people in Japan who wish to receive shots by November.

According to a government tally, 51.1 percent of those aged 65 or older have received at least one dose of COVID-19 vaccine as of Wednesday, with 17.5 percent finishing two shots, more than two months after inoculations for the age bracket started.

Nearly 80 percent of those in the age group are expected to be fully vaccinated by July 31 if the current pace keeps up, but the government aims to complete them by that time.

The inoculation program was launched in February for front-line health workers, expanded to those 65 and older in April and more recently to those under 65.

The vaccine rollout received a boost after state-run mass vaccination centers opened in May and the pace picked up further with the start this month of on-site vaccinations at workplaces and university campuses.

It remains unclear, however, whether the pace can be maintained. The government said Wednesday it is temporarily halting company applications for inoculations at workplaces due to concerns it will be unable to distribute doses quickly enough.

Applications for large-scale vaccination sites set up by prefectures will also stop immediately, Taro Kono, the minister in charge of the inoculation effort, told a press conference.